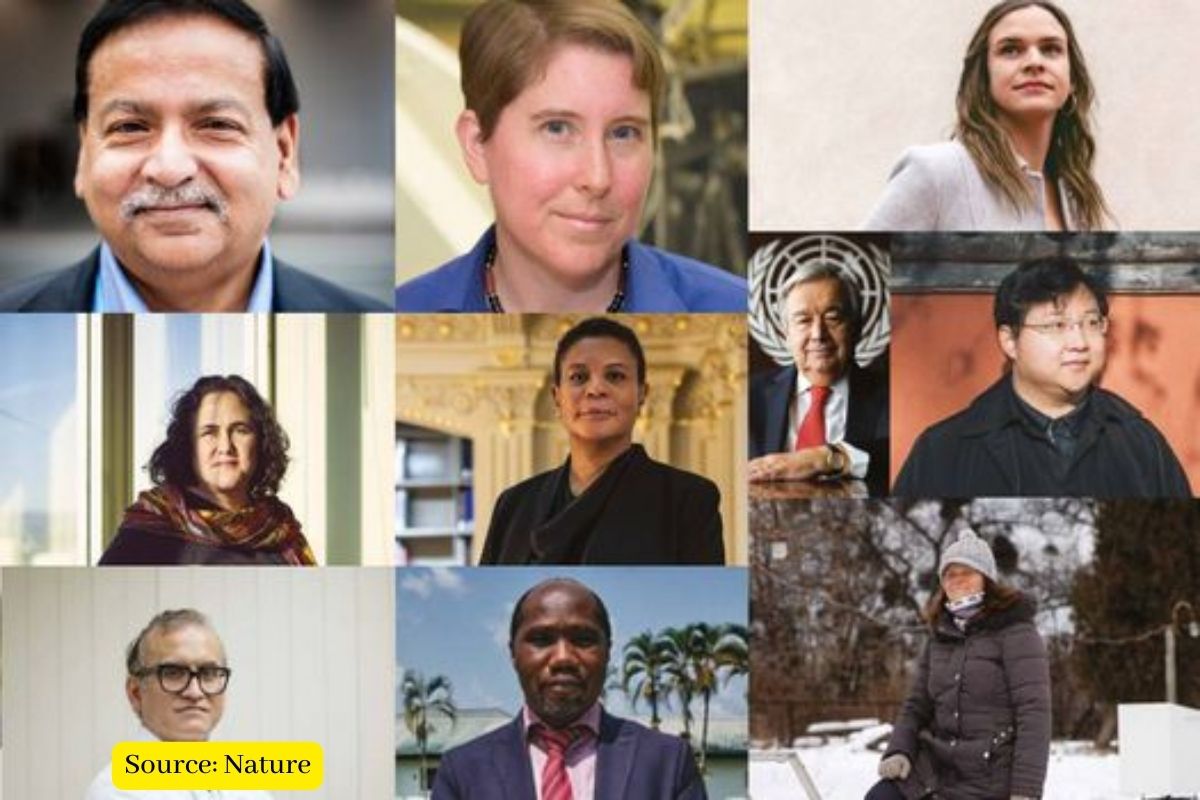 Every December, the prestigious journal Nature usually publishes a list of who were the most influential people in the year on science-related topics. These are researchers, as the magazine reports, who, together with their teams, helped make surprising discoveries and drew attention to crucial issues.

In a year filled with crises and astonishing discoveries, this year’s Top 10 list includes an astronomer who helped open a window to the far reaches of the universe, researchers who played a key role in fighting the coronavirus pandemic, covid-19 and the monkeypox outbreak, and a surgeon who exceeded the limits of organ transplantation”.

These are the people who are part of the list:

Some of the biggest science news of the year related to the James Webb Space Telescope, which, since its launch in December 2021, has allowed astronomers to begin to see the universe in detail they hadn’t been able to before. Among the many people involved in its launch, one was crucial: Jane Rigby, an astronomer at NASA’s Goddard Space Flight Center in Greenbelt, Maryland.

This American became involved in the project in 2010 and her work was instrumental in moving the project forward as scientists battled budget cuts. Likewise, her role was key, as reported by Agencia Sinc, in the measurement and understanding of the background light that filters in the JWST observations.

Rigby, who identifies as Queer, told Nature that his activism in the LGBT+ community has been key in honing his leadership in science.

One of the essential things during the covid-19 pandemic was the genomic research of the SARS-CoV-2 virus. Among the many people who have been in charge of this task in the world, for the editors of Nature, there was a key: Yunlong Cao, a genomics researcher at Peking University.

After returning home from the United States, where he began his doctorate, Cao realized that what he had learned would be useful, Sinc says, to study the antibodies triggered by the infection that causes the coronavirus. His work has helped to follow in detail the evolution of the virus and the mutations it presents. He also prefixed several of them.

“Cao’s team predicted the key mutations that would define many of the currently circulating variants, by studying antibodies from people who had recovered BA.5, its BA.2 ancestor, and earlier variants. These forecasts allowed the team to assess the variants’ abilities to evade immunity soon after they were identified, and often weeks before other teams.”

One of the main decisions made at the last climate change summit, which took place in Egypt, was the agreement for the richest countries to pay for the losses and damages that the poorest and most vulnerable nations are suffering due to the climate phenomenon.

Although it was a decision fraught with tension and contention, it could not have been made without the work of Saleemul Huq, a climate researcher from Bangladesh, a country that this year was affected by a strong winter wave.

According to Nature, for more than a decade, Huq has been the unofficial leader of that movement seeking a loss and damages settlement, which had been postponed for nearly 30 years. Originally a plant biologist, he now heads the International Center for Climate Change and Development in Dhaka.

“This human-induced climate change and the war against Ukraine have direct connections and the same roots: they are fossil fuels and humanity’s dependence on them. The ease of receiving energy from burning coal, oil and gas has changed the balance of power in the human world.”

Those were the words that Svitlana Krakovska said this year to the delegates of the Intergovernmental Panel on Climate Change in one of the plenary sessions. She, Ukraine’s representative before that group of scientists, has since then taken the spokesperson for her country on an international stage to link the current Russian invasion to the dependence that humans have on fossil fuels.

Krakovska, who heads the Applied Climatology Laboratory at the Ukrainian Hydrometeorological Institute in Kyiv, became an activist for climate action and for Ukraine. She has been on various international stages to speak about these two big problems, while her city struggles to get electricity, heat and water in winter.

After the world found itself in serious trouble overcoming the covid-19 pandemic, several countries began to face another difficulty: an outbreak of monkeypox, which causes monkeypox.

To detail more precisely what had changed compared to the outbreaks that had occurred in previous years in Africa, the work of scientists from that continent was key. Among them, Nature highlights Dimie Ogoina, a medical specialist in infectious diseases at the University of the Niger Delta in Amassoma (Nigeria).

Ogoina was crucial in understanding, for example, the spread of the virus. After studying it, he and his colleagues argued that it could spread through sexual contact between people much more efficiently than previously thought.

One of the consequences of the covid-19 pandemic was this set of sequelae that specialists in the world of health grouped under a term that has become popular: the “long covid“.

Although interest in this disorder has diminished, thanks to people like Lisa McCorkell, it is still on the radar of researchers. The efforts of this researcher from the United States have contributed to sensitizing people and her colleagues about this disease.

In fact, he is a founding member of the Patient-Led Research Collaborative and his work led to the creation of a $4.8 million fund for research projects.

“We are trying to put patients at the forefront of all kinds of research,” McCorkell tells Nature. “We have patients determine what our research priorities are and make the final decision about where this money goes.”

If there was one piece of news that shook the United States this year, it was the Supreme Court’s decision to strike down the country’s legal ruling on abortion access. What has been the impact of this measure? What consequences can it have?

Thanks to Diana Greene Foster, a demographer at the University of California, San Francisco, those questions are beginning to have answers. As SINC reviews, even she was already prepared for this decision and had begun planning a study to analyze the repercussions.

Known as the Turnaway study, with more than 50 articles published in scientific journals, it has shown that while having an abortion does not harm the health or well-being of women who do so, denying this option does have very serious economic consequences, as well as for the people’s health. It also hurts families.

The statements about the consequences of climate change that Antonio Guterres, the Secretary General of the United Nations, usually makes, go around the world.

He is direct with the main culprits and with the need to curb the consumption of fossil fuels.

That is why Nature magazine included him in the group of the ten most outstanding people in science. “We are on a highway to climate hell and we keep stepping on the accelerator,” he said, for example, at the Climate Change summit that took place this year in Egypt.

“Our planet is still in the emergency room,” was another of the messages he gave at the end of the meeting.

In the eyes of Nature editors, Guterres, a former Portuguese minister, has acted as the conscience of the world. “Guterres is a strong and important voice on climate change and biodiversity,” Måns Nilsson, executive director of the Stockholm Environment Institute, told Nature.

“He uses his convening power to mobilize heads of government and also companies on action against climate change in particular.”

One of the news that shocked the world this year had to do with the first transplant to a human of a genetically modified pig’s heart. Behind this exceptional event was Muhammad Mohiuddin, a surgeon at the University of Maryland School of Medicine (Baltimore).

The xenotransplant, as the transplant of an organ from an animal to a human is known in medical jargon, was performed on David Bennett, a 57-year-old American who suffered from terminal heart disease.

The patient, however, died two months after the operation. Despite this, for Mohiuddin and the medical team, he survived longer than anyone expected. “I lived and died with that patient. I wanted him to live forever, that was in my heart, but in my head I knew it would be a miracle,” he told Nature.

Alondra Nelson is a sociologist at the Institute for Advanced Study in Princeton, New Jersey, and is part of the team of the President of the United States, Joe Biden. From there, where she became the director of the US Office of Science and Technology Policy, she developed new guidelines on open science.

As Sinc reports, “he has directed the largest —and most controversial— scientific directive of the Biden Administration to date, a call to all federal agencies to ensure that the research they finance is fully accessible to the public at the time of its publication release”.

As Nelson told Nature, the Biden administration has a historic opportunity to promote equity through federal policies and strengthen scientific integrity across all agencies. “It’s an exciting time to be in government,” she said.