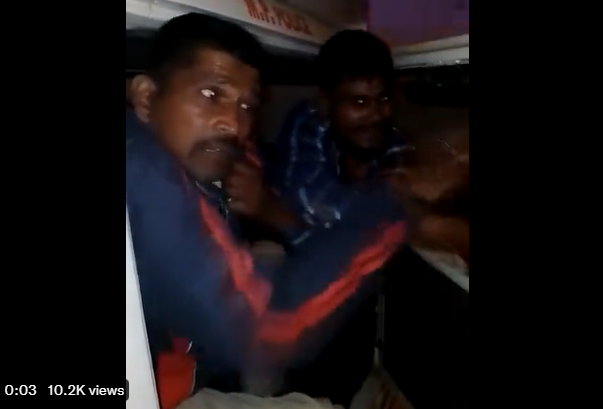 Ground Report | New Delhi: Thief beats police; Police took a criminal or miscreant to the police station or took out a procession, but in Bhopal, a miscreant slapped a constable on the occasion of Holi in Bhopal. He threatened the police that if anything happens to me, I will kill you till the police station.

In a viral video on social media, the young man was creating a ruckus on the road under the influence of alcohol. After that the police caught him. A case has been registered against the accused.

After the video went viral, former Chief Minister Digvijay Singh also asked the Director-General of Police if he is correct.

On Thursday night, Police Dial-100 reportedly received information that a young man was harassing after drinking alcohol at the new shelter near Noorani Masjid in Bhopal.

Constable Manoj Singh and Jagdish arrived at the scene from Dial-100. During the investigation, Naeem Baig (20), was found created a ruckus in the area. The policemen began to take him away in the car. Even during this, he did not calm down. He hit officer Manoj Singh inside the car. Seeing this, another officer, Jagdish, carried him into the car with the help of a stick. Somehow the police took him to the police station.

According to the Kamalanagar police station, Nafees was brought to the police station by dial 100 two days ago. He was drunk and abusing people. He was kept in the police station at night and was shifted to jail on Friday. An offence of obstructing official work has been registered against him.

Kamla Nagar police station in-charge Vijay Singh Sisodia said that Nafees’ record has not been found so far. He was intoxicated at the time of the incident. he added that the police have registered a case against him for obstructing the work of the government. (Thief beats police)