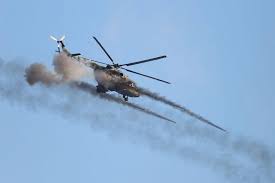 Russia has launched a full-scale invasion of Ukraine and is targeting cities with weapons attacks, Foreign Minister Dmytro Kuleba said in a tweet on Thursday. “Putin has just launched a full-scale invasion of Ukraine. Peaceful Ukrainian cities are under attack,” Kuleba said, referring to Russian President Vladimir Putin. “This is a war of aggression. Ukraine will defend itself and win. The world can and must stop Putin. Now is the time to act.”

Several explosions have shaken Ukraine in different cities, including the capital, Kyiv, after the announcement by Russian President Vladimir Putin to start a military operation in the Donbas region.

According to reports, at least four explosions have been reported in Kramatorsk, a powerful explosion in the Odessa region, as well as in Kharkiv and Berdyansk.

The explosions have also been heard in the capital, Kyiv, by residents of the Pozniaky and Troieschyna neighbourhoods. Meanwhile, explosions and shootings have been reported near Boryspil airport.

Ukrainian Foreign Minister Dimitro Kuleba confirmed on Thursday that Russia had launched a military operation to invade Ukraine “on a large scale” and urged the world to arrest Russian President Vladimir Putin.

“Putin has just launched a full-scale invasion of Ukraine. Peaceful Ukrainian cities are on strike. This is a war of aggression. Ukraine will defend itself and win. The world can and must stop Putin. The time to act is now.” , he said in a message on his official Twitter profile.

After Russian President Vladimir Putin announced on Thursday a military operation in Ukraine to defend separatists in the east of the country, Mexican authorities announced that the Kiev embassy is well and will be on the lookout for the protection of Mexican families.

At least two powerful explosions were heard by AFP journalists in central Kiev on Thursday shortly after Russian President Vladimir Putin’s announcement of a military operation against Ukraine.

In the port city of Mariupol, the main city controlled by Kiev near the front line in the east of the country, powerful explosions were also heard, AFP journalists confirmed.