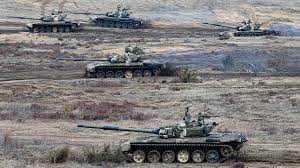 Ground Report | New Delhi: Russian invasion Ukraine; At least 40 people were killed within an hour of the Russian military offensive on Thursday. This was stated by an adviser to Ukrainian President Volodymyr Mirzelinsky.

According to the Associated Press (AP), Oleksiy Arstivovich, an adviser to President Volodymyr Mirzelinsky, said on Thursday that several dozen people had been injured. He did not say whether civilians were among those killed.
On the other hand, President Zelensky has claimed that the enemy has suffered heavy losses in the war.

According to the Reuters news agency, President Zelensky told his citizens on Thursday that those who wanted to fight for the country’s defence against Russian forces would be provided with weapons.

Russia on Thursday launched a full-scale offensive against Ukraine by land, air and sea, the largest state-to-state attack in Europe since World War II. President Zelensky says Ukraine has severed diplomatic ties with Russia since the attack.

The Ukrainian military has claimed in a Facebook post that it shot down a seventh Russian military plane.

“Joint forces have just shot down another Russian Air Force plane in the Luhansk region. This is the seventh occupant’s plane to be shot down by Ukrainian air defense units today. The attackers continue to suffer casualties.

However, Turkish President Recep Tayyip Erdogan has said that he rejects Russia’s military action on Ukraine. Erdogan said that both Russia and Ukraine are friendly countries of Turkey.

He said- We consider Russia’s military action in Ukraine unacceptable and reject it. This move of Russia is against international law. This is a big blow to peace and stability in the region.

He said- We will ensure the safety of the people of Ukraine and especially our citizens. The President of Turkey spoke to the President of Ukraine Zelensky on the phone. According to Erdogan, the talks took place on Russia’s military action and the latest developments.