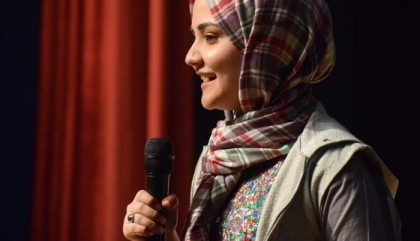 For hundreds of years, Kashmir’s Ladishah, a form of folk style, was dominated by men until modernity and militancy in the valley accelerated its decline. Now a woman emerged on the scene and captured the imagination of the youth.

Syed Areej Safvi, 25, has clearly become the first woman in Kashmir to satirize Ladishah in writing and performing, commenting on the social and political conditions in society. It is a type of folk song in which humor is an essential part of its performance.

Areej was made culturally familiar with this when he aired Ladishah every Sunday on the Urdu TV news channel. It was written by Kashmiri journalist Rajesh Raina and presented by Rajendra Tikku. Apart from his love for Kashmir culture and language, the immediate trigger for writing and performing Ladish was brought after constitutional changes that reduced the special status of Jammu and Kashmir to zero in August last year.

“I always wanted to do something for Kashmir and its culture and language. I personally like listening to Ladishah. Mostly I follow Rajendra Tiku ji, who performs Ladishah every Sunday. I wrote my first Ladishah on PSA (Public Safety Act) against Omar Abdullah and Mehbooba Mufti in December 2019.”

“Ladishah has a social message. This is an alternative opinion about issues in society and I am very passionate about this and want to do more on public speaking and social activism, ”she told Hindustan Times.

Traditionally Ladishah is played on stage, wearing a turban-like traditional dress and playing an instrument with his hands, a small iron rod with iron rings which is a ringing sound. The person sings critical comments using a commentary tone and tenor that brings the point home when taking on the establishment or people. Areej has adopted the vocals and tenacity as well as the material but does not yet use this instrument.

While traditional Ladishah used open platforms, theaters and then TV and radio platforms, Areej uploaded her videos on her YouTube channel, sometimes wearing a traditional karkuli cap on her head. Videos are becoming popular among the youth.

“After uploading the video I realized that I am the first woman to do so. I was expecting a big comeback but on the contrary I got huge support. Hateful messages have come, people who try to pull me down but I usually ignore them.

Areej, a resident of Alamgari Bazaar in Old City, graduated in Humanities and is pursuing post graduation in Psychology. From the very beginning she says that she is interested in writing, especially in Urdu language and poetry. She is commenting on the issues and writing ghazals before living in Ladishah style.

Her subjects are not only social, but also political, criticizing not only society but also the establishment. She has demonstrated arrest of journalists, ban on 4G internet, VPNs, women’s issues, dissipation in marriage, Ladishah against others. The only child of her parents, she said her father and mother have been supportive, but there are people in the extended joint family who are not comfortable with their choices.

“To do anything in our society requires a lot of courage and patience. I love it so nothing can stop me. There are people who are not okay with me, but I am trying to convince them of my choice” She said.

She said that she was getting messages from the youth, especially women. “There are people who now say that if she can do it, then we too can pursue our choice.” There are women who text me and say: ‘Thank you very much, now our parents also think that we can do whatever we want’, “she said.

The 77-year-old satiric poet of Kashmir, Zarif ahmad Zarif, who retired as a cultural officer of the Jammu and Kashmir government, said he had only seen men performing Ladishah.

“I had not seen any woman in Ladish till now. This is a forward movement. Ladishah has been a traditional character of Kashmir culture and if Areej really wants to turn her interest into an art, if she wants to start a new chapter of this art, she has to adopt it with full attention, including its means Is, ”he said.

People associated with writing Ladishah say that it went into oblivion due to the situation in Kashmir Valley. Before the end of militancy in the Valley in 1989, Zarif, who wrote Ladishah for Doordarshan and Theater, said that the art form is in decline.

He said, “Before militancy, we used to do drama as well as Ladishah regularly in drama clubs in the old city. “

He said that the folk theater of Kashmir, which was part of the Ladishah band Pather, performed in open spaces even when Kashmir was ruled by the Maharajas. “With their live performances and special costumes, the band Pather used to be a form of entertainment for kings and commons from olden times. And when a pause is required during the performance, a ladish will come out to present his solo performance, ”he said.

He said that Ladishah was critical but full of humor. “If people wanted to convey their problems to the king, Ladishah presents it humorously so that he makes him aware of the issue but does not resent him at the same time,” he said.

He said that Ladishah would go from village to village and go to the city to perform. “In villages, he will be given rice while in cities he will get some money for his performance.”

“Ladishah was a male dominated style but now a girl from Kashmir is coming forward which is a big thing. People are also appreciating that girls are now coming forward to adopt Ladish. We should encourage her.