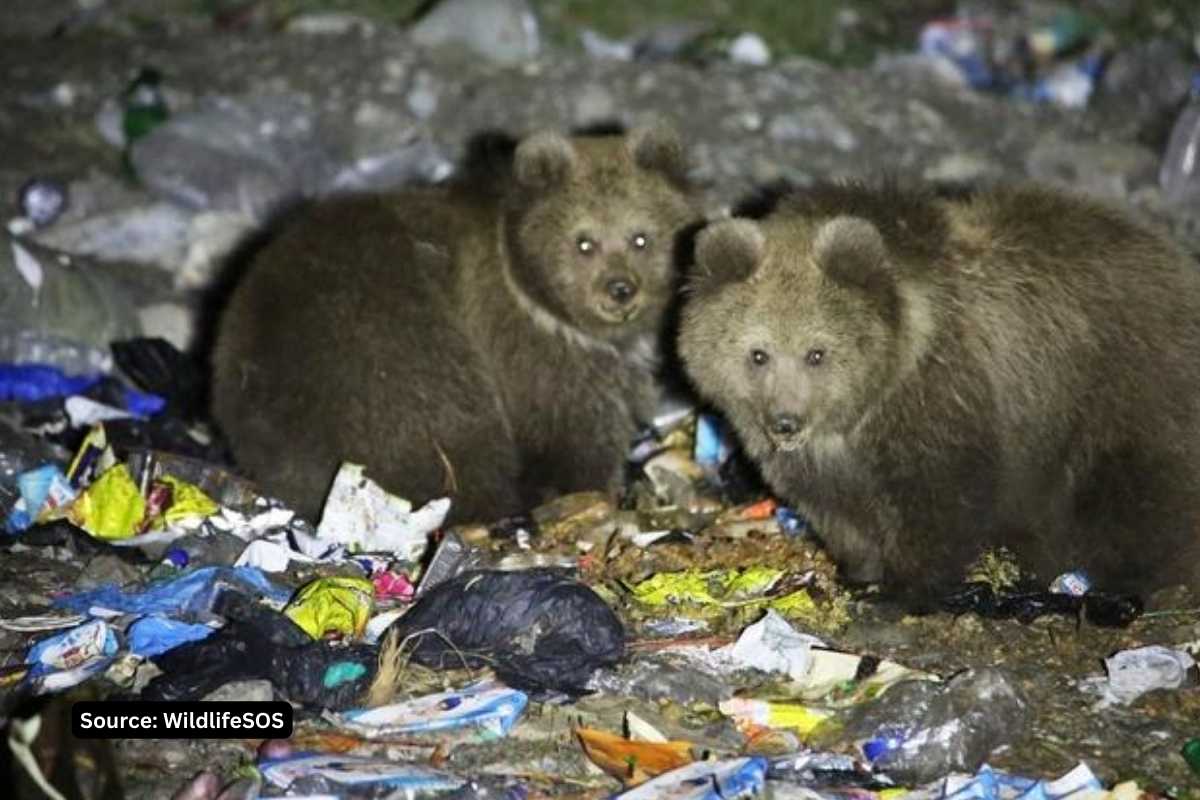 A study on brown bears in Kashmir by Wildlife SOS found that the bears consume food from the garbage, including plastic bags, milk powder, biryani, and chocolate wrappers.

The Wildlife SOS team conducted a comprehensive analysis of the brown bear’s diet. “This was done by studying the feces of 408 brown bears, the results of which revealed that 86 bears excreted plastic bags, powdered milk, and chocolate coatings in their feces.

The report is titled “Investigation of the ecological and human-bear conflict of the Himalayan brown bear (Ursus arctos isabellinus) in Kashmir with special reference to the habituation of bears to garbage dumps in the Central Wildlife Division”.

The study area included the Thajwas (Baltal) Wildlife Sanctuary, Sonamarg, Laxpathri, Nilgrath, and Sarbal villages, as they are critical habitats for bears and major tourist destinations. Sonamarg, in particular, was chosen because of its role as a bear habitat that extends to Zojila.

Brown bears most frequently visited the SDA Sarbal midden, the Army Transit camp middens, and the Amarnath holy camp middens. At the SDA garbage site, we observe a minimum of 3 to a maximum of 11 garbage vehicles disposing of 50 to 550 kg of food and other waste every day.

Some droppings even had traces of glass in them! Up to 75% of everything brown bears eat comes from garbage, which means that their frequency of scavenging is much higher than eating wild plant matter, crops, and even hunted sheep,” according to the report published by Wildlife SOS.

The report has found that, like their counterparts in Yellow Stone National Park, Himalayan brown bears are also “raiding” trash and are quickly getting used to this.

The Wildlife SOS team conducted an in-depth analysis of the brown bear’s diet following authorization from the J&K Department of Wildlife Protection to study the scats of 408 brown bears.

“The results revealed that 86 bears have excreted plastic bags, powdered milk and chocolate coatings in their droppings. Some droppings even had traces of glass,” the study found.

Footage of bears in garbage dumps

The study found: “The findings from the stool analysis were strengthened by data collected from camera traps. Of the 20,627 camera trap images, 9,131 images captured chilling footage of grizzly bears scavenging for food in garbage dumps. Their natural diet of fresh plants, insects, and small mammals has been replaced with improperly discarded high-calorie foods, like the famous Indian biryani!

The team also found vital information about Himalayan brown bears that was previously unknown. Using the random encounter model to estimate animal density with the aid of camera traps, the density of brown bears at Thajwas Wildlife Sanctuary was found to be 1.5/km².

The rate at which bear signs such as scat, tracks and feeding signs were found was 0.12/km, with signs recorded only in the north-western (Sarbal) and eastern (Amarnath) regions.

Impact of feeding on garbage

The study was conducted to assess anthropogenic pressure on brown bear habitat, assess and mitigate human-bear conflict, and brown bear dependence and habituation on middens.

It’s not just the bears; the research team also found evidence of other species, such as the Himalayan marmot and the elusive Asiatic ibex eating garbage. Such evidence points to the dire need to implement mitigation measures promptly.

“The scat analysis findings were bolstered by data collected from camera traps, 62% of which captured chilling footage of grizzly bears scavenging for food in garbage dumps. These elements of waste can be harmful to human life” gastric intestinal structure of the brown bear, leading to severe ailments and shortening its lifespan. This behaviour can also be passed from mother to cub, leading to complete loss of natural feeding traits,” said Swaminathan S, biologist senior at Wildlife SOS.

These garbage dumps were likely to attract and serve as easy food for wildlife. The search for bears in garbage dumps could be attributed to immediate factors such as food availability, palatability, habitat degradation, and final factors such as nutrient requirements and an increase in body mass. In addition, the expansion of tourist activities and sacred pilgrimage leads to habitat fragmentation and destruction.

The study area revealed that the livestock population of goats and sheep was 24,950 in 101 different herds. The predation of livestock and the predation of crops were the main forms of conflict. Cattle grazing, migratory pastoralists (dhars), and development activities are threats to the conservation of Himalayan brown bears.

Threats to the Himalayan Brown bear

In the Ganderbal district, central wildlife division of Kashmir, the Himalayan brown bear is found in rolling highlands, alpine grasslands, and subalpine forests.

Habitat degradation is mainly due to the unsustainable use of alpine regions, increased biotic pressure, and habitat fragmentation. In addition, due to encroachment on forest lands and continued habitat degradation over time, the status of brown bears remains in jeopardy in this area, but at the same time, it is creating a more contentious situation.

Considering the safety of the local population and pilgrims, it is important to consider the following recommendations to ensure that current and future conflict situations between brown bears and humans are minimized.