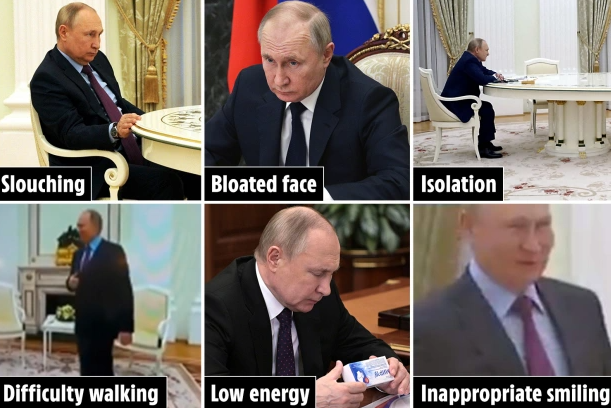 Ground Report | New Delhi: Vladimir Putin disease; Vladimir Putin, 69, had been missing for a week and had not made any public appearances. However, the president of Russia has reappeared before the media this Friday, on the sixteenth day since the war against Ukraine began after it was commented that he could be hiding in a luxury nuclear bunker in Siberia with his closest family, among which would be his daughters. Another rumour suggested that he could be isolated because he was sick and had a supposedly weak immune system.

To this, we must add the great physical change that Putin has experienced since 2019. His transformation has not gone unnoticed by many and has raised the alarm that he could suffer from some disease. As you can see in the before and after photo, it is clear that he has a much more swollen face.

The most widespread rumour among experts and several people who have known about his career for years is that Putin is sick with cancer and therefore, he would not be in the best conditions to make public appearances or they would be minimal.

Several people point in this direction. A retired admiral from the British Royal Navy, Chris Parry, said last week that Vladimir Putin could be battling cancer. “I think his immune system could be depressed. So he is a man who is in a hurry,” said the military man to justify how to precipitate the invasion of Ukraine was.

Here are some signs that could point to Putin’s growing physical and mental frailty.

Also Read:  How sinking of Moskva made war difficult for Russia?

“He frequently looks down and to the side, going to the table and the floor and rarely looks at his subordinate.”

Bucy told The Sun Online: “This is an aged, bloated, physically weakened version who appears to have come out of a long period of isolation and perhaps a physical illness. He also notes “visible signs of malaise and discomfort” in his speech.

The abnormally large conference table used by Putin in his recent public appearances has been widely mocked. However, Bucy notes that the 13-foot table size, supposedly for social distancing during the pandemic, could indicate “discomfort with close contact, another sign of physical illness or frailty.”

Parkinson’s is a neurodegenerative disorder that affects movement, usually on one side of the body. Symptoms are gradual and tend to start with a small tremor that begins in the hand or fingers.