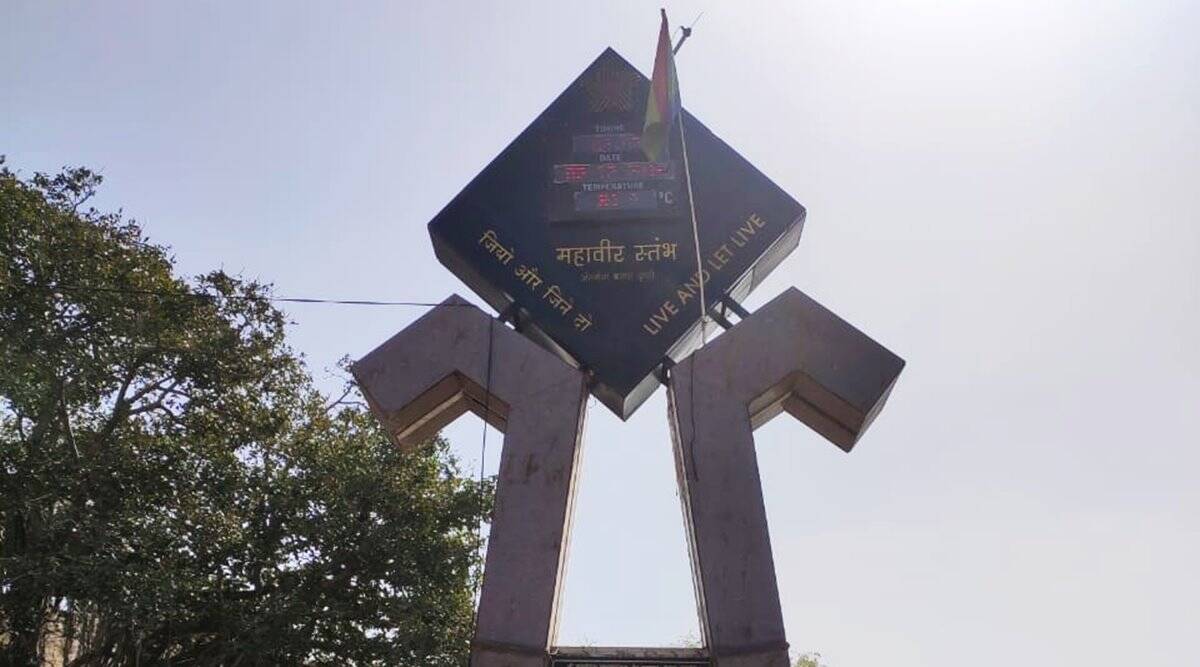 The Archaeological Survey of India (ASI) is preparing to remove the Jain Kirti Stambh, established in 1974 near the World Heritage Ellora Caves. ASI says that it was built without permission. This spoils the view of Ajanta Ellora Caves and many street vendors have occupied its surroundings making it look unsightly. Because this place is a world heritage, no construction can be done here. Jain society has opposed this. They say it is here for 48 years, why suddenly it started looking bad. We take out a rally from here on the occasion of Mahavir Jayanti. It will not be allowed to be removed at any cost.

What is Jain Kirti Stambh?

The Kirti Stambh was constructed 48 years ago in 1974 at the entrance of the caves to commemorate the 2500th Nirvana Utsav of Lord Mahavir. The slogan of live and let live has been written on the pillar. Above it is a clock showing the time and temperature. It is the pillar of non-violence. From here, on the occasion of Mahavir Jayanti, the people of the Jain community gather together and take out the procession and hoist flag.

What is the Kirti Stambh controversy?

The Archaeological Survey of India has planned to beautify the main entrance of the Ellora caves. Under which they want to make a direct path to the caves. The department considers the Jain pillar established for about 48 years as a hindrance in this work. They believe that since the caves belong to three religions, it is inappropriate to have a pillar of any one religion next to it. The Archaeological Department is proposing to replace the Jain Kirti Stambh with the stone nameplate written with the text ‘World Heritage Ellora Caves’ in Devanagari and English.

The surprising fact is that Jain society was not even informed about it. They neither knew about the action nor they were consulted. However, the Archaeological Survey of India claims that it has sent a letter by post to Dr. Prem Kumar Patni, Secretary, Jain Gurukul Vidya Mandir Trust. But Dr. Patni said in a conversation with Lokmat News that he has neither received any letter nor has any information been received in this regard.

ASI says that since Ellora caves are registered by UNESCO as a World Heritage site since 1983 and no construction work can be done within 100 meters of it. For this reason, a request has been made to the Jain society to remove the Jain pillar.

On one hand, the Archaeological Department is presenting its side and citing the letter dated December 2021, while on the other hand, Jain society is feeling ignored in the decision-making process about dismantling of the 48-year-old pillar. Due to this, there has been an atmosphere of rage and surprise in society. The people of the society have decided to strongly oppose it.

The Ajanta Ellora caves are located in the Western Ghats, 30 km from the city of Aurangabad in Maharashtra. Here are the pillars and caves of the three religions born in India. The confluence of Hindu, Buddha, and Jain religions can be seen at this place. Here one gets a unique glimpse of Indian culture, where different religions worship together. This place was developed in about four kingdoms by cutting more than 100 rocks. One reason for the three religions to come together here is that the Jain emperor’s wife worships Shiva and her son is a follower of Buddhism. UNESCO declared it a World Heritage in 1983.

Presence of Jainism in Ellora

The Jain caves here were built in the 9th and 10th centuries. The Jain caves were built by the Yadava dynasty. Of the 34 rock-cut caves, 1 to 12 are Buddhist, 13 to 29 are Hindu and 30 to 34 are Jain caves. Indra Sabha, Jagannath Sabha, and Chota Kailash Caves are the most famous Jain caves.