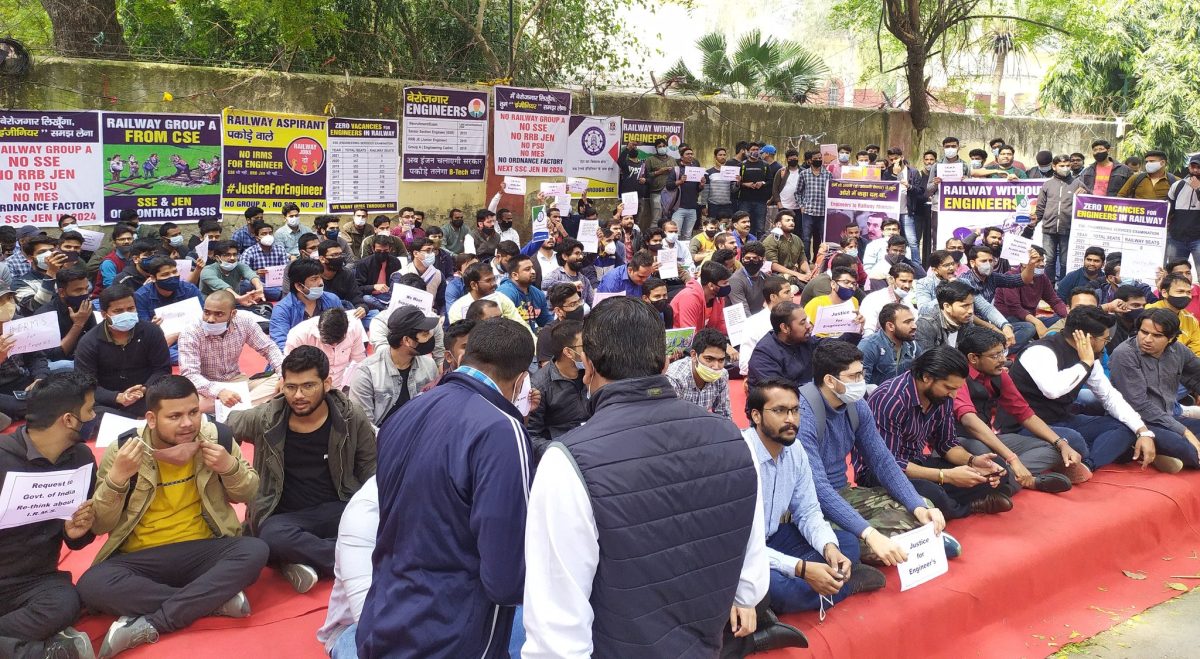 Ground Report | New Delhi: IRMS Engineers Protesting; Following the announcement by the Ministry of Railways that the government has decided to recruit 150 personnel in the Indian Railway Management Service (IRMS), Group A through Civil Services Examination-2022 instead of Engineering Services Examination (ESE), engineers took to social media to speak up against the decision.

IRMS has released an official notification that reads, “The Government (Department of Personnel & Training) has issued a notification dated February 17, 2022, affecting the inclusion of the IRMS, Group ‘A’ in the list of Services for recruitment through the Civil Services Examination-2022”.

“As per the decision taken by the Government for increasing the access of unemployed to job opportunities, the Commission will publicly disclose the scores of the candidates (obtained in the Written Examination and Interview/Personality Test) through the public portals. The disclosure will be made in respect of only those willing candidates who will appear in the Interview/Personality Test for the Civil Service Examination and are not finally recommended for appointment,” the official notification reads.

Following the implementation of the IRMS, all recruitment will be through a common exam conducted by UPSC when candidates indicate their preferred area of ​​specialization.

However, two thorny issues remain to be clarified, including the mechanism that will be used to determine seniority, pay and advancement paths for existing A-class officers, and how engineers will be recruited in the future.

The policy change and the challenges surrounding it come at a time when Indian Railway is already dealing with multiple issues. Engineering students say there has been no hiring on Indian Railways Class A services for the past two years. Now, the IRMS Vacancies hiring process has changed.

IRMS aspirants are protesting at Jantar Mantar and candidates also took to Twitter to raise their voices. They are protesting on Twitter as well with the hashtag – #JusticeForEngineers #IRMS_through_ESE.

“There has been no recruiting in Indian railways’ Class A services for the past two years, and now there are no openings for engineers in the IRMS,” said Suraj Sharma an aspirant in his tweet.

Nishiket Surwade an aspirant tweeted “IRMS through CSE is totally dissatisfied decision engineers manage everything tech and management IRMS is our right group A vacancy in railway is aim so please IRMS conduct through ESE.

Another aspirant tweeted “IRMS will be recruited through CSE, After removal of more than 250 seats of Railway Group A post from ESE, It’s really heart wrenching & appalling when highly qualified & well deserving engineers are living with depression & distress”.

However, the latest notification is welcomed in principle by the railway fraternity even though there are some ambiguities regarding the composition, functions and designation of officers.

The cabinet decision to recruit officers of the new IRMS (Indian Railway Management Service) through the Civil Services Exam must be applauded and supported! @PMOIndia @narendramodi It will bring a good blend of technical and managerial expertise within Indian Railways.

In another tweet he said “Unlike popular belief, a technical organisation like Railways does not necessarily need technical minds in middle to high positions. It needs those who can bring in new ideas, provide leadership at various levels and understand the needs of citizens.”

At present, Indian Railways is run by Officers from 8 services recruited through the Civil Services Examination and the Engineering Services Examination. Merging these multiple services under the umbrella of one service would certainly dilute the siled structure of work. Railway departments consist of technical (engineering) and non-technical (administrative).