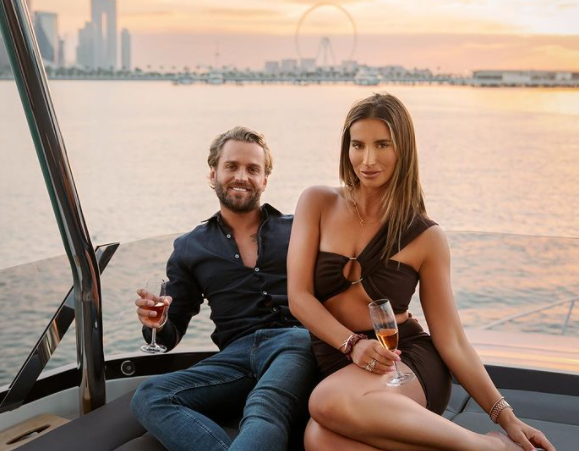 Lorri Haines, also known as Lozza, works in property and describes himself in his Instagram bio as: “Full time geek, part time jeweller, wannabe entrepreneur.” Recently in a video he was seen sniffing white powder. He is half naked, Partying and sniffing white lines.

Who is Lorrie Haines?

He is in news because he is boyfriend of Ferne Alice McCann who is an English model, television personality and presenter. Ferne has a child with ex Arthur Collins who is serving 20 years for injuring 14 people in an acid attack in a London club. Haines runs a high-end jewellery firm, investment business and software company relies on an image as a decent, trust­worthy businessman to promote investments in Bitcoin and other products.

What’s in the video?

He twice scoops up powder from a bag. At one point, a pal can be heard shouting: “No, No Ket, No Ket.” The man tells tattooed Haines to “put the Ket down”, before he is seen chucking a packet on to a table. The footage was taken in a Dubai apartment. Haines told The Sun about the footage that he was not taking drugs and was “joking about’’. But a source said: But this tape, even if it shows him joking about, suggests questions about his judgment.

Haine breaks into a dance during the 32-second video as he raises the substance to his face As he tipped his head, Ferne’s lover seemed to be sniffing the substance.

Watch Full Video on The Sun