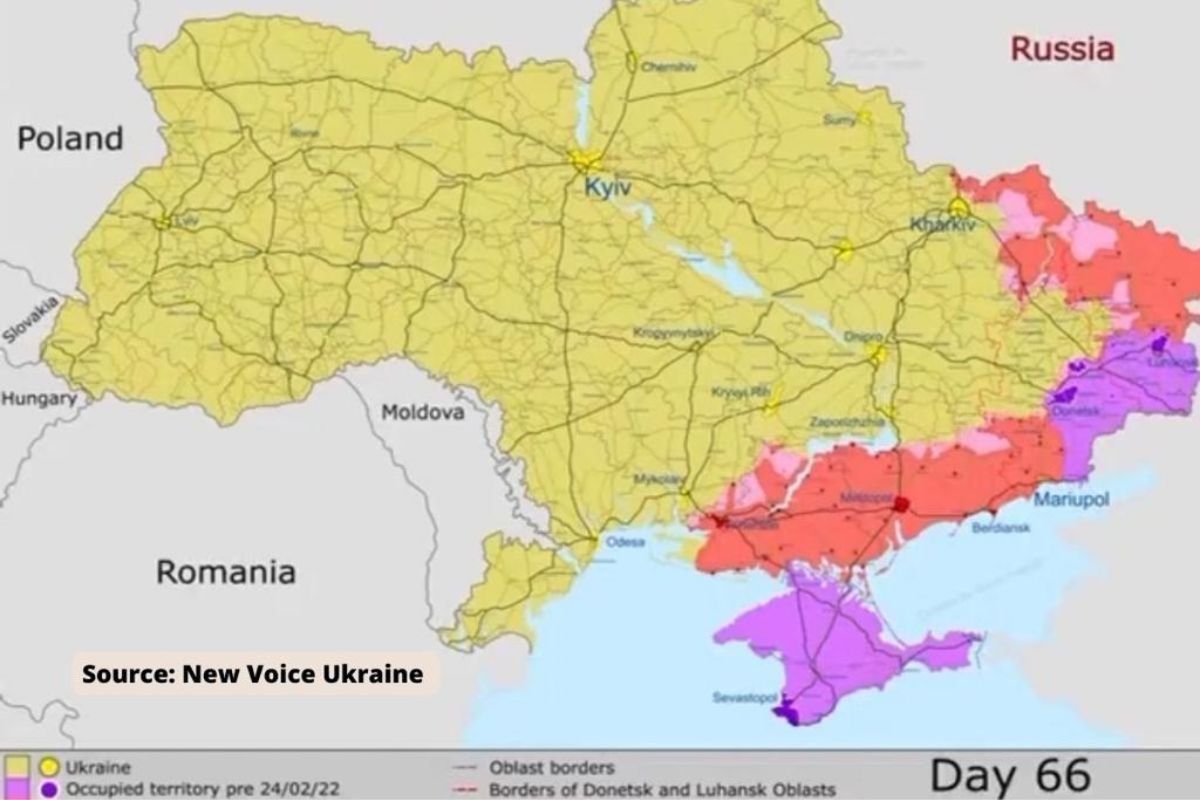 Russia launched a military operation in Ukraine on February 24 this year, how much area has Ukraine recaptured from Russian. Last month, Ukrainian soldiers recaptured Husarivka, a farming village with a peacetime population of 500-600 some 150 km southeast of the city of Kharkiv, after heavy fighting following the Russian invasion on February 24.

On Apr 02, Ukrainian authorities say their forces have recaptured the town of Brovary, 20 kilometers (12 miles) east of the capital Kyiv.

The focus of the conflict on Donbas has shifted after Russia failed to capture Kyiv during the first phase of the war. The Russians were defeated by a combination of factors, including geography, the rudeness of the attackers and modern weapons, as well as Ukraine’s ingenuity with smartphones and pieces of foam mat.

According to officials, Ukrainian troops have recaptured hundreds of villages around Kyiv and other districts. The recaptured cities were left with the scars of five weeks of fighting, destroyed armoured vehicles, military equipment and dozens of bodies scattered on the streets.

February 24: Putin announces the start of a “special military operation” in Ukraine.

February 26: The United States, France, Germany, Italy, the United Kingdom and Canada announce the expulsion of certain Russian banks from SWIFT, the highly secure network that connects thousands of financial institutions around the world.

February 28: Talks between the Ukrainian and Russian delegations on the situation end.

March 3: Ukrainian and Russian delegations meet for the second time at the border with Belarus to try to reach an agreement to cease hostilities.

March 4: Zelensky calls the Kremlin’s efforts to seize the Zaporizhia nuclear power plant “unprecedented terror,” and again calls on NATO to establish a no-fly zone over his country.

March 5: US and NATO officials believe Russia is now ready to “bomb cities until they surrender” and could deploy up to 1,000 more mercenaries to Ukraine.

March 6: A Russian attack hit a civilian evacuation point on the outskirts of Kyiv, reportedly killing eight people, including two children, as they tried to flee their homes.

March 7: The third round of talks between Russia and Ukraine takes place, which does not meet Russian expectations, Russian presidential adviser Vladimir Medinsky, who heads the Russian delegation for talks with Ukraine, announces on Russia 24 state television.

March 8: Ukraine says a planned evacuation route is already underway to help civilians leave the northeastern city of Sumy, which has suffered continuous Russian attacks and airstrikes in recent days.

March 9: The Ukrainian military agreed to a 12-hour ceasefire with Russia on Wednesday to allow civilians to flee through humanitarian corridors, including from the besieged city of Sumy.

March 10: Zelensky says the Mariupol hospital bombing was “proof of genocide” and reiterates his call for NATO to declare a no-fly zone over the country. International condemnation is also growing.

March 11: President Joe Biden announced that the United States and its allies will revoke Russia’s “most favoured nation” status.

March 12: Several hundred people protested outside the city hall of the southern Ukrainian city of Melitopol following the arrest of Mayor Ivan Fedorov by Russian forces.

March 13: Russia launches a missile attack on a military base near Lviv, a city near the Polish border. 35 people died. American journalist Brent Renaud was killed by Russian soldiers; Colombian-American reporter Juan Arredondo was injured.

March 14: Russia asks China for military aid and economic support in Ukraine, according to two senior US officials.

March 15: New satellite images show widespread destruction in Ukraine, including damaged houses in a village near Kyiv and burning houses in the besieged city of Mariupol.

March 16: President of Ukraine Volodymyr Zelensky stated that he does not expect his country to join NATO. That was one of the grievances Putin cited in an attempt to justify invading him.

March 17: Casualties were recorded after debris from a downed missile hit a residential building in Kyiv.

March 18: Russia fired six missiles at Lviv, according to the Ukrainian military. The city is close to the Polish border and has been relatively unaffected by Russian attacks.

March 19: Ukrainian President Volodymyr Zelensky called for peace negotiations “without delay” and warned that Russia’s losses would be “enormous” without them.

March 21: After days of fighting, Ukrainian forces regained control of Makarov, a town 30 miles west of Kyiv, the Ukrainian Armed Forces said in a Facebook post on Tuesday.

March 22: Mariupol has been “burned to the ground,” according to Zelensky, as new footage shows Russian forces entrenched in the southern port city.

March 23: Ukrainian forces say a counterattack north and west of Kyiv appears to have made some progress and that they have regained control of Makarov, a town west of the capital.

March 24: The Ukrainian Navy says it destroyed a Russian ship in the occupied port of Berdyansk on the Sea of ​​Azov, 70 kilometers southwest of the southern city of Mariupol.

March 25: The US and EU announced a joint working group in an effort to rid Europe of its dependence on Russian oil and gas.

March 27: Ukraine recaptured several towns from Russian forces in a series of counterattacks, including east of Kharkiv and northwest of Mariupol, after Russian missiles hit the western city of Lviv.

March 28: Ukrainian President Volodymyr Zelensky said that he is willing to accept a neutral status as part of a peace deal with Russia, but that any deal would have to be presented to the Ukrainian people in a referendum.

March 29: Russian forces have largely stalled in various parts of Ukraine, including around Kyiv, according to a senior US defence official.

March 30: US officials are sceptical of Russia’s claims of possible de-escalation and the Pentagon warns that the troop movement near Kyiv is “a repositioning”.

March 31: The mayor of Chernihiv said the city was the target of a “colossal attack” despite Russian claims.

April 1: Russian Foreign Minister Sergei Lavrov travelled to India to discuss the situation in Ukraine there.

April 2: Ukraine’s president says Russian troops are “slowly but noticeably” moving away from the north of the country, adding that preparations are underway for more possible Russian attacks in eastern Donbas and Kharkiv.

April 3: In Bucha, northwest of the capital, images show bodies of civilians strewn across a street.

April 4: Ukrainian President Volodymyr Zelensky stated that the number of civilian casualties could be much higher in other cities liberated from Russian control as happened in Bucha.

April 5: Before the UN Security Council, Volodymyr Zelensky claimed that the Russians killed civilians in Bucha for “pleasure”.

April 6: Despite Moscow shifting its military focus to the east of the country, the NATO chief said the war could last for years as Russia still wants “all of Ukraine”.

April 7: Dozens of people were killed and injured in a Russian missile attack on a train station used as an evacuation center in the eastern city of Kramatorsk, according to Ukrainian officials.

April 8: Ukrainian President Volodymyr Zelensky said a Russian missile attack on a train station that killed at least 50 people in the eastern city of Kramatorsk was “another Russian war crime, for which all those involved will be held accountable.”

April 9: The military governor of eastern Ukraine’s Luhansk region said evacuation corridors for civilians were being “tightened” following a Russian missile attack on the Kramatorsk train station on Friday.

April 10: President Volodymyr Zelensky declared that Ukraine is “prepared” for a major Russian offensive in the east of the country.

April 11: Ukraine’s president said Russian troops withdrawing from the north left behind thousands of mines in a deliberate act he deemed a war crime.

April 13: The United States and the European Union pledged an additional $1.3 billion in combined military aid to Ukraine.

April 15: Two Ukrainian missiles hit the Moskva, one of Russia’s most important warships, sinking it in the Black Sea, a senior US defence official said.

April 16: Kyiv Mayor Vitali Klitschko urged residents who have evacuated the capital to refrain from returning after the city “was attacked” on Saturday morning.

April 17:– Officials at the port of Mariupol, in the country’s southeast, reject a Russian ultimatum demanding the surrender of Ukrainian forces in the city, the scene of a sustained and brutal siege. Russia responded by saying that it would “eliminate all resistance”.

April 19: Russia’s war in Ukraine has been concentrated in the Donbas region, an industrial zone in eastern Ukraine. President Vladimir Putin seems determined to occupy the region.

April 21: The attempted evacuation of the Luhansk region is interrupted by a Russian bombardment, according to a military official.

April 22: Ukrainian authorities say they have identified new mass graves on the outskirts of the besieged city of Mariupol. New satellite images support their claims.

April 26: The EU accused Russia of trying to “blackmail” the bloc with gas after Moscow cut supplies to Poland and Bulgaria after refusing to pay in rubles.

April 27: Russian President Vladimir Putin warned that any country that interferes in Ukraine will receive a “lightning-quick” response from Moscow.

April 28: US President Joe Biden expressed shock at the news that an American, Willy Joseph Cancel, was killed while fighting alongside Ukrainian forces.

April 29: Russia rejects all proposals to evacuate the besieged port city of Mariupol, where some 100,000 civilians are said to be trapped, according to a Ukrainian official.

April 30: Ukraine’s first lady Olena Zelenska told the Polish newspaper Rzeczpospolita that the war “has completely changed everything, including our lives”, and believes, based on the atrocities she has seen, that Russia’s true purpose is to destroy your country.