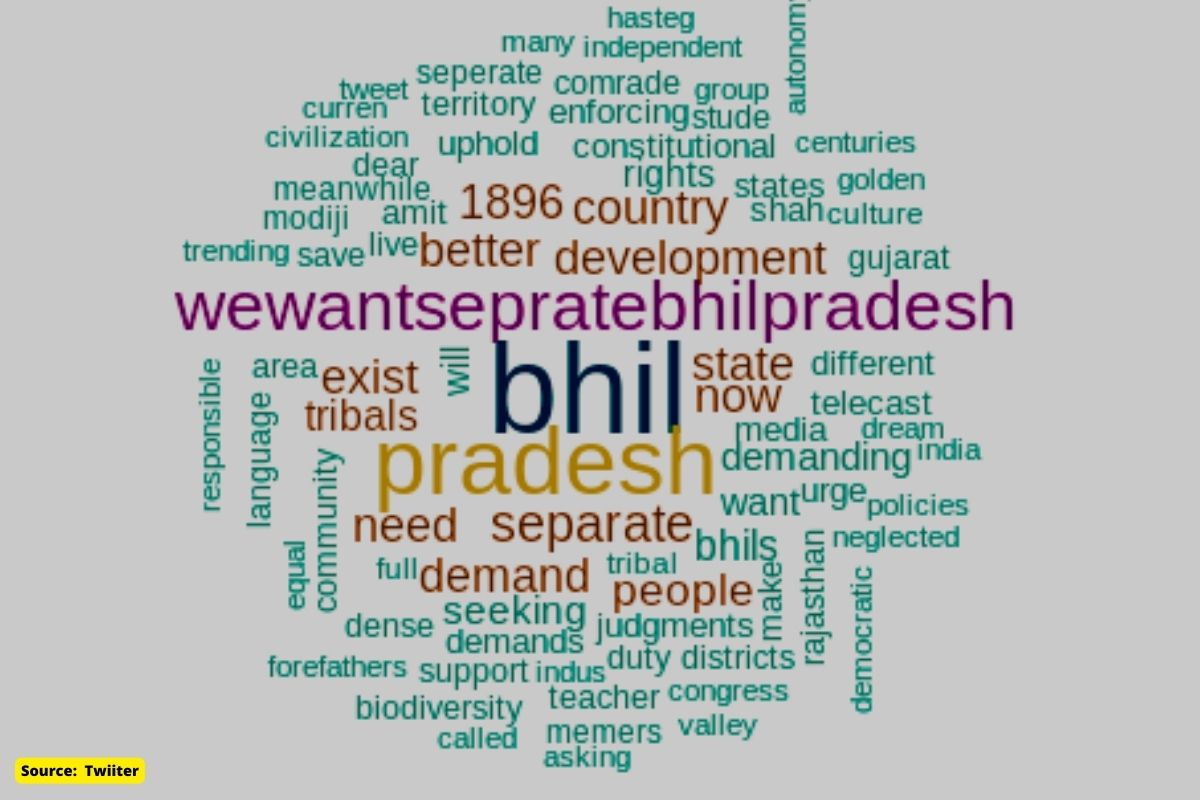 A rising trend on social media shows users asking for a separate state called Bhil Pradesh. The Bhil is the name of a tribe in central India which extends mainly to Rajasthan, Gujarat, Madhya Pradesh, Chhattisgarh, Maharashtra and Tripura. So, this Bhil tribe is the most widespread tribe in India.

The tribal outfits and their political wing in Rajasthan demand for them a separate state, Bhil Pradesh, which includes the tribal areas of not only Rajasthan but also MP, Gujarat and Maharashtra.

Bhils are a group of tribal Indians scattered throughout India from Gujarat in the west to Tripura in the far east. As of 2013, they were the largest tribal group in India with over 16,673,000 inhabitants (Joshua Project Data) with the majority living in the states of Gujarat, Madhya Pradesh, Rajasthan and Chhattisgarh. The tribe is further divided into several subdivisions.

What is word Bhil

The word Bhil is derived from “Veel”, which means “bow” in the Dravidian language. The Bhil tribe is called “Dhanush Purush of India” because they are highly adept at learning Dhanush. Tribe Sub-categories 1. Ujaliya/Kshatriya Bhil:- Ugaliya Bhil is basically the Kshatriya who wandered into the forests at the time of the Mughal invasion. 2. Langot Bhil: – They are the original Bhils who live in the forests, their custom is still ancient. These mainly live in Madhya Pradesh.

In Rajasthan, Rana Poonja Bhil ji is remembered, who along with Maharana Pratap, defeated the Mughals. The portrait of Bhil, this warrior, is inscribed on the royal insignia of Mewar and Mayo College. As of 2013, the Bhil community was the largest tribal community in India with a total population of 1.7 crores.

What is Bhil Pradesh?

These Bhil people want migrants from this community to be returned to their place of origin with full dignity. These people also demand that tribal communities take priority over natural resources. To safeguard the rights of the tribes over their own land, the people of the community demand the “re-acquisition” of the land from which they were forced to emigrate. The demand for a separate state comes from the tribal belts of Rajasthan, Madhya Pradesh and Gujarat. Reiterating the constant neglect of the government, the Bhils’ demand for a Pradesh unites them to reserve special rights under the scheduled tribe privileges.

These districts are Dungarpur, Banswara, Pratapgarh in South Rajasthan, Ratlam, Jhabua, Alirajpur, Dhar, Petlawad etc. of Madhya Pradesh, while the eastern districts of Gujarat include Panchmahal Godhra, Dahod and Dang, while the northern districts of Maharashtra include Nashik, and Dhulé.

Tribes, whose basic livelihood has historically been derived from natural resources, are trying to adapt to new modes of economic sustainability.

Important people of the Bhil community are as follows;

These Bhil people also formed the ‘Tribal Party of India’ in 2017 to put their demands firmly before the state governments. This party also won two seats each in the Legislative Assembly of Gujarat and Rajasthan. Their leader is Chhotubhai Vasava from Gujarat.

As its indigenous slogan “Jai Bhil Pradesh” gained momentum, the newly formed party won two seats in the 2017 Gujarat Legislative Assembly elections. Since then, the party has battled domestic political oppositions such as the BJP and Congress. , while also reinstating its Bhil Pradesh claim.

Also Read:  Will ambulance be accessible to tribal women like Gangi, in Draupadi Murmu’s Presidency?

Bhils have a rich and unique culture. The Bhilala subdivision is known for its Pithora painting. Ghoomar is a traditional folk dance of the Bhil tribe. Ghoomar is the symbol of femininity. The young women take art in this dance and declare that they are stepping into women’s shoes.

The Bhil tribes are popularly known as medicine, food and fodder, wood and non-wood products, cosmetics and other household items.

Bhils or Bheels are a group of tribal Indians scattered throughout India from Gujarat in the west to Tripura in the far east. As of 2013, they were the largest tribal group in India with over 16,673,000 inhabitants (Joshua Project Data) with the majority living in the states of Gujarat, Madhya Pradesh, Rajasthan and Chhattisgarh. The tribe is further divided into several subdivisions.