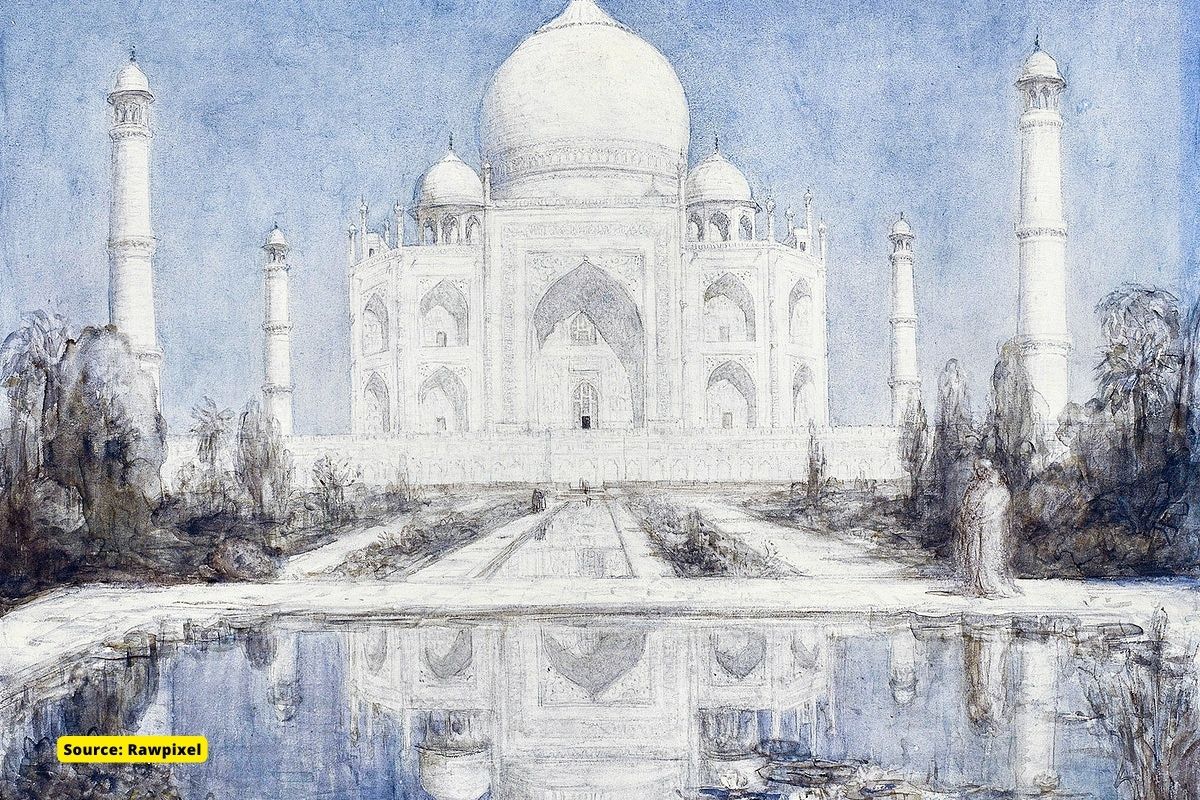 Ram Mandir is now constructing on the site of Babri Masjid after the order of the court. There are many claims on the monuments and mosques built by Muslim rulers, according to which there once exist a Hindu temple or building. In this, the dispute of Qutub Minar, Gyanvapi of Mathura and Taj Mahal is the most discussed.

Many people believe about the Taj Mahal that there used to be a Shiva temple here, its real name was Tejo Mahalaya. The matter is also going on in the Lucknow Bench of the Allahabad High Court. Diyakumari, a member of the royal family and MP from Jaipur, has done the work of increasing this controversy.

They claim that the property where the Taj Mahal built belonged to the Jaipur royal family. This property remained a part of Jaipur till the time of the then Raja Jai ​​Singh. In the same period, the Mughals had acquired this property under pressure.’

The controversy over the secret rooms of the Taj Mahal began after the release of PN Oak’s book “The Taj Mahal: The True Story” in 1989. The author claims that the original monument built in 1155 – decades before the Muslim invasion of India.

Petitioner Rajneesh Singh claims and some historians say that the monument was an ancient Shiva temple, which was demolished by Mughal Emperor Shah Jahan and converted into a mausoleum.

The land on which the Taj Mahal exists belonged to Raja Man Singh, Akbar’s famous general. When Mumtaz died, Raja Jai Singh, his grandson, owned it. Mughal administration were bureaucratic, thousands of documents generated and preserved. Although many disappeared over the years, some still remain.

PN Oak discovered that the palace of the Shiva temple had been usurped by Shah Jahan from the Maharaja of Jaipur, Jai Singh. Shah Jahan then rebuilt the palace into a monument to his wife.

In his court proceedings, Badshahnama, Shah Jahan admits that an exceptionally beautiful palace in Agra moved from Jai Singh for an excellent burial. The former Maharaja of Jaipur is said to keep in his secret collection two orders from Shah Jahan for the delivery of the Taj Building.

The use of captured temples and palaces as burials for deceased courtiers and royalty was a common practice among Muslim rulers. For example, Hamayun, Akbar, Etmud-ud-Daula and Safdarjung were all buried in such palaces.

Oak’s inquiries begin with the name of the Taj Mahal. He says that this term does not appear in any Mughal court papers or records, even after the time of Shah Jahan. The term “mahal” never used for a building in any of the Muslim countries, from Afghanistan to Algeria.

As per a BBC report, Writer Sacchidananda Shevde, who worked closely with Oak, said that the government should appoint a team of experts to “find out the truth”. “Taj Mahal is not a piece of Muslim architecture. It is original Hindu architecture,” he said.

But the government’s official Taj Mahal website says the monument represents “a style that combines elements of Persian, Indian and Islamic architectural styles.”

In December 1631, with the dispute against Khan Jahan Lodi won, Shah Jahan ordered that Mumtaz Mahal’s body be disinterred and carried 435 miles or 700 kilometers to Agra. His return was a grand procession with thousands of soldiers accompanying his body and mourners along the route.

When the remains of Mumtaz Mahal arrived in Agra on January 8, 1632, they were temporarily buried on land donated by the nobleman Raja Jai ​​Singh. This was close to where the Taj Mahal would be built.

The Construction Of The Taj Mahal

Shah Jahan decided to call on nine architects to build what would be for him the closest representation of paradise on Earth. Not satisfied with the architects of his country, he will go as far as Persia to find the one who, in his eyes, was the best architect in the world.

Started in 1632, it took no less than 22 years to build the main building and a few more years for the gardens and the inner courtyard. The construction is still considered an architectural masterpiece today.

Symmetry is not respected is inside the mausoleum

Indeed, despite the few technological means available at the time of construction, it fulfils all the conditions of solidity and resistance against earthquakes. Agra sits on a fault line that can potentially cause earthquakes.

The architect, therefore, took these data into account for the construction of the Taj Mahal. This is why, looking at the mausoleum from the front, it is easy to see that the four minarets surrounding the Taj Mahal are not straight. They are in fact slightly inclined outwards, which will prevent them from falling on the main building in the event of an earthquake.

The only place where the symmetry is not respected is inside the mausoleum. The Taj Mahal was built to accommodate only a coffin. Shortly before his death, Shah Jahan requested that his first daughter be buried alongside his true love.

Shah Jahan poured his emotion into designing an elaborate and expensive mausoleum that would put all who had come before him to shame. It was also unique in that it was the first major mausoleum dedicated to a woman.

Although no primary architect of the Taj Mahal is known, it is believed that Shah Jahan, who was passionate about architecture, worked on the plans directly with the input and help of several of the best architects of his time. The intention was that the Taj Mahal, “the crown of the region”, would represent Heaven, Jannat, on Earth. Shah Jahan spared no expense to make this happen.

Taj Mahal’s majestic edifice of white marble encrusted with precious stones was built – and completed in 1643 – by order of the Muslim Mughal Emperor Shah Jahan to serve as the final resting place of his beloved wife, Mumtaz. The mausoleum, surmounted by its famous dome, located on the banks of the sacred Yamuna river, in the city of Agra, was declared a World Heritage Site in 1983 and selected as one of the “seven wonders of the modern world” in 2007.

Nearly eight million people, including one in ten foreign tourists visiting the country, come to admire it every year, making it one of the most visited Indian sites. But the new regional government wants to reorient the tourist ideology to favour the Hindu heritage: in its recent brochure on the priorities of the sector, the regional ministry of tourism has withdrawn the Taj Mahal and replaced it with various Hindu and Buddhist places of pilgrimage.

In the city of Agra, this controversy tears the hearts of the inhabitants, attached to their architectural masterpiece. “I see the Taj Mahal every day when I go for a walk and I was able to establish communication with this building, says Kaushal Sharma, a Hindu trader in the old city. It was built out of love, and all religions speak of love.

The heritage of the Mughals is not limited to their architectural works. In a small workshop located a few hundred meters from the Taj Mahal, Mohammed Khan patiently chisels the white marble to prepare a 2.5 mm deep niche where the lapis lazuli and other semi-precious stones will be glued to adorn a table carved in this white stone. This technique, called incrustation, was imported from Florence, via Persia, at the time of Shah Jahan. It was also used to decorate the Taj Mahal with a crown of jewels. Agra is now one of the last places in the world where this craft is still passed down from father to son.

“As there was a tract of land (zamini) of great eminence and pleasantness towards the south of that large city, on which there was before this the mansion (manzil) of Raja Man Singh, and which now belonged to his grandson Raja Jai Singh, it was selected for the burial place (madfan) of that tenant of Paradise. Even thought Raja Jai Singh considered the acquisition (husul) of this to be his good fortune and a great success, by way of utmost care, which is absolutely necessary in all important things, particularly in religious matters, a lofty mansion from the crown estates (khalisa-sharifa) was granted to him in exchange (‘iwad).

“Be it known through this glorious farman marked by happiness, which has received the honor of issuance and the dignity of proclamation, that the mansions (haveli) detailed in the endorsement (dimn), together with their dependencies, which belong to the august crown property, have been offered to that pride of peers and vassal of the monarch of Islam, Raja Jai Singh, and are hereby handed over and transferred to his ownership–in exchange for the mansion (haveli), formerly belonging to Raja Man Singh, which that pride of the grandees willingly and voluntarily donated for the mausoleum (maqbara) of that Queen of the ladies of the world and Lady of the ladies of the Age, that honor of the daughters of Adam and Eve and upholder of the stature of chastity of the Time, that Rabi’a of the world and chastity of the World and Religion, that recipient of Divine Mercy and Pardon, Mumtaz Mahal Begam.

There is no convincing official evidence (so far) to support the claim that the Taj Mahal is a temple. According to the official recorded history of India, the Mughal ruler Shah Jahan built the monument in memory of his queen, Mumtaz Mahal.