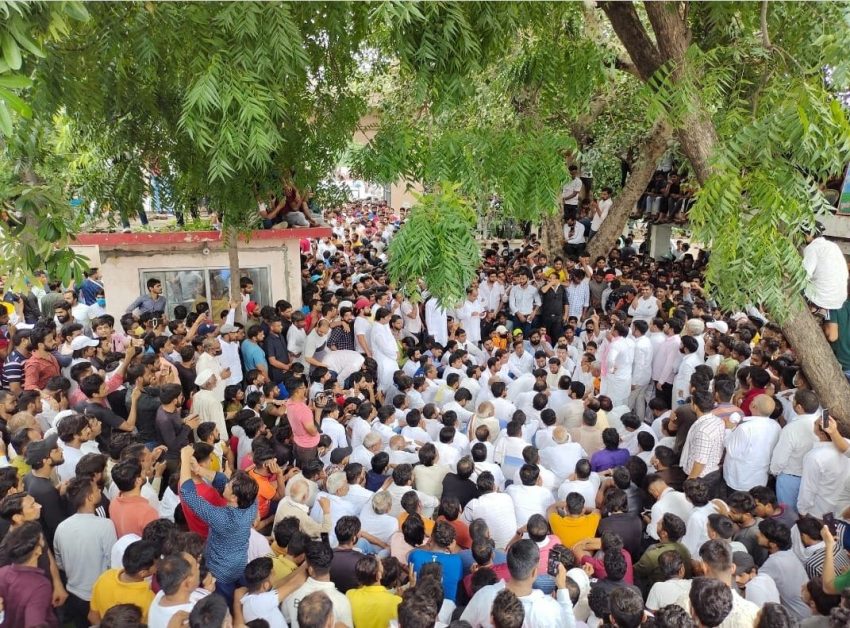 Ground Report | New Delhi: Why Gurjar protesting against Jewar Airport; Members of the Gujjar community from different villages are demanding to name Jewar Airport as Mihir Bhoj International Airport and And a huge statue of Raja Umrao Singh, the former king of Dadri province, should be installed there.

On the other hand, the Yogi government is being opposed to Twitter. Go Back Yogi (#GoBackYogi) is trending on Twitter. More than 35 thousand people have tweeted on this.

Why Gurjar protesting against Jewar Airport?

All India Gurjar Parishad national vice-president and event convener Ravindra Bhati said members of the Gurjar community are “unhappy” with the turn of events.

After the meeting, the committee issued a 10-point resolution, which included their demand that the Jewar airport be named after Raja Mihir Bhoj and a colossal statue of Raja Umrao Singh, the former Raja of Dadri province, be installed there.

ALSO READ: Who was emperor Mihir Bhoj, controversy over his statue

The Akhil Bharatiya Gurjar Parishad Sangathan had publicly demanded an apology from CM Yogi for this and announced that if this did not happen, then black flags were shown to PM Modi and CM Yogi during the foundation stone laying and public meeting of Jewar International Airport.

According to officials, the Gurjar and Rajput communities are at loggerheads over the issue of which caste Mihir Bhoj belonged. Both the major communities claim the king as their own.

Tension prevailed in the area even before the unveiling of the statue of Raja Mihir Bhoj in Noida last week. There was a dispute about putting ‘Gurjar’ in front of the king’s name on the throne.

Who was emperor Mihir Bhoj

According to Rajendra Panwar, principal of Mihir Bhoj PG College, King Mihira Bhoja ruled between 836-885 CE with Kanauj (in present-day UP), known as Panchala, serving as his capital.

Early in his reign, Bhoja reversed the defeats suffered by his father Rambhadra. He successfully conquered Malwa, Deccan, and Gujarat, and gradually rebuilt the empire with conquests over the regions of Rajputana and Madhya Pradesh. Former Delhi chief minister, (late) Sahib Singh Verma named NH-24 after Mihira Bhoj during his tenure”.

ALSO READ: What is AUKUS, Why US don’t want India to be part of this?

Mihir Bhoj is considered to be the greatest king of the Pratihara dynasty. He ruled for about 50 years. His empire was vast and under which he used to come in the states of modern India, Madhya Pradesh, Uttar Pradesh, Punjab, Haryana, Orissa, Gujarat, Himachal etc.

Mihir Bhoja was a devotee of Lord Vishnu and was also considered Adivara in some coins. A place named Mehroli was named after him. Parts of National Highway 24 are known as Gurjara Samrat Mihirbhos Marg.

Emperor Mihir Bhoj ruled for 49 years from 836 to 885 AD. Mihir Bhoj’s empire extended from Multan to West Bengal and from Kashmir to Karnataka. These religions were the ultimate devotees of the demon emperor Shiva.

A user named Piyush Gurjar wrote, ‘We strongly demand to rename Jewar Airport as Gurjar Samrat Mihir Bhoj International Airport. If it doesn’t happen then #GoBackYogi. We Gurjars will not tolerate any kind of mischievous activity with our history.

Another user wrote “There was a time when Gurjar’s were fighting with Arab and British Invaders , but now the time has changed and we are fighting for the sammaan of our great ancestors , it’s so disheartening for me to see my people fighting for their existence .”