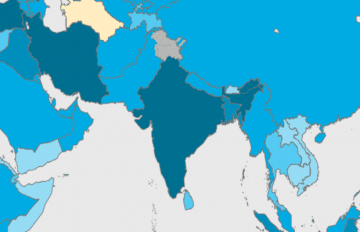 The World Health Organization (WHO) has shown Ladakh different from India in one of its maps along with Jammu and Kashmir. This color coded map is available on the official website of WHO. The Indian part is depicted in blue color, while Jammu and Kashmir and Ladakh are marked with gray color. There has been a lot of resentment among Indian expatriates in Britain about this map of the global institution.

The English newspaper ‘Times of India’ reported that two new union territories of the country have been shown in gray, while India is seen in a different blue color. At the same time, the disputed part of Aksai Chin is shown in gray color, with blue stripes / stripes on it.

The map is available in the WHO’s ‘Covid-19 Scenario Dashboard’, which tells the country how many confirmed cases of the global epidemic corona virus and how many deaths it has caused. However, regarding the controversy over the map, the WHO has made it clear that it follows the guidelines of the United Nation and accordingly reads, understands and views the maps.

IT consultant Pankaj, who lives in London, was the first to see this map. According to him, it was shared on a WhatsApp group. He told the newspaper, “I was surprised to see Jammu and Kashmir and Ladakh with another color. China can get behind all this, because it gives thick funding to the WHO.”

Pankaj said, “I was shocked that even a big institute can do this. I know that China gives a big fund to WHO and Pakistan gets loan from China. I think China is behind this because China has a lot of influence on WHO. “Nandini Singh, social media head of the expatriate group Reach India (UK), was also angry at the WHO.

He told the newspaper – instead of thanking what India has done for Corona (supplying PPE kits worldwide and potential vaccines), it is trying to harm India. WHO should apologize for this and correct the mistake.