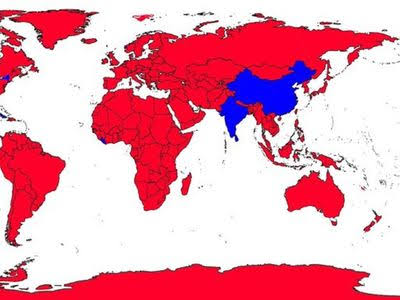 In this, Donald Trump Jr. called Jammu and Kashmir a part of Pakistan. Not only that, he has also called India a country with Joe Biden’s influence.

Donald Trump Jr. tweeted the world map on the day of presidential election voting in the US. It features Trump-supported countries in red. While in blue the countries that support Biden are told.

Except the four countries of the world, he has described the whole world as supporting country. Countries that Trump Jr. has proclaimed as Biden include India, China, Mexico and Laberia.

Tharoor tweeted, “The price of Namo’s bromance: Kashmir & the NorthEast cut off from the rest of India, &the whole “filthy” place relegated by Don Jr to the realm of hostiles, along with China&Mexico. So much for the crores spent on obsequious serenading stadium events!”

“So much for the friendship with Trump Senior. Junior has placed India firmly with Joe Biden and Kamala Harris though interestingly Jr. believes J&K & the NorthEast go against the rest of India and will vote Trump. Someone needs to take his colouring pencils away,” J&K former chief minister, National Conference leader Omar Abdullah tweeted.

It is learned that a survey report may be the reason behind Trump-son showing India in blue. The report said 72 percent of Indian-Americans would vote for Joe Biden.

Kamala Harris, Biden’s deputy, is also of Indian descent. This is why Trump Jr. portrayed India as a hostile country during the election, as many political and diplomatic analysts claim. Interestingly, anti-US countries like Iran, Russia, North Korea and the whole of Antarctica are also shown in red on the map.