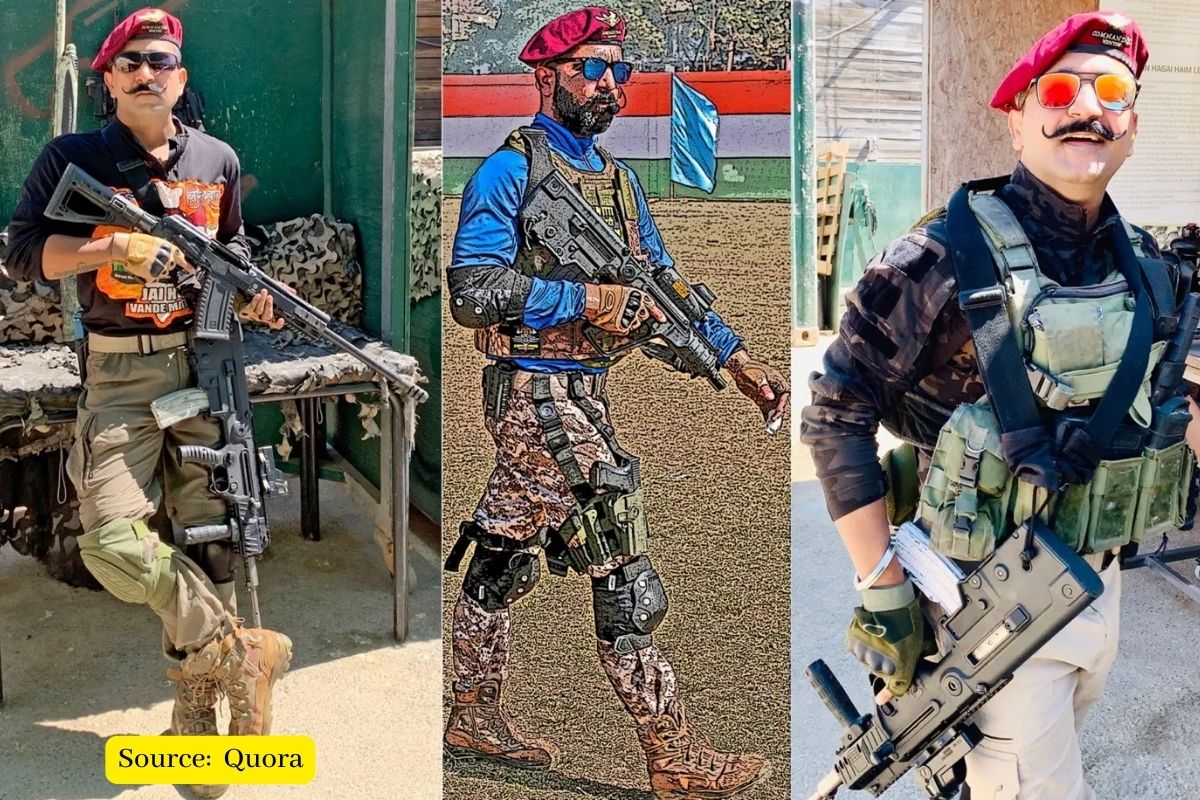 Grandmaster Shifuji Shaurya Bhardwaj has always been in the news mainly for his bold apolitical comments on nationalists. He is known for spreading staunch patriotism through his videos and massive public speeches.

He is regularly accused of wearing a military outfit with a maroon beret, Marcos insignia, and balidan insignia. His credentials as an independent trainer and mentor of independent commandos in special forces and the military have often been questioned.

There is no unique online and offline evidence to establish the false accusation that he is an army imposter. However, he has always stated that he has provided the tutoring services of his MITTI System to the Elite Special Forces, Indian Armed Forces, Paramilitary Forces, State Police and Enforcement Agencies.

Who is Shifuji Shaurya Bhardwaj?

Grandmaster Shifuji Shaurya Bharadwaj is a commando trainer, action designer, action choreographer, motivational speaker and actor. He is the founder and CEO of SASS9 and the founding trustee of Mission Prahar. Mission Prahar was founded by Bharadwaj in the year 1999 with a vision to educate and train in the areas of self-discipline, self-awareness and self-advocacy.

On his website, he claims to be a special forces trainer, like MARCOS from the Navy. Shifuji’s video went viral, surpassing seven million views in one day. Grandmaster Shifuji is a true patriot and is deeply respected by his peers. He has earned the respect of the country with his contributions and hard work aimed at improving the people. He can be seen wearing a maroon beret and uniform, giving him the look of a true soldier. Unfortunately, however, this has been used against him by certain groups who wanted to discredit his hard work.

“Master Shifuji was accused of allegedly misusing the insignia of the Indian Army. Despite his relentless service to the good of the town, he was interrogated and came clean of his accusations. His innocence and good intentions came to light when he was given a clean notice by the concerned authorities, as the insignia Masterji wore on his beret was his own trademark logo and not one of the Indian Army. Despite these controversies surrounding him, Grandmaster Shifuji Shaurya Bharadwaj has continued to fulfil his duty to his nation”.

However, he has also staked himself on being many other things such as “Special Mentor for Mumbai QRT Commandos”, “Special Urban Counter Terrorism Tactics Instructor for Mumbai Police” and “Special Forces Special Commandos VIP Protection Skills”. That’s like ninja-level experience, although most of us would never have heard of such positions.

In fact, according to the Pune Mirror, Shifuji spent 29 years in the military, training Hawk Commandos, Special Armed Forces, Counter Terrorist Group, Special Task Force and Anti Terrorist Squad, and has been teaching self-defence to women for the past 15 years.

Back in 2018, The president of the Uttar Pradesh ex-servicemen’s federation, Major Ashish Chaturvedi, filed a complaint against Shifuji for posting pictures and videos in army uniform and special forces uniform and for claiming to be an army officer.

In 2017, The Indian Navy has confirmed that Shifuji Shaurya Bharadwaj is not a Marine Commando of the Indian Navy. Also, no person by this name has been involved in the training of Shipping Companies, and the Navy has responded to a request made under the Right to Information Act.

Many have mistaken him for an Indian Army officer based on his claims in many of his videos, Instagram posts, blogs, interviews, and Facebook page. In fact, he even claims to be the next Bhagat Singh. In most of his videos of him on Youtube (many deleted now) and on his official channel, he claims to be “Trainer of Special Commandos for Combatants of the Army Combat Regiment” Factchecker website Alt news reported.

In an expose by The Lallantop,  varying degrees of this fraudulent soldier’s claims were laid out and torn apart, after which the “Grandmaster” temporarily shut down his website and removed several videos from his YouTube channel.

Major Ashish Chaturvedi, president of the Uttar Pradesh ex-servicemen’s federation, filed a complaint against Shifuji for posting pictures and videos wearing Army and special forces uniforms and claiming to be an Army officer.

Shifuji’s answer to those claims

Grandmaster Shifuji claimed that he has never stated that he is an officer in the military, nor has he ever claimed to have been recruited or held any position in the military. There is no unique online and offline evidence to establish this false accusation to prove that it is false and fraudulent.

Master Shifuji dresses like any other private tactical combat professional serving vicariously with the military, maintaining discipline and extreme physical toughness as part of his profession as an independent commando mentor.

The beret and the shield are synonymous with ranks and recognition of exemplary service to the Fatherland. Also, as per Indian law, no law prohibits a mentor, or coach while conducting a training session from wearing fancy camouflage pants and berets of any colour.

He has provided his completely “free” mentoring services, trained many specialized military units in his long career as a freelance commando mentor, freelance commando trainer, and is instrumental in developing customized strategic close combat training programs and based on requirements for both the military and forces at the state level.

Grandmaster Shifuji wears his trademark emblems on his maroon beret registered a decade ago under the trademark law of 1999. He also has a copyrighted style of clothing.

As a patriot, Grandmaster Shifuji considers himself Ek Samanya Bharatiya, a normal Indian citizen. As an independent commando mentor, he is an expert in custom counter-terrorism, counter-insurgency, modern and traditional tactical warfare art forms, and the ‘akhada’ and ‘desi’ systems.

He is a Kallaripayattu Guruswamy, one of the best Verm and Marma Kalari Expert Gurus, and a Bollywood Action Designer and Action Consultant.

Grandmaster Shifuji is well known for being the mentor, life coach, and teacher of Tiger Shroff, Ahan Shetty, and Subhan Khan Nadiadwala.

As an action consultant and action designer, he has worked with Warda Khan, S. Nadiadwala and various Israeli filmmakers. He has also worked with prominent Bollywood celebrities like Ajay Devgn, John Abraham, Shraddha Kapoor, Javed Jaffrey and Nora Fatehi among others.

There is no unique online and offline evidence to establish the false accusation that he is an army imposter. However, he has always stated that he has provided the tutoring services of his MITTI System to the Elite Special Forces, Indian Armed Forces, Paramilitary Forces, State Police and Enforcement Agencies.

He has provided his mentoring services completely “at no cost,” trained many specialized military units in his long career as an independent commando mentor, independent commando trainer, and is instrumental in developing customized strategic training programs based on requirements and armed combat melee for both the Armed Forces and state forces.