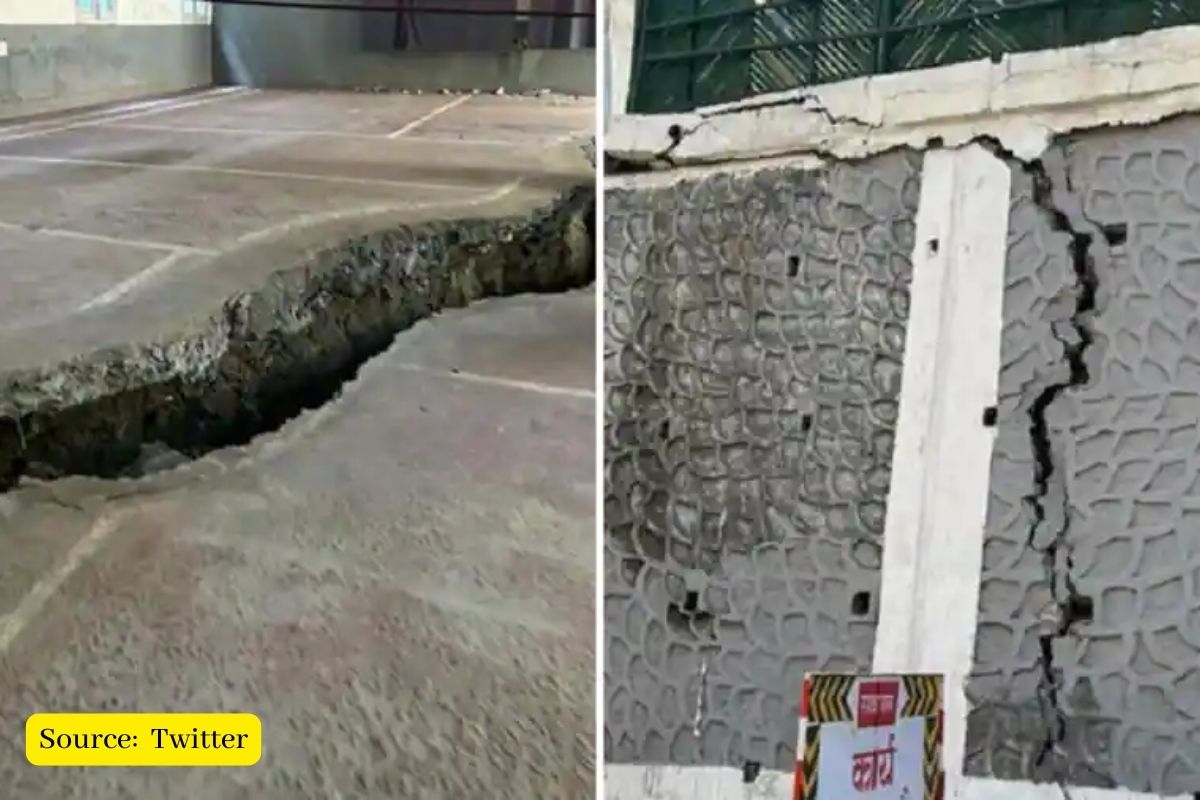 A number of areas in the Joshimath town of Chamoli district of Uttarakhand are sinking day by day due to both natural calamities and human-induced causes. Uttarakhand Chief Minister Pushkar Singh Dhami ordered the evacuation of 600 families in the town of Joshimath, where many houses have developed huge cracks, raising concerns about their stability.

Houses have developed cracks, due to land subsidence, or subsidence of the earth’s surface due to geological or human-induced causes. Construction work in Joshimath has also been stopped until further orders.

Construction of projects including the widening of the all-weather Char Dham road between Helang and Marwari and work on the 520 MW Tapovan-Vishnugad hydroelectric project of the National Thermal Power Corporation (NTPC) have been halted immediately stopped “until further orders”.

Houses and roads in Joshimath have developed deep cracks. On Monday at midnight, residents panicked when they heard a creak under the floor. Now, the situation has forced an exodus of residents.

An official said that although the land has been “sinking” for the past year due to land subsidence, the problem has intensified in the past two weeks. Piyoosh Rautela, executive director of the Uttarakhand government’s Center for Disaster Mitigation and Management said that the land subsidence (known as “subsidence”) is likely the remnant of a broken aquifer, an underground layer of rock that retains water

Joshimath is a popular hill station in Uttarakhand on the Rishikesh-Badrinath National Highway (NH-7) and is also a major pilgrimage destination. Joshimath is located at an elevation of 6150 feet in the Chamoli district. It is a gateway to important Hindu pilgrimage sites like Badrinath (one of the four char dhams) and Hemkund Sahib.

Joshimath is also strategically important to the Indian Army as it is home to one of the most important cantonments of the army.

Evacuation of the people

“The three main factors are Joshimath’s vulnerable foundations, as it was developed on the rubble of an earthquake-triggered landslide more than a century ago, its location in seismic zone V, which is more prone to earthquakes, plus gradual weathering and water seepage that reduce the cohesive strength of rocks over time,” director of the Wadia Institute of Himalayan Geology Kalachand Sain told PTI.

After the evacuation of the people in the affected areas to a safe place, the microzoning of the town should be undertaken, the replanning of its drainage system and rainwater outlets, in addition to the evaluation of the resistance of the rocks, among others, Sain suggested.

“There has been a lot of activity below the surface here,” the geologist said of the town located at an altitude of nearly 6,000 feet in the Chamoli district. “A large amount of strain energy has accumulated over the years, which is released in the form of earthquakes and often triggers landslides. In addition, there is an increase in pressure on the surface due to human activities.”

Researchers from the Dehradun-based Wadia Institute of Himalayan Geology conducted a survey in 2022 and found that these gneissic rocks are highly weathered, have low cohesive value, and are prone to high pore pressure when saturated with water, especially during monsoons.

In essence, the ground and dirt below Joshimath have a low ability to hold together, especially when overloaded by additional construction.

Nearly 50 families have been moved to safer locations. Apart from them, 60 families living in a colony intended for the employees of Vishnu Prayag Jal Vidyut Pariyojana have been moved elsewhere, its director Pankaj Chauhan said.

According to the 2011 census, the population of the Joshimath municipal area was nearly 17,000, including about 4,000 families. The expert panel found that several pockets of the city of Joshimath are sinking due to rapid soil erosion, seismic causes and landslides.

A panel of experts set up by the Uttarakhand government has reportedly found that several pockets of Joshimath are “subsiding” due to natural and machine-made factors.

Times of India reported on a 1976 Mishra committee report accessed by the newspaper which predicted the future possibility of Joshimath sinking due to urbanization. No government took the Mishra committee report seriously and residents who then rejected the report now regret that they did not pay attention to the committee’s conclusions. They also blame successive governments for not taking the threat seriously.

The 1976 panel made up of members of the Army, ITBP, BRO, the Kedarnath-Badrinath Temple committee and the local administration had warned that the depletion of natural forest cover and stone blasting near the area would upset the fragile balance of Joshimath which arose at an old landslide site.

Veterans say heavy rains and flooding from the Raini area of the Alaknanda River began to erode Joshimath’s soil. The 1970s panel was formed to find the cause of frequent landslides and short- and long-term solutions.