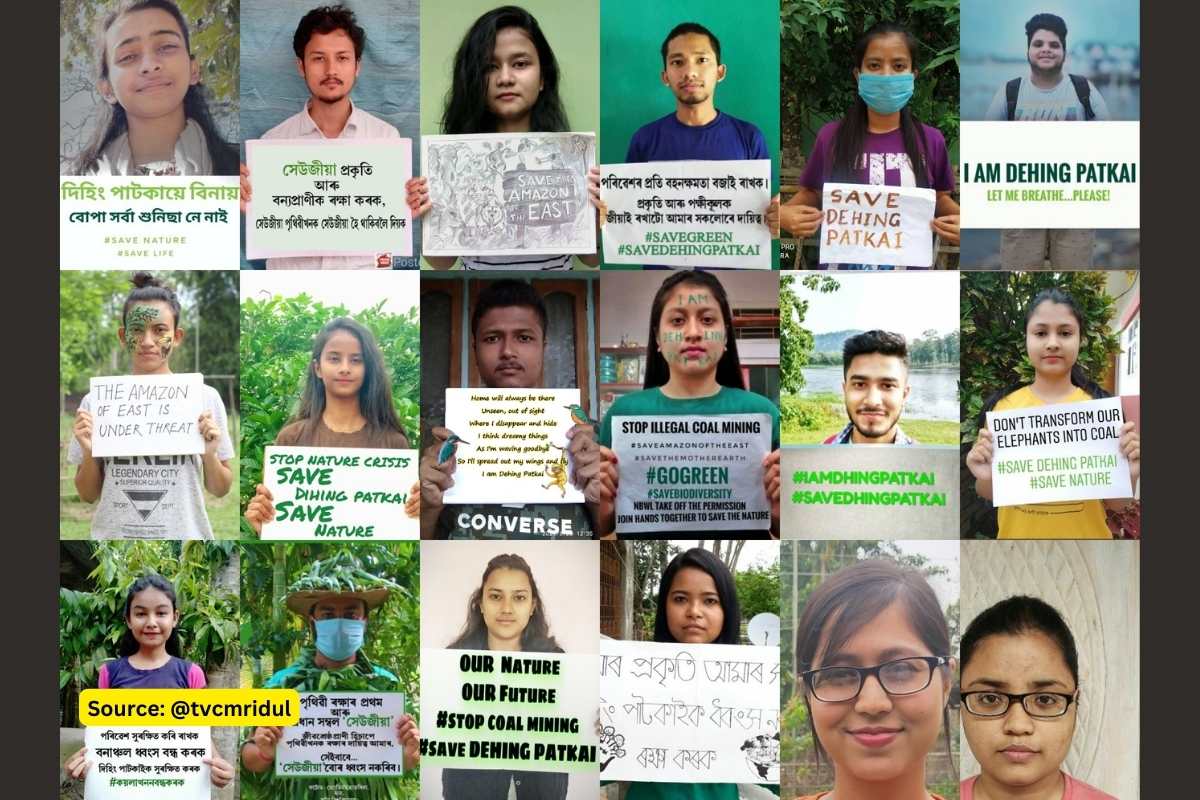 For years Dehing Patkai has been affected by both legal and illegal coal mining. Coal mining in the vicinity has not only had a severe impact on the rich biodiversity but the tribal communities have also suffered due to repeated displacement and pollution.

In April 2020, the National Board for Wildlife (NBWL) gave its approval to mine for coals in the North Eastern Coalfields in the Saleki Proposed Reserve Forest (PRF). The PRF is a part of the Dehing Patkai.

The NBWL is chaired by the Prime Minister and aims to promote forest and wildlife conservation.

An RTI filed by an activist revealed that North Eastern Coalfields had been illegally mining in Dehing Patkai since 2003. To make things worse, 39% of the areas had been mined before the approval.

Read more: All You Need To Know About The ‘Save Dehing Patkai’ Hashtag Trending On Social Media

I am Dehing Patkai Movement

In May 2020, people and environmentalists were enraged by the decision. They decided to protest against it by carrying out online protests as well as on the streets of Tinsukia and Margherita.

Members of the All Assam Students Union (AASU), Krishak Mukti Sangram Samiti, and other civil society led the protests. They started by forming a human chain and carrying posters and banners.

The hashtags #SaveDehingPatkai and #IamDehingPatkai trended on Twitter. The students from Gauhati University, Tezpur University, and Dibrugarh University and some prominent personalities too joined in the trend.

In July 2020, a division bench composed of Chief Justice and Justice asked the then Chief Minister Sarbananda Sonowal to file an affidavit by August about the inquiry it had ordered into allegations of illegal coal mining since 2003. The chief minister then constituted a one-man inquiry commission of a former Gauhati High Court Judge who investigated the allegation of illegal coal mining and the destruction of biodiversity.

In September 2020, the Guwahati High court directed the Tinsukia district judge to conduct a survey on mining and submit a report before November. The order issued said,

“In order to have the basic facts on record, we deemed it fit to direct the district judge, Tinsukia, to carry out a survey of the area mentioned in the petitions.”

The 58th meeting of the NBWL standing committee discussed the case pertaining to the use of the Saluki reserve forest for coal mining. They came to the decision that the mining activity is immediately stopped at the site. Furthermore, defer the matter till any further discussions with Coal India Limited.

The standing committee took serious note of the fact that the mine continued to operate without its recommendation for a long time and neither Coal India Limited nor the State Government Officials took the necessary steps for legal/statutory compliance.

Read more: MINUTES OF 59th MEETING OF THE STANDING COMMITTEE OF NATIONAL

Dehing Patkai, also called the ‘Amazon of the East, is the longest stretch of lowland rainforests in India. It is located in the Tinsukia and Dibrugarh districts of Assam. Dehing Patkai was declared a wildlife sanctuary in 2004. Later, it was upgraded into a national park in 2020. It was also declared Dehing Patkai Elephant Reserve under Project Elephant.