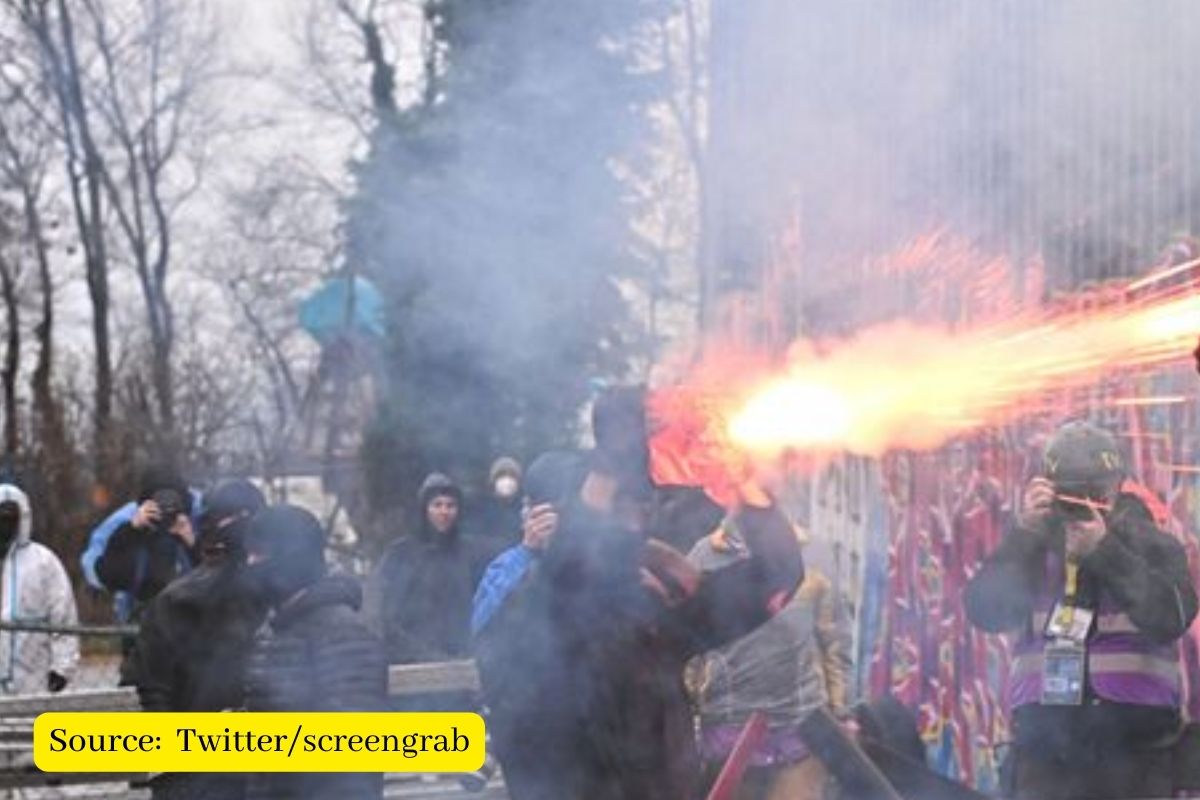 German police have started to evict a camp of climate activists in the town of Luetzerath. Protesters have been occupying the town for two years to prevent its demolition for the expansion of a lignite mine.

Protesters formed human chains, made a makeshift barricade out of old shipping containers and chanted “we are here, we are loud, because they are stealing our future” as helmeted police entered. Some threw stones, bottles and fireworks. The police also reported that the protesters were throwing Molotov cocktails.

The demonstrators, wearing masks, balaclavas or biosuits, have been protesting against the Garzweiler mine, run by the energy company RWE, in the village of Luetzerath, in the lignite district of the western state of North Rhine-Westphalia.

In the early hours of the day the protesters formed chains and chanted “we are here, we are loud, because they are stealing our future” as police in riot gear entered the town to evict them.

The inhabitants of Luetzerath, a small town about 40 kilometres west of Cologne, have already left the place long ago, but the activists have been occupying several buildings for months and their numbers have increased in recent weeks.

Authorities resumed work after working overnight to get several activists off the roof of an abandoned agricultural warehouse in Luetzerath and another from the wreckage of a car.

More than 200 environmentalists have already left the site voluntarily, Aachen police chief Dirk Weinspach, whose force is leading the operation said. The eviction of the warehouses should end on Thursday and then the police will focus on several treehouses built by the protesters and houses remaining in the town, he added.

With German energy giant RWE planning to expand a lignite mine, the town has come to become a symbol of activism against fossil fuels. RWE, the company that owns the mine, said in a statement on Wednesday that it would start demolishing the town.

Also Read:  Every year 10 million hectares of forest are destroyed in the world

Environmentalists say demolishing the town to expand the nearby Garzweiler mine would cause huge greenhouse gas emissions. The government and the electricity company RWE maintain that coal is necessary to guarantee the energy security of the country.

Some protesters denounced an excessive use of force by the police and others said that the scale of the police deployment, with officers, brought in from all over the country and water cannons in reserve, was an escalation not justified by the peaceful protest.

The regional and national governments, which in both cases include the Green Party, reached an agreement with RWE last year to allow the destruction of the abandoned town in exchange for ending coal use by 2030 instead of 2038.

Greta Thunberg will attend a concentration

Despite the intervention of the German authorities, the activists plan to meet again on Saturday in the framework of a rally not only to protest the activities of the energy company RWE but also for the eviction on Wednesday.

According to the German agency DPA, the prominent environmental activist Greta Thunberg plans to go to the town of Luetzerath on Saturday. Protesters from more than 50 points are expected to flock to the city.

Thunberg already visited the area in September 2021 – a day before the German federal elections – to protest RWE ‘s project to expand the lignite mine.