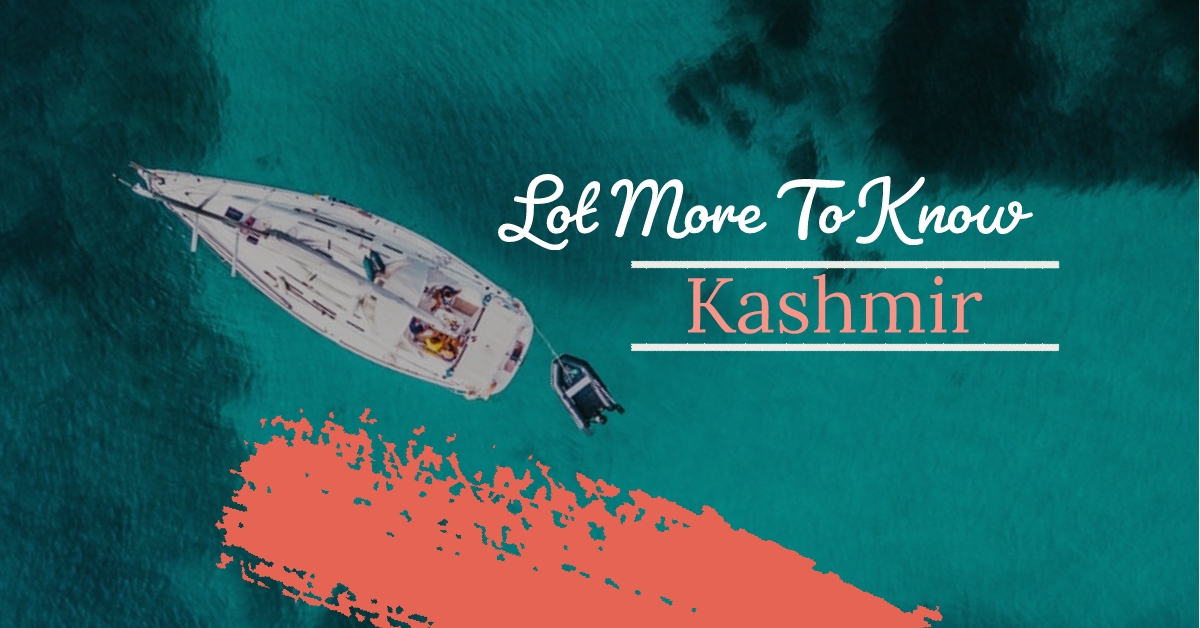 Wahid Bhat|SRINAGAR
amazing items ok kashmir : Kashmir, northernmost geographical region of the Indian subcontinent and paradise on earth has always been adored because of its beauty, rich culture, food and much more.

Kashmir is not only famous for its beauty and serenity but the state also offers authentic non-vegetarian dishes too.

Here are some unique things in Kashmiri culture which you should try.

A kanger (Kashmiri name), also known as kangri or kangid or kangir) is an earthen pot woven around with wicker filled with hot embers used by Kashmiris beneath their traditional clothing to keep the chill at bay, which is also regarded as a work of art. 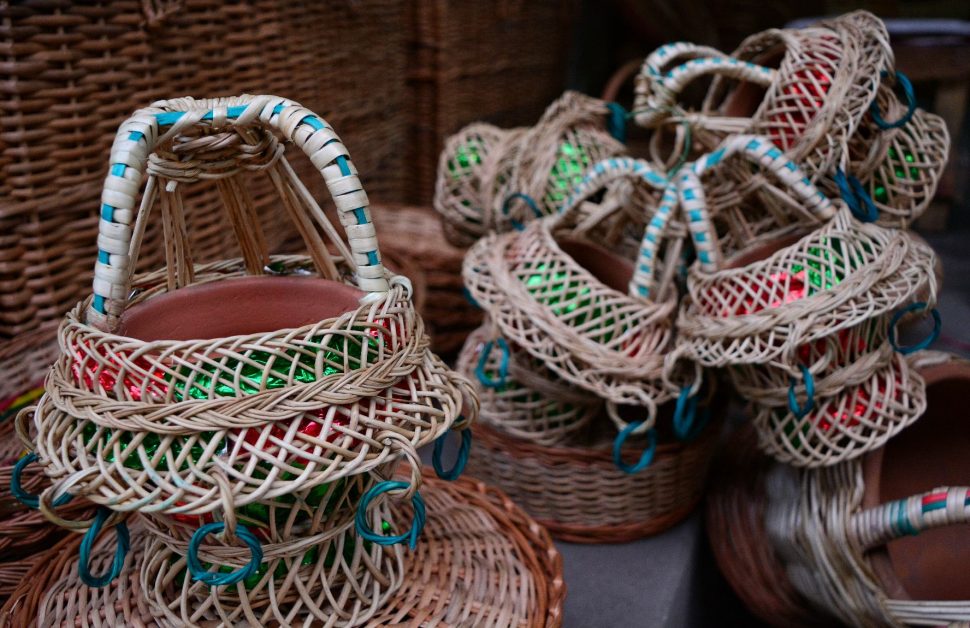 It is normally kept inside the Phiran, the Kashmiri cloak, or inside a blanket. If a person is wearing a jacket, it may be used as a hand warmer. It is about 6 inches (150 mm) in diameter and reaches a temperature of about 150 °F (66 °C). It comes in different variants, small ones for children and large ones for adults.

The kangiri is made up of two parts outer portion is an encasement of wicker with two handles. The inside has a bowl-shaped earthen pot called a kundol which is filled with hot embers and is kept beneath the pheran.

Charari Sharief town is the most famous for a peculiar kind of kangri called “charar kangir”. Anantnag is also another major producer. The sector is not organized but is covered under different government schemes. 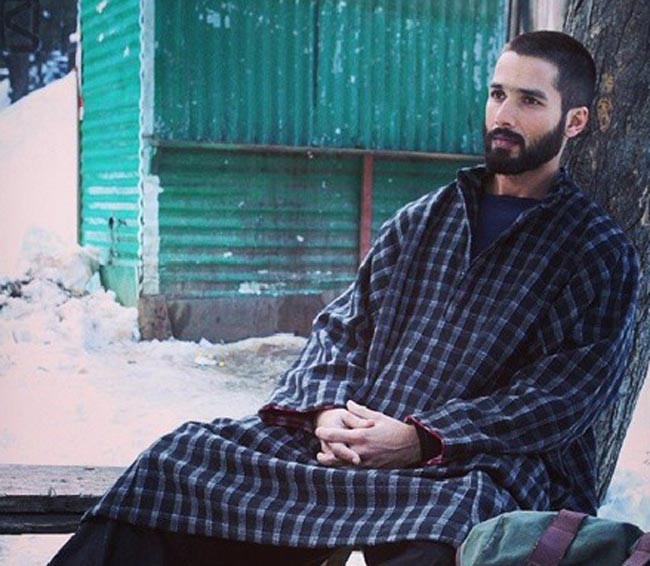 The traditional phiran and poots extends to the feet, which was popular up to the late 19th century C.E.

However, a relatively modern variation of the phiran and poots extends to below the knees, which is worn with a suthan inside (loose form of shalwar) similar to the styles worn in Afghanistan

The phiran is a loose upper garment loosely gathered at the sleeves which tend to be wide, made of either wool or jamewar which is a mixture of wool and cotton, with no side slits.

A samovar (Kashmiri: samavar) is a traditional Kashmiri kettle used to serve Kashmiri salted tea (Noon Chai) and kahwa. Kashmiri samovars are made of copper with engraved or embossed calligraphic motifs. 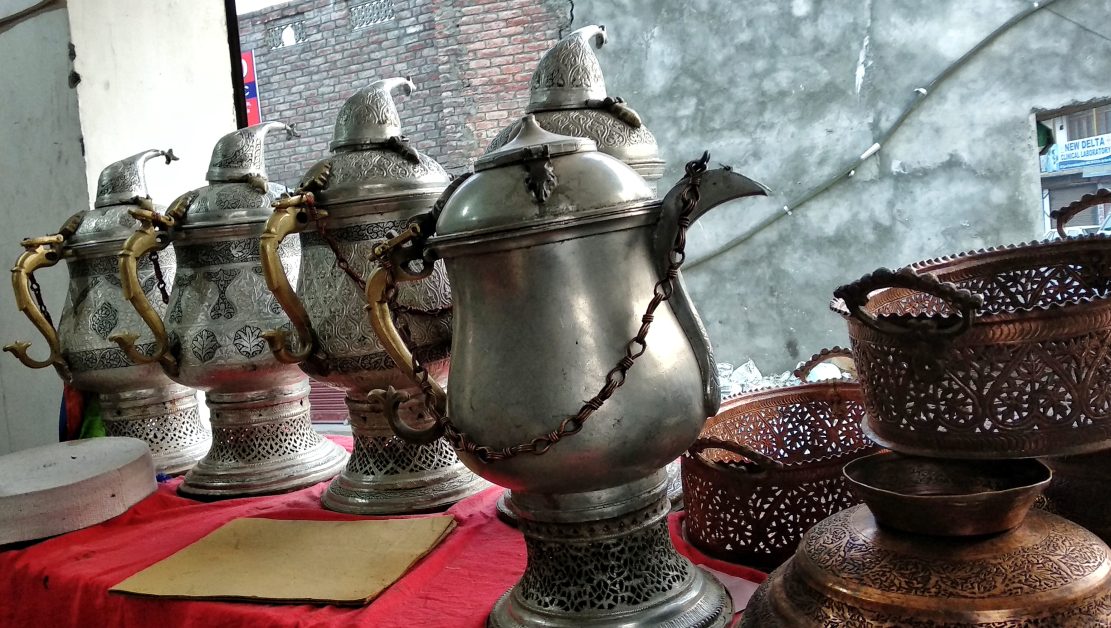 In fact in Kashmir, there were two variants of samovar. The copper samovar was used by Muslims and that of brass was used by local Hindus called Kashmiri Pandit.

Samovar is made of copper, the outside of the samovar is engraved with various designs. Inside, the samovar is tin-coated with a fire container in which charcoal is placed.

Kashmir Walnut Wood Carving is wood carving work that are manufactured in Kashmir. Kashmir contributes to around 98% of the country’s output of walnuts and carved walnut wood-work is amongst the most important crafts of Kashmir. 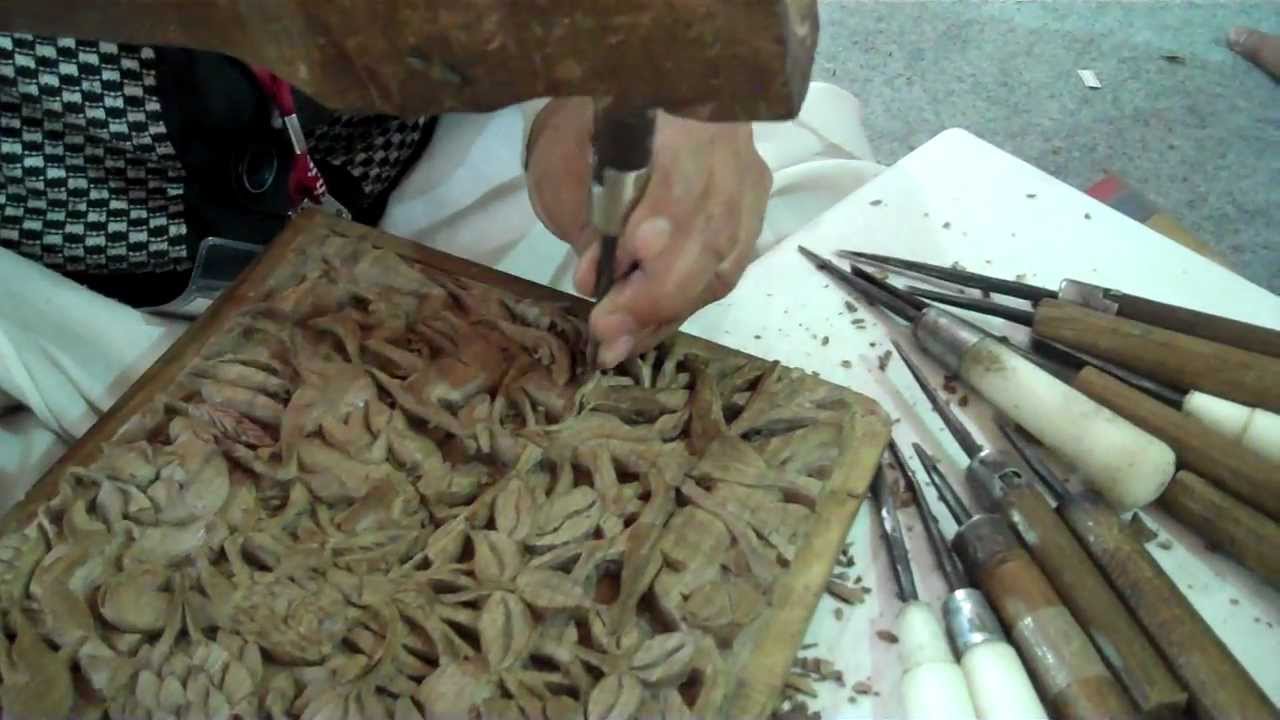 The Walnut Wood Carving work has been protected under the Geographical indication (GI) of the Agreement on Trade-Related Aspects of Intellectual Property Rights (TRIPS) agreement.

It is listed at item 182 as “Kashmir Walnut Wood Carving” of the GI Act 1999 of the Government of India with registration confirmed by the Controller General of Patents Designs and Trademarks.

Wazwan is a multi-course meal in Kashmiri cuisine, the preparation of which is considered an art and a point of pride in Kashmiri culture and identity. 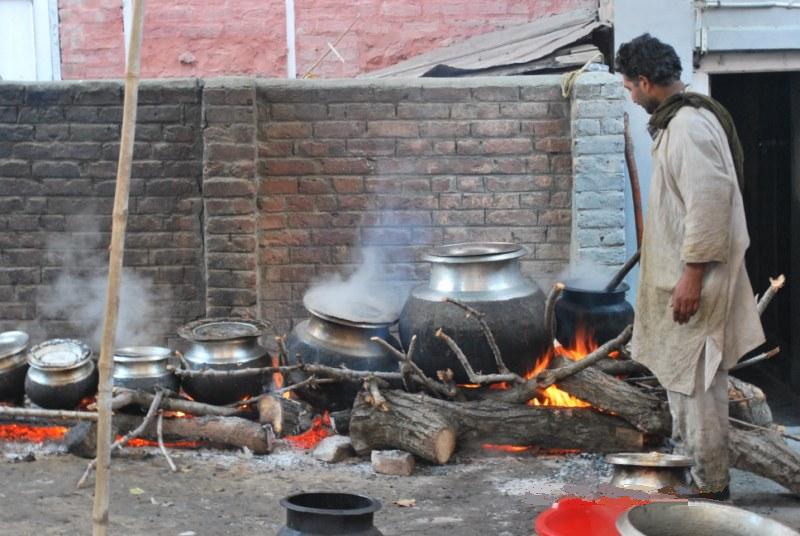 With different courses of dish are prepared by and under the supervision of the head chef called Vasta Waza in Kashmiri language, who is assisted by a team of chefs called Wazas.

Some essential delicacies of Wazwan include Tabakhmaaz (barbecued lamb ribs prepared in ghee), rista (a spicy gravy preparation of meatballs), and gushtaba (a big meatball cooked with yoghurt) and served at the end of the meal.