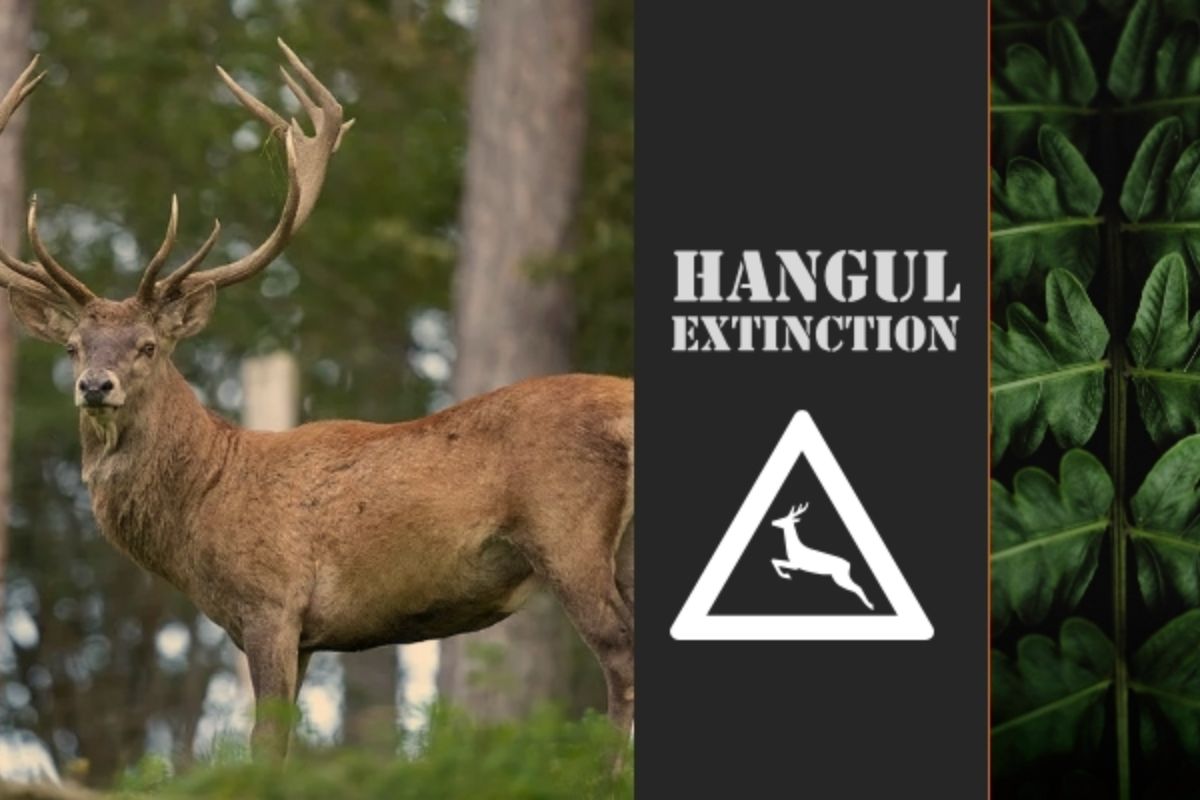 The number of Kashmir stag, known as hangul has declined since the early 20th century. In the early 1900s, the Kashmiri hangul deer population was estimated to be around 5000. Numbers have dwindled to only 261, with perhaps fewer reportedly surviving today.

While there have been varying estimates of the Hangul population over the years, with differences in data between official population statistics and independent research, the population is certain to be somewhere between 100 and 261. This is a significant decline since the early 20th century when the hangul population was estimated to be around 5,000. Those who study and monitor deer are now concerned that this critically endangered species (Hangul) could soon face extinction.

Some wildlife experts and activists have attributed the decline to the construction of cement factories near the animal’s habitats and wildlife sanctuaries. In addition, the construction of defense infrastructure and other human interventions have led to the fragmentation of their habitat, they point out.

Some wildlife experts and activists have attributed the decline to the construction of cement factories near the animal’s habitat and wildlife sanctuaries. In addition, the construction of defense infrastructure and other human interventions have led to the fragmentation of their habitat, they point out.

Hangul is not easy to spot. They are shy and quickly disappear into oak groves when they sense a human nearby.

Acknowledging that this was a situation that required urgent attention, Jammu and Kashmir Minister of Forests, Environment and Ecology Bali Bhagat said that his ministry had realized this reality and was restarting the necessary measures to conserve the animal. state.

The Hangul Project aimed to use modern technology to survey the hangul habitat and begin ex situ breeding to increase the Kashmiri deer population. A breeding center was spread over a five-acre wooded area in southern Kashmir and the idea was to release fawns into the wild with radio collars to track their movements.

Listed under schedule I of the Jammu and Kashmir Wildlife Protection Act 1978 and the Indian Wildlife (Protection) Act 1972, the hangul is among the four subspecies of red deer more widely distributed in the east, but at present, the Hangul population is restricted to Dachigam National Park.

Bacha said that last year he took a census of the Hangul population, inside and outside the Dachigam National Park, and his findings revealed that there are 110-130 Hanguls inside, while 40-50 deer outside the park on the mountain range. from the Himalayas.

Department officials claimed they too conducted the Hangul census, but quickly added that “the report is being analyzed and will be released soon” without providing clear details.

The IUCN Red List has designated it Critically Endangered, and it is also listed by the Convention on International Trade in Endangered Species of Wild Fauna and Flora (CITES)

In the mid-1980s, the then government of Jammu and Kashmir established a cement factory in the Khrew area due to the huge limestone deposits in the adjacent mountain range.

According to some estimates, there are currently about six cement factories in operation in Khrew, a fairly small town stretching over 12 km2.

A local activist campaigning against the cement factories, Adil Bhat, as well as some other activists, have said that since the government-owned factory was established, at least seven other privately owned cement factories have been established in the area some point out, it is likely a violation of wildlife conservation rules.

“Hangul is sensitive to smell and sound at a long distance. The sound is a big disturbance for hangul,” Ahmad said, referring to the explosion of limestone deposits around Khrew. He has done extensive studies on the ecology and biology of Hangul. In his experience, he notes that factory emissions have likely affected Hangul’s physiology and eating patterns. “Chemical emissions (particles) from cement factories rest on the grass in inhabited areas that Hangul consumes,” he said.

Altaf Hussain Dentoo, Wildlife Warden, Central division told the news agency—Kashmir News Observer (KNO) that there is a gradual increase in the population and there are no worrisome factors.

“As hangul is endangered but like other animals, they get their food naturally. In winter, during snowfall, we drop some vegetables, fresh leaves, and other things for them”, he said.

“The fecal matter of the Hangul will be sent to Hyderabad laboratory where through a very advanced method, we will find out the total number of Hangul”, Altaf said.