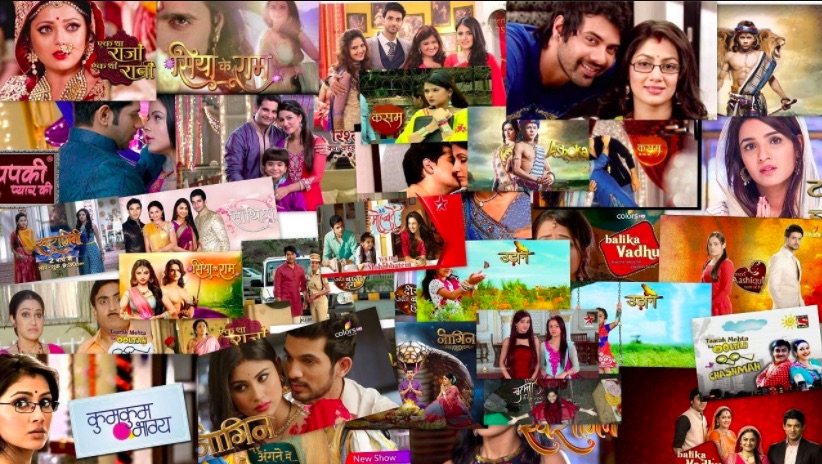 Ground Report | New Delhi: Indian soap operas; Dhooooom tanananana… a sound effect or a music piece one can find in every Indian soap opera: seems like it has become a part of the drama making process here. Adding to an already unrealistic scenario, the background music is as sensational as the script is. Not just the music and sounds but the script as well looks far from reality.

From vilifying a Western dress clad ambitious woman to portraying a traditional wearing “Adharsh Bahu.” From creating scenarios where the lead actor has more than two rebirths to the lead actress losing her memories in an accident. From changing the entire look, even voice through plastic surgery to meeting a new lead hero, who of course the lead actress will ditch after regaining her memories back. From getting ” Shakti” ( divine power) from the Gods to operating a dead man and bringing them back to life. The scripts have all the bizarre situations and scenarios one can possibly think of. And sometimes there are stories which one cannot even imagine of. And to add to it there are these overdramatic situations and scenes: where the lead actress falls from the stairs and continues to fall for upcoming six to seven episodes until there is a precap of a special episode and the makers will ask the audiences, “Kya bacchaegi Kundli ki jaan?” and “Ya phir hai yeh inki prem Kahani ka ant?”  Simply over-dramatic unrealistic scenarios which do not even fit with real life.

Since these soap operas are mostly women-centric their target audiences are also women, but if one looks around not just women but men and children and to put it in the right words families follow these dramas religiously. Though there is nothing wrong with watching them for entertainment. But is it worth it? These long-running soap operas all have the same script in the end, saas-bahu issues and a female lead who is on a mission to solve all the saazishaen that have been done against her. These scripts glorify misery, the stereotype that a woman wearing a short dress is going to be the vamp and the one wearing traditional attire is going to be the actress. And to add to it the male lead is often shown as a weak character who just cannot decide whether to follow his villain mother or his actress wife.

There are situations where the romance between a married couple is shown in such a way that one wonders what is going on? Not to forget about how pregnancy lasts for not nine months but one whole year to create more dramatic situations. And the pregnancy of the villain lasts even longer and is kept hidden to create hype. “Kab khullaega Seema ki pregnancy ka raaz?” is often said in every promo and to dismay, the raaz is never disclosed because before that Seema will have a miscarriage. After having the miscarriage either she will finally get on a good path or vow to take revenge for the death of her child from the family, who had no firsthand involvement in her misery.

Recently a video went viral on Twitter, showing two Arab men reenacting a scene from Indian soap operas. A man can be seen wearing some clothes styled as a saree with an aarthi plate in his hands when suddenly someone steps on his saree and he pretends to fall down, rolling throughout the hall, over the sofa, through the door and down the staircase and the ground before finally landing in the arms of one who apparently is shown as the lead hero. This whole situation however is accompanied by dramatic music Dhoooom Tananannananna making it more amusing. And what is noticeable is the shy smile as the two men who are in their characters, hold each other and suddenly the music also changes to a romantic soft piece. This 18 seconds clip however has just shown what every Indian soap opera shows every day over the years, changing the situations.

And then there are supernatural dramas where “Naagins, Naags, Dayans, Pisaachs,” not only them but a possible “icchadari bhaensa” also exist with very humans and they have their share of romance and love with human characters. Their romance leads to the birth of a “teesri shakti.” The Naagin mother and human father have their season where the story entirely revolves around them and their unreal romance and how they fight situations which nowhere are to be seen in real lives. While their child the “teesri shakti” has their own separate season where they play the role around in the same script.

These soap operas when end either have a happy ending or another season in which revenge and justice will be served. However, there is no end to the misery that is shown in these dramas. A homemaking woman is shown to be weak and subjected to all kinds of atrocities until one day when she meets an accident. After losing her memories and a leap of two years she returns as an independent woman. Accompanied by a second lead who at first is shown as the second protagonist as he is in love with the actress only to be changed into an antagonist sometime later. The independent woman on remembering everything about her past gives upon her independence once again and starts to live her old life and once again the story is repeated on a loop. Only the characters change the story remains the same.

Almost every show starts off on a unique and intriguing note, but no matter how amazing the start is, the show loses its allure after a while because it succumbs to clichés. This occurs because of:

Soap Opera and its history

A soap opera is a broadcast enacted story delivered in repeating episodes over a period of time. The term comes from the fact that the serials were predominantly sponsored by soap/detergent companies, which shared the same target audience as the shows – homemaking women.

Miguel Sabido proposed a social and behaviour change communication strategy of ” Entertainment- Education” which is also called edutainment. The idea behind the theory was to combine elements of both education and entertainment in a way that complement each other. The dramas were created as such to attract the masses and had both moral and commercial values.

Sabido believed that entertainment-education programmes can be utilized to affect society, and he showed this by producing seven soap operas in Mexico from 1975 to 1982. These performances were popular and encouraged prosocial conduct. A character in his soap opera, Ven Conmigo (come with me), once went to an adult literacy center to pick up a booklet. The next day, throngs of individuals who had seen the broadcast flocked to the same center featured in the show to pick up their own copy of the booklet. The show had such an impact that enrollments in adult learning centers skyrocketed during the time it was on the air. A successful example is “Hum Log” (we people) which was the first Indian soap opera that was broadcasted on Doordarshan from July 1984 to December 1985. The show was an instant hit and audiences could relate to the characters. In these kinds of soap operas, the good people were rewarded and the bad people were punished in order to encourage and help the audiences to make decisions.

For the most part, Indian soap operas have remained trapped within a collapsing framework that benefits neither the individual nor society as a whole. But why do these stories exist? Why don’t these scripts change? Why does the audience enjoy it?