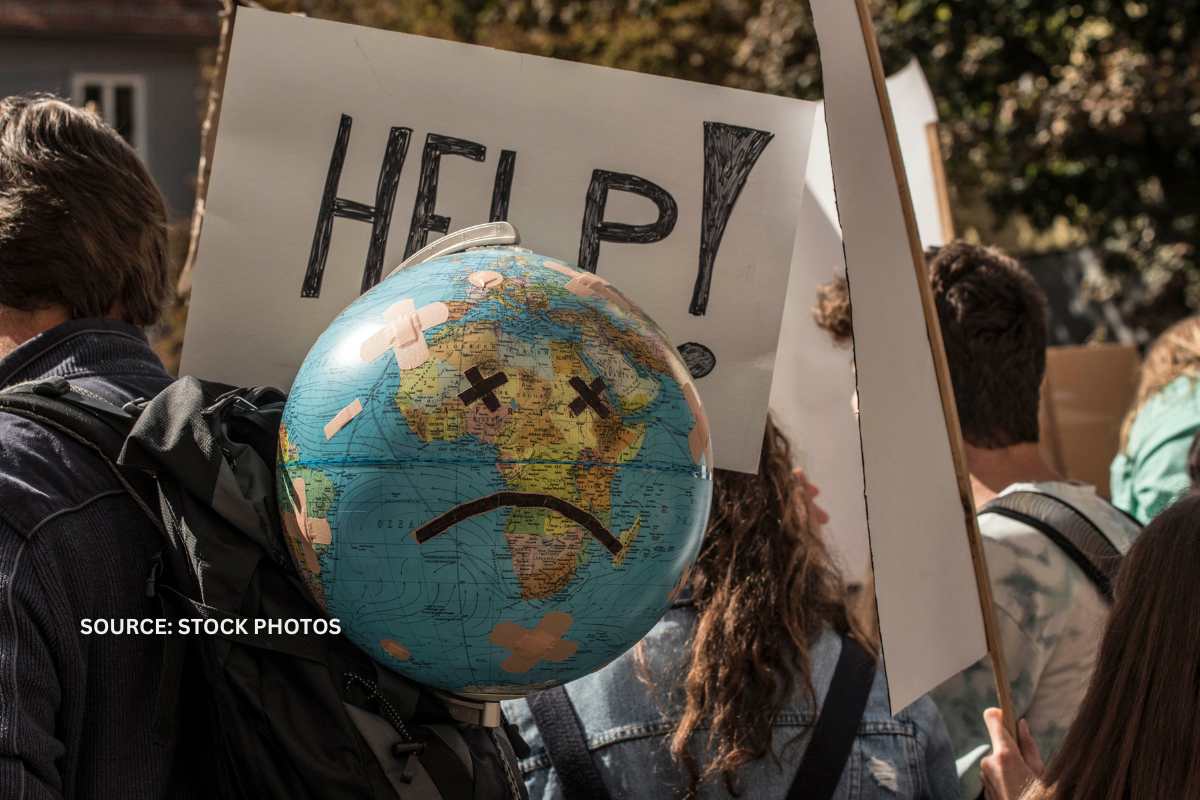 One of the smallest countries located somewhere between Hawaii and Australia is the island nation of Tuvalu. It is also one of the most vulnerable to climate change given the threat of ever-rising sea levels. So much so, that it is uploading itself on the metaverse just to ensure their existence!

That is the level of threat Tuvalu currently faces.

In an instance back in 2014, a family from Tuvalu became the first in the world to gain residency as a climate refugee in another country. The reason for their displacement from Tuvalu to New Zealand was the saltwater encroachment as a result of rising tides, polluting the limited freshwater sources used by the residents of Tuvalu for drinking.

Although, this was not the first and particularly not the last such application filed by victims of climate change. Several others were filed and subsequently rejected.

The 1951 Refugee Convention still does not recognize people displaced because of climate change and its effects as refugees due to the absence of a “persecuting” agent. The only difference is that the stressor here is the environment and the after-effects of changing climate.

FROM INTERNAL DISPLACEMENT TO MIGRATION OVERSEAS

Migration from climate change is mostly known to be internal. But the cost of displacement and subsequent rehabilitation is only expected to grow in the near future. According to the Groundswell Report, there are expected to be over 216 million people across six major regions of the world by 2050. And, these shall be displaced within their own countries, owing to environmental stressors and difficulties in living conditions of their environment.

According to UNHCR, the ever-growing intensity and frequency of natural calamities like floods, droughts, cyclones, rising sea levels, desertification, etc are known to affect over 20 million people. Furthermore, these calamities will push them to leave their homes each year. All these 20 million people are/will be displaced within their own countries. Eventually, lots of them will/are forced out of their countries.

In the Central American country of El Salvador, for example, several people are forced to leave their native villages each year due to crop failure and the subsequent loss of livelihood. These internally displaced persons (IDPs) then move to nearby cities. Here, the IDPs are subjected to gang violence and seen as a targeted group, ultimately forcing them to flee the country.

SUBMERGENCE OF THE PACIFIC ISLANDS

One prominent region of the world that is bound to prompt the displacement of several people due to climate change is the pacific group of islands. The rising sea levels are alarming as eight islands part of the Solomon archipelago has already submerged. The Solomon Islands are hence the first “sinking islands” of the 21st century.

The sea level is known to be rising at 12mm per year in the western Pacific Ocean. This is putting several island nations at risk of submergence causing mass destruction and displacement. It has been estimated that by the end of this century, 48 islands of the pacific will be lost to rising sea levels.

Read more: Climate change can force 216 million people to migrate within their own countries by 2050

The islands of Micronesia have not only been subjected to rising sea levels of the Pacific Ocean. But, also lies in the most active tropical cyclone basin of the world. With an increase in the frequency and intensity of such cyclones, the small island group has shrunk over time. This has made several islands uninhabitable and saltwater encroachment makes the availability of drinking water a serious issue.

Despite having a population of only about 2.3 million people spread across 11 island groups of the Pacific there is no heed to the situation. Furthermore, the issue of possible submergence and migration poses the bigger question of how far mitigation strategies have taken us. Additionally, how impactful are the newly adopted policies and targets?

Although the pacific island groups remain at the highest risk of destruction, the rest of the world is not very far behind the tide.

Read more: A tiny country threatened by rising sea levels is uploading itself into the metaverse to guarantee its existence

TRIGGERS IN THE INDIAN SUBCONTINENT

In Bangladesh, the increasing number of tropical cyclones propagating in the Bay of Bengal has been the reason for excessive floods and destruction along the coast. Additionally, all of this poses threat to the biodiversity hotspot of the Sundarbans Delta. In a country where 70% of its land is employed in agriculture and allied activities, continued flooding has led to increased salt content in the land. Over 53% of land in Bangladesh faces the issue of increased salinity.

Furthermore, this raises the question of food security as well as the foundation of its economy being at risk. These factors are bound to drive people out of the country, creating more climate migrants globally. It is expected that nearly 10% of Bangladeshis will be forced to leave their country by 2050, owing to its uninhabitable conditions.

The situation in Bangladesh is being mitigated, in this instance by implementing a project called The Salt Solution. In this project, the local NGOs have taken up the responsibility to educate farmers about the kind of crops that can be grown in the affected soil. The project has proven successful so far with 10,000 farmers trained, and two to three extra harvests each year.

Besides saline soil, Bangladesh also faces the problem of Rohingya refugees, which mostly reside in camps. Without proper measures, there is a high possibility of them turning into climate refugees as the country faces a high frequency of natural calamities. The UNHCR has been working with local partners in planting fast-growing trees to avoid landslides as this is a common problem during the monsoon season in Bangladesh. This helps stabilize the ground and reduces the chances of displacement of soil under a heavy downpour.

According to the UNHCR, 90% of its refugees originally belong to countries that are on the frontlines of climate emergencies. Such countries are often the poorest. They lack the means and political will to tackle and mitigate climate change.

Afghanistan is another prime example in this case. Although, there are hardly any alarming emissions contributed by Afghanistan itself. But, is at the highest risk from the after-effects of climate change.

With a long history of political turmoil, climate mitigation was always on the low-priority list of Afghanistan. The impact of rising temperatures, frequent droughts, and flash floods, in the primarily agricultural country of Afghanistan is creating a crisis. Food security is at the highest risk, forcing people to migrate from villages to cities. Coupled with the takeover of the country by the Taliban, migration not internally, but from the country by several, has become inevitable.

When it comes to the question of holding someone accountable or assessing the damage caused to the environment by a particular country, we automatically look at its carbon emissions. But in the case of climate migrants, emissions and vulnerability do not actually go hand in hand.

A common pattern that can be noticed is that the countries with the least carbon emissions (usually owing to the low status of development) are at the highest risk from climate change. Developed countries, on the other hand, may or may not be at high risk currently, but are adequately equipped to mitigate such changes in the future.

This brings in the question of climate justice or equity. Proper representation and easy access to the means of mitigation are two things that can ensure risk reduction in regard to developing and under-developed nations. Proper assistance from developed nations, in funding as well as technology, is of ardent use.

While there has been growing concern on the global platform for legal recognition of “climate migrants,” there is no denying the fact that like other kinds of refugees, these migrants are unwilling to leave their homes.

Even residents of the aforementioned small island nations are speaking out that they do not wish to be climate refugees in a foreign country. Rather, they want to be able to stay in their own homes with dignity.

But the fact remains that climate migration is mainly an internal issue, where people move from one place to another within their own country unless forced to migrate outside due to other factors. This presses the issue of making migration management and mitigation strategies within the said country rather than refugee protection.

Read more: Why climate migrants do not have refugee status

Climate change-induced migration is supposed to affect people globally. It might seem restricted at the moment. But, with ever-increasing carbon emissions and the failure of countries to meet their net zero targets in time, all of the 8 billion people on earth are bound to be victims of this catastrophe. More than the legality and the management of climate migrants, it is an issue that is time-sensitive and needs to be tackled before millions of people are deprived of a home and forced to live the lives of refugees.

Regardless, formal and legal recognition of climate migrants is extremely necessary at this point in order to better protect their human rights and help them find refuge in regions of climate vulnerability. Being forced to leave one home is only the beginning. But, proper rehabilitation can only be ensured with legal protection of the human rights of all climate refugees.

As the global population rises, having recently reached the 8 billion mark.

Most of the highly fertile nations are located in the tropical region of the world and will witness the most growth in population in the coming years. Coincidentally, the tropics are also the region that is considered most vulnerable to the changes in climate and its subsequent effects. A region that hosts multiple developing nations, several among those going through political conflict puts the countries here at the highest possible risk of getting affected by the changing climate.

Read more: There could be 1.2 billion climate refugees by 2050. Here’s what you need to know | Zurich Insurance

Countries need to evaluate the current and possible future impacts of climate change. As climate change-induced migration is mostly internal, this will be helpful in the rehabilitation of the victims in their own countries to avoid migration overseas.

Climate financing is a big issue as most countries worst hit by climate change can barely afford to fund projects of mitigation. Developed nations and international organizations need to undertake the responsibility of assisting underdeveloped countries in fighting climate change through adequate financing.

At last, meeting their said targets in the Paris Agreement of net zero emissions, transitioning towards non-fossil fuel-based energy, as well as encouraging and facilitating the lesser developed nations through financial and technical assistance can prove to be a very proactive step in countering the problem of climate migrants by tackling the stressor – “Climate Change” directly.