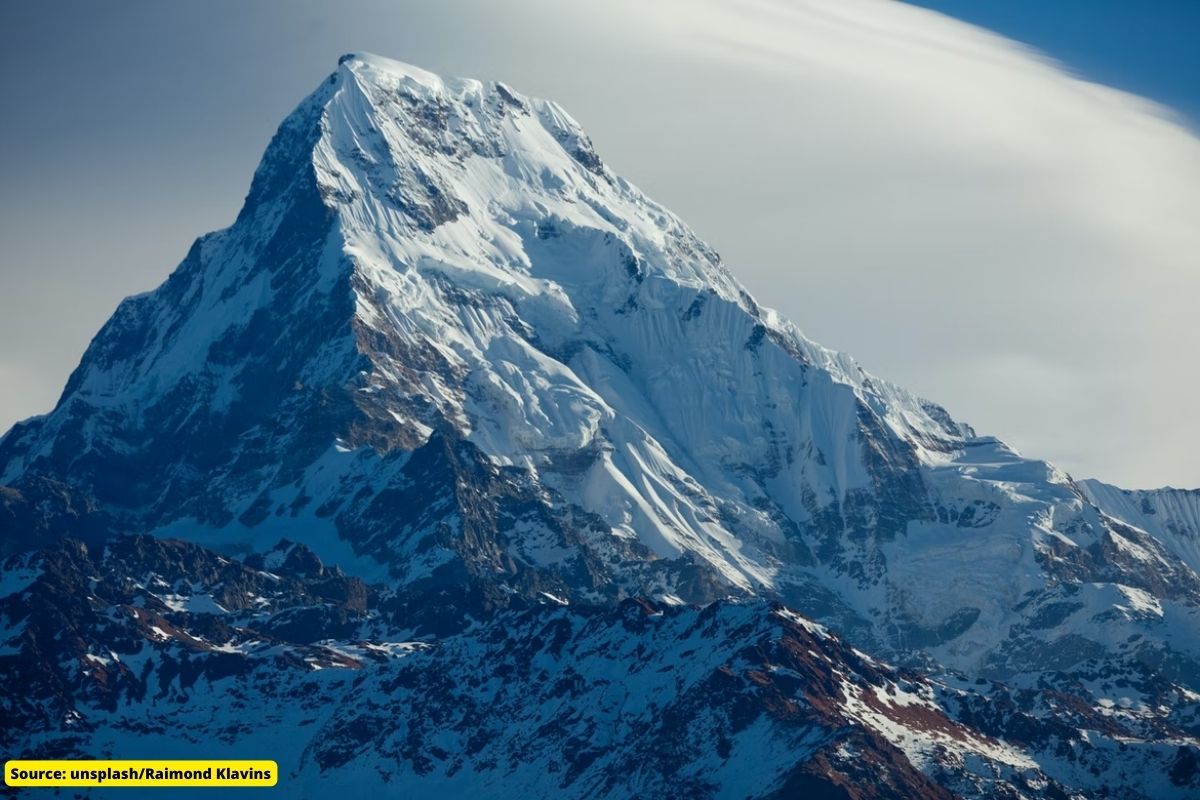 In the Himalayas, a mountain system that stretches across Bhutan, Nepal, China, India and Pakistan and whose name means abode of snow in Sanskrit, rivers fed by glaciers provide water to more than a billion people for the production of food and hydroelectric power.

India and Nepal, in particular, rely on meltwater to buffer seasonal droughts before the summer monsoon. New data from satellites allowed researchers to measure changes in the volume of ice masses over a period of 40 years, reflecting an article published by The Third Pole.

Research shows that ice loss from Himalayan glaciers has doubled in the last 20 years and is similar to the global rate. Although extreme altitudes were thought to protect them from climate change, it is now known that high mountains are warming twice as fast as the rest of the planet.

Glaciologists have come up with computer models to project how glaciers will change in the future. Experts have indicated that between a third and a half of the ice in the Himalayan glaciers will be lost by 2100. And if action is not taken to keep global warming within the Paris Agreement target of 1.5 degrees Celsius then up to two-thirds of glaciers will be lost in the same period.

The result of this initiative is a 627-page document produced over the past five years at the International Center for Integral Mountain Development (Icimod), a learning institution that serves the eight countries located within the 3,500-kilometer mountain range. region (Afghanistan, Bangladesh, Bhutan, China, India, Myanmar, Nepal and Pakistan) to help understand and adapt to climate changes.

These changes will affect people with fewer resources. A third of the Himalayan population subsists on less than $1.9/day. The findings are “alarming,” in Wester’s words. In November 2018, the UN Intergovernmental Panel on Climate Change (IPCC) already called for drastic measures after warning that the average global temperature has increased by one degree compared to pre-industrial levels due to greenhouse gas emissions greenhouse effect such as carbon dioxide (CO 2) caused by man and that between 2030 and 2052 such an increase is likely to be 1.5 °C if the current rate of emissions continues, which, at the very least, should be reduced by half in the next decade.

Third less glaciers in the best of cases

The Hindu Kush and Himalayan regions were formed 70 million years ago, and it was not until the 1970s that a decrease in its ice masses began to be observed. “Already 14% of the third pole has been lost,” Wester points out. In the worst-case scenario, that global warming is not contained, the study warns that current emissions would lead to a rise of up to five degrees in the mountains and a loss of two-thirds of their glaciers by 2100.

Funds requested for climate disasters increase by 800%
Flood threat in Kashmir may increase due to increase in monsoon rains
Less air pollution will increase agricultural production by 8% in India: Study

The worsening of the current conditions would mean more disasters and sudden changes that can lead to the outbreak of conflicts between the affected countries. “The HKH is geologically fragile, with young mountains that are vulnerable to erosion and landslides even without human interference. The region is undergoing rapid transformation driven by forces such as climate change, natural disasters, economic growth, globalization, infrastructure development, migration and land-use change. These changes are having and will have important consequences, not only for the people living in the region but also globally,” the report says.

Wester explains why the temperature in the mountains rises more than the global one: “This figure of 1.5 is an average. The temperatures in the oceans vary more slowly than on land,” he reasons. And he provides a second reason: “We’re finding in the mountains what we call elevation-predicted warming.” This phenomenon, of which there are numerous studies, means that the higher the altitude, the higher the temperature, which means that high mountain environments experience more rapid changes than those located at lower elevations. “We don’t really know why it happens, it’s a very interesting thing that we’ve seen over the last 100 years.”

Greenhouse gases are largely responsible for global warming and, furthermore, their impact is exacerbated by air pollution in this area, one of the most polluted in the world. Black carbon and dust are deposited on glaciers and accelerate their disappearance, as well as the change in monsoon circulation and precipitation distribution in Asia. This has consequences: When the ice masses melt, the water flows into lakes and rivers whose volume increases, something that can cause floods and the destruction of crops and populated areas. In fact, with the melting of these glaciers, the flow of the main rivers that cross Asia will increase: the Indus, the Ganges and the Brahmaputra or the Mekong, according to the study, which directly or indirectly supply food, and clean air.

The report highlights that these changes will have a greater impact on people with fewer resources in the region. Of the 250 million people who live in the mountains, about a third subsist on less than $1.9 a day, 30% of the entire population does not have enough to eat, and about 50% suffer from some form of malnutrition. Children and women are the most affected.

But the Hindu Kush Himalayas have possibilities to reverse this situation of misery. Specifically, with its hydroelectric potential, of about 500 gigawatts according to this research, that would be enough to power 500 million homes.

However, more than 80% of the rural population still depends on traditional fuels for cooking such as firewood, dung or charcoal, and another 400 million people in the eight countries of the region lack access to electricity. To date, measures to improve energy supply have had unsatisfactory results due to low prioritization and the inability to address the challenges posed by the region’s remoteness and fragility.

The affected population would exceed 1,000 million

The study, carried out by 350 experts from 22 different countries over five years, shows that even if the goal of the 2015 Paris Agreement of keeping global warming to 1.5°C is met, warming in this region will be 0 .3°C higher, and will mean the loss of a third of the glaciers. This devastating consequence will trigger, according to the report, “serious biophysical and socioeconomic impacts, such as loss of biodiversity and less predictable water availability.”

Climate changes in this region will directly affect the well-being and quality of life of its inhabitants, as well as the available resources. The Hindu Kush – Himalayas (HKH) covers an area of ​​approximately four million square kilometres, stretching from Afghanistan to Myanmar. The report has analyzed the state of 50,000 glaciers in two large mountain systems, whose length adds up to 3,500 kilometres.

As a consequence of the melting of the glaciers, the main rivers of Asia will suffer the consequences, and this will affect more than one billion people who live in these areas. Specifically, according to the latest available data from 2017, the total population residing in the major river basins of the HKH is approximately 1.9 billion. For this reason, adaptation to climate change is an issue of global urgency for this region, and governments should adopt effective policies in the face of this challenge.

In the same way, this will considerably affect air pollution. “Air pollutants originating in and near the HKH amplify the effects of greenhouse gases, and accelerate cryosphere melting through deposition of black carbon and dust, monsoon circulation, and rainfall distribution over Asia,” the study clarifies.

The report also highlights that the HKH region is undergoing transformations very quickly, caused by climate change, globalization and migration, among other factors. In this way, the consequences of the melting of the glaciers will not only affect this area but also worldwide.

Experts predict an uncertain future. Effective political actions are necessary to reduce the risk of natural disasters and also to adapt the population to them. On the other hand, “collaboration between state and non-state actors is essential. To achieve prosperity in 2080, it is important to consider two pathways: investment in sustainable development with regional cooperation, and investment with local and national cooperation .”