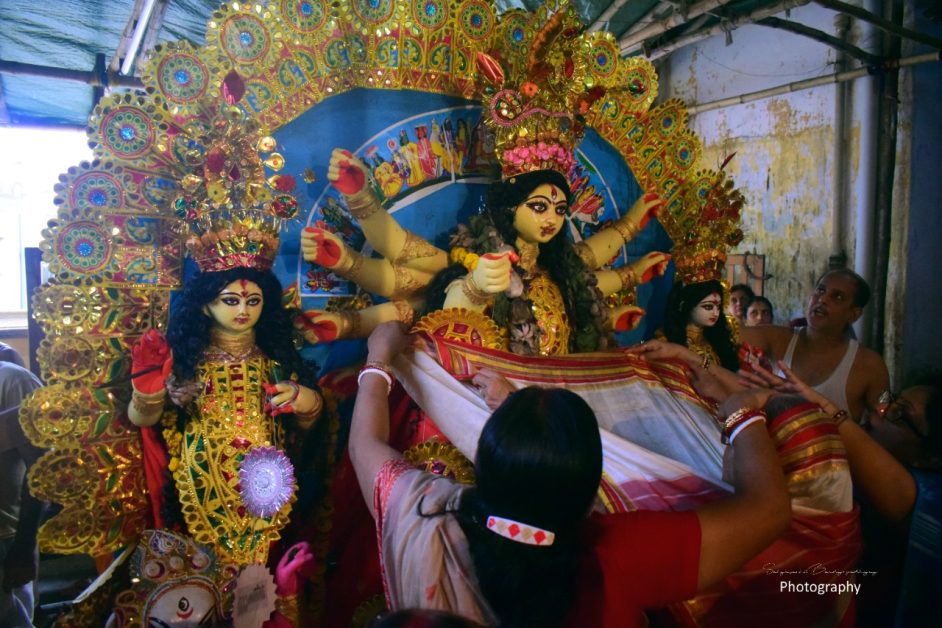 Ground Report | New Delhi: Durga Puja in Traditional Bonedi; Durga Puja is an age-old festival that is celebrated for a period of 5 days (Maha Soshti to Maha Dashami) all over India but is mainly prevalent in West Bengal and Bangladesh.

The history of the festival goes back to the 16th Century when the kings used to sponsor the Puja. This age-old custom is still now prevalent in some Rajbaris and Bonedi Baris in West Bengal. Some examples are Srirampore Rajbari in Serampore, Hoogly District of W.B, Shabornyo Roy Chowdhuri Bari in Sakherbazaar, Behala, South Kolkata, Shobhabazaar Rajbari in Shobhabazaar, North Kolkata, and various other traditional families.

He was associated with Hari Sava in the Behala Naskarpur area since 1880 and was secretary and president of that institution for a long time. The Banerjee’s had family business over a period of time. The Puja is currently being conducted for 5 Generations by the Banerjee’s whereas the traditional house is 8th Generation old and was built in the 19th Century.

The puja was started in a pot or Kalash worship process in 1918. After that, it was done by idol worship process from 1919 till 1939. From 1939 to 1941 during the 2nd world war, the family had to shift from their house in Banamali Naskar Road, Behala to Ashu Biswas Road near Paddapukur, Bhawanipur, Kolkata, and there the puja was done by worshipping the photographs of the Goddess Durga. (Durga Puja in Traditional Bonedi)

One special characteristic of the Puja is that the Thakur Dalan that is the raised platform where the idol is placed is of full clay. It has been like that since the start and has not been touched till now for transformation. Another traditional custom is that the idol is carried to the immersion place in a palanquin system by people like it used to be in traditional zamindar and royal families on the final day of Doshomi.