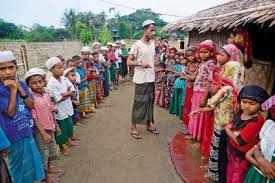 The Jammu and Kashmir administration conducted a special operation on Saturday to collect biometric and other important details of illegal Rohingya immigrants from Myanmar who have been living here for a long time.

The process of investigating these migrants from Myanmar was carried out amidst high-level security arrangements at the MA Stadium. During this time, local media persons were not allowed to enter the stadium premises.

Jammu Range Police IG Mukesh Singh said after this one-day process, “As per the notification of the Home Department on March 5, 2021, 155 illegal Rohingya migrants residing in the Union Territory of Jammu and Kashmir were sent to the holding center on Saturday.”

According to the police, “Hiranagar, a sub-jail in Kathua district, has been converted into a holding center to keep these illegal migrants.”

IG Jammu said, “This was done under Section 3 (2) E of the Foreigners Act. It followed the procedures of law. These immigrants did not have valid travel documents as per Section (3) of the Passport Act.”

Mukesh Singh said that the process of identifying such migrants will continue now.

IG Jammu Mukesh Singh said that after sending these migrants to the holding center, it will be ascertained from which country they belong.

He informed that after the completion of the nationality check, the process of deporting these illegal immigrants to their country will be started.