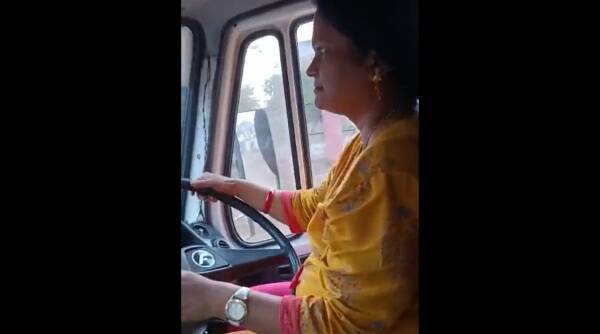 Ground Report | New Delhi: Yogita Satav women driver; In an unexpected incident, 42-year-old Yogita Satav, a housewife from Pune’s Wagholi area, took command of the steering wheel of a 20-seater minibus for the first time in her life after the driver suffered a seizure.

A video of this incident that happened on 7 January has gone viral on social media. A woman named Yogita Satav was traveling with other women and children after having a picnic at an agro-tourism center in Shirur, near Pune.

ALSO READ: Why Army deployed at Kashmir Press club, What is happening?

The driver showed signs of a seizure and stopped the vehicle in the middle of a deserted road. As the women and children on the bus started crying in panic, Satav stepped in to control the wheel and took him to the hospital.

“Since I knew how to drive a car, I decided to take charge of the bus. The first important task was to provide proper medical treatment to the driver. So, I drove to a nearby hospital and got him admitted there,” Yogita said.

She continued, “Some of the female passengers I met told me that they were really scared… They said they were crying… But Yogita Tai had a very brilliant mind by commanding the bus and ensuring everyone’s safety. Shown.”

“He said he was feeling dizzy and could not see anything, he was driving the bus in a haphazard manner… Everyone on the bus started screaming… Some of the women were really crying. I was sitting right behind the driver. I went up to him and asked what was wrong. He could barely tell me he was feeling unwell. I told him if he had to drive the bus. If there is trouble, I will run it,” Yogita told Indian Express.

“I have a lot of car driving experience, but I had never driven a bus or a heavy vehicle in my life. Car gears are smooth, bus gears are tight. As soon as I started the car, I struggled to put it in first gear. As soon as I put the vehicle in first gear, it went in the opposite direction. This happened three times. Then, instead of pushing the gear to the left, as is done in cars, I pulled it to the right. The vehicle moved forward. Then I realized that ‘bus ka system ulta hai’ (bus gears work differently),” she said.

Once the bus was on the road, Yogita said she had no problem navigating the potholes. “There was hardly any traffic on the road. I drove the bus like I drive my car, staying in control of the vehicle and trying not to overspeed or overtake,” she said.

Yogita said that while she was driving, the passengers neither interfered nor tried to guide her. “Maybe because they knew I could drive a four-wheeler. But they didn’t know that I had never driven a bus… Maybe, given my confidence level, they kept quiet and the panic between them went away,” she said.