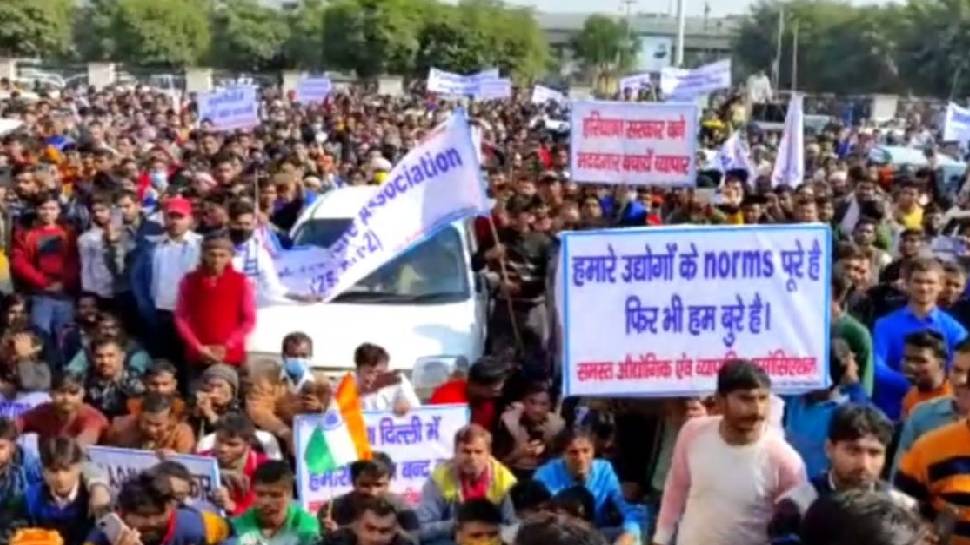 Ground Report | New Delhi: Why Panipat Industrialists protesting; Industrialists of Panipat took to the road in protest against the Central Pollution Control Board’s (CPCB) order to shut down coal-fired factories and run factories in one shift on Saturday and Sunday due to rising pollution in Delhi-NCR. When they got down, they protested vigorously across the city raising slogans against the order.

The protesters alleged that due to the restrictions, most industries located in the NCR are shutting down and causing a loss of over ₹300 crore every month.

Industrialists also took out a protest march from Gymkhana Club to Mini Secretariat. Protesting under the banner of various associations, he disrupted traffic on NH-44, Jind-Panipat, Panipat-Rohtak and Panipat-Haridwar highways and later ended the agitation by giving a memorandum to the Panipat Deputy Commissioner’s office.

ALSO READ: School Kholo Protest of Tribal students in Latehar, What are their demands?

President of Panipat Dyers Association Bheem Rana said that in the last several days’ many units have been closed, due to which thousands of laborers have become unemployed. He said production has also been affected by the restrictions and industrialists are unable to meet the demand.

He said that due to the ever-increasing pollution in Delhi, factories in Panipat are closed every year, so they demand that Panipat should be taken out of NCR.

He said that the Panipat industry is facing the brunt of increasing pollution in Delhi, which has affected thousands of families. He said that the government is not listening to him and the Panipat industry is being closed without any fault, which he will not tolerate. If the government does not accept their demands, then the movement will be intensified by taking the path of struggle. (Why Panipat Industrialists protesting)

Earlier, Air Quality Management Commission’s (CAQM) order to shut industrial operations in the NCR till December 12. In view of the deteriorating air quality in the national capital, the CAQM on Tuesday ordered the immediate closure of industries not running on PNG or clean fuel till December 12.