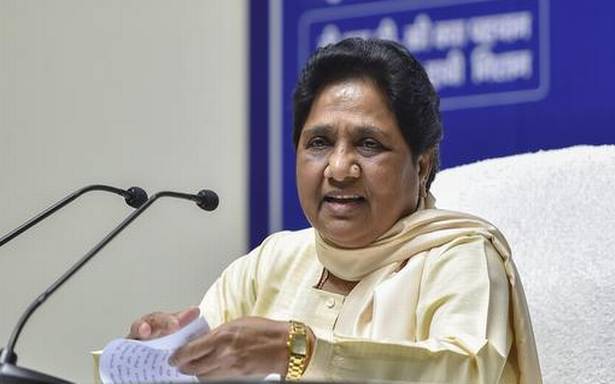 Ground Report | New Delhi: Why Mayawati is not active this time in elections; Mayawati came out with an explanation about absence in the election field stating that her party is financially unstable and they don’t have the required funds like other parties, amid this instability, if they hold rallies and conduct campaigns it will burden them unnecessarily, she also claimed that her party workers were active in the field ceaselessly before the election also they are helping the poor in the time of covid.

Bahujan Samaj Party was founded and led by Manyavar Kanshi Ram. Later, Mayawati became the successor and upheld the position in 2001. Present, M.P Satish Chandra and the party members clarified that Bahujan Samaj Party’s supremo and former Chief Minister Mayawati will not contest in the upcoming Uttar Pradesh elections. Mayawati had a lot of workload for the party after the death of BSP’s founder Manyavar Kanshi Ram.

Satish Chandra Misra said that he and former Chief Minister Mayawati will not contest in the upcoming state election which will be held in seven phases starting from February 10, 2022.

All the political leaders are trying their best in the campaigns for the Uttar Pradesh assembly election but, the Bahujan party’s chief Mayawati is missing in action as compared to the other parties like BJP, Samajwadi Party, and Congress.

Claims of other Parties

On December 30, 2021, while addressing Moradabad, Union Home minister Amit Shah said, “Sister, the election has come please come out for a bit otherwise don’t say later that you did not Campaign.”

Amit Shah is not the only one who is asking for Mayawati, the other party leaders are also questioning the absence of Mayawati from the poll Battleground.

Congress General Secretary, in charge of Uttar Pradesh, Priyanka Gandhi Vadra while addressing the media in Delhi on December 23 said “I cannot understand why Mayawati is so silent as she didn’t see her like this before.”

Samajwadi Party chief Akhilesh Yadav carried out public meetings since he launched his “Vijay Rath Yatra” from Ghazipur on November 17.  Congress leader Priyanka Gandhi Vadra is also leaving no stone unturned. The ruling party BJP meanwhile has also launched its “Jan Aashirwad Yatra.” With all efforts trying to win the trust of the people. But Bahujan Samaj Party is nowhere to be seen

On the birthday of her and khansi Ram, Mayawati held a  press conference and detailed the scenario. She explained the reason for not being active on the ground level because the founder of the BSP party’s death created a lot of work for her for maintaining party functions. She also said that she has some health issues so she can’t go outside on a regular basis.

She also mentioned that BSP will contest for all 403 seats alone in UP. Answer all the questions of the opposition put on her. She further mentioned that the cadres are working at ground level. She is aware of all the activities being carried out by the workers and has feedback with her regarding the tasks.

BSP candidates have been working silently on a ground level in Uttar Pradesh. The leaders are indulged in carrying out door-to-door campaigns and are organizing meetings in the residential areas of Dalits and Bahujans. All the work is being carried out under the “Bhaichara Committee” which also involves OBC representatives along with Brahmins and Dalits.