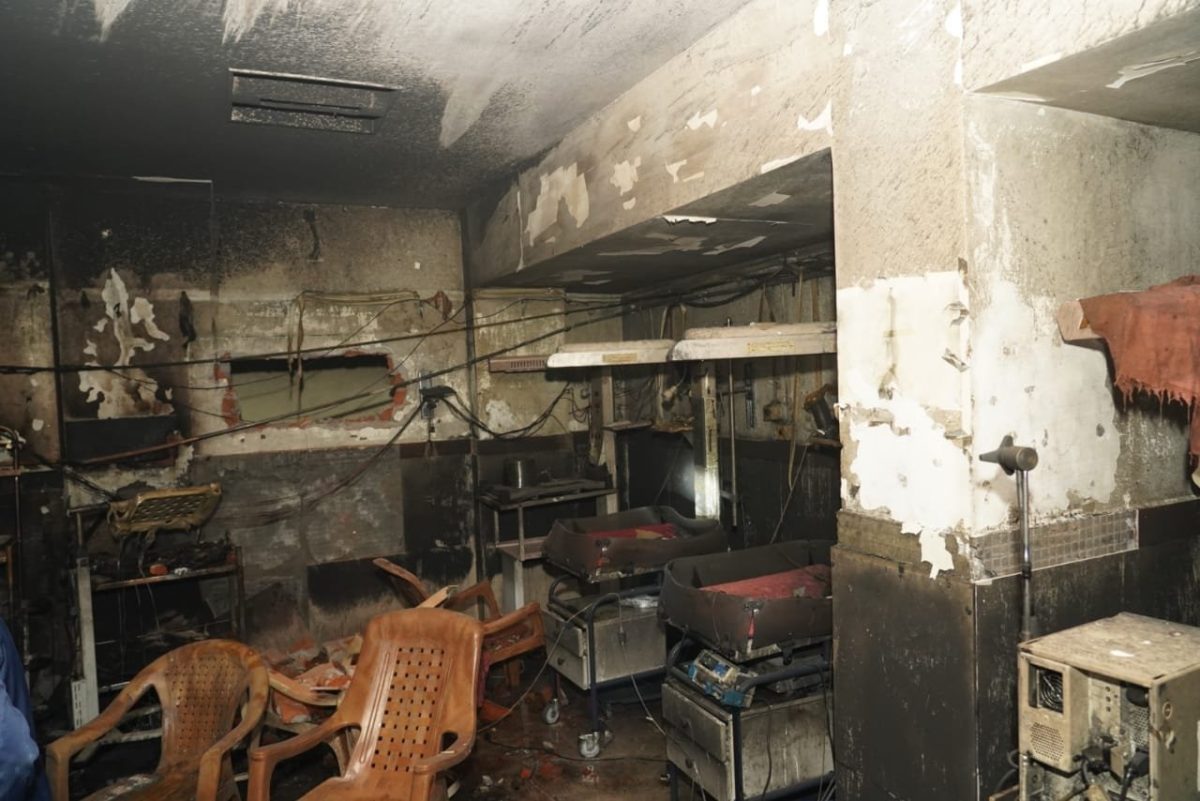 Ground Report | New Delhi: Bhopal Hospital fire tragedy; In a highly shocking and tragic incident, at least four infants were killed in a fire at the Special Newborn Care Unit (SNCU) of Kamala Nehru Children’s Hospital in Bhopal, Madhya Pradesh on Monday (November 8) night, prompting the government to was forced to Order a high-level inquiry into the incident.

Medical Education Minister Vishwas Sarang said a short circuit may have started the fire and described the situation inside the ward as “very scary”.

According to an official, the fire broke out on the third floor of the hospital, which houses the ICU. “Four children died in the fire that broke out in the Special Neonatal Care Unit (SNCU) ward due to a short circuit,” Sarang said. “As soon as we got information about the incident, we reached the spot along with others. It was dark inside the ward. We shifted the children to the adjoining ward,” he said.

A fire broke out on Monday at around 8.35 pm at the SNCU of the medical facility located on the premises of Gandhi Medical College and Hamidia Hospital, with the upper lake on one side and the state chief minister’s official residence on the other.

He said the worried parents were desperate to enter the ward to pick up and rescue their children, but the security staff stopped them from doing so. Soon after the fire broke out, thick smoke engulfed the ward and it was dark inside. Eyewitnesses said even a handy mobile phone flashlight did not do much in the low visibility there.

Doctors and nurses tried to shift the newborns to another ward. They managed to rescue all 40 children, but could not save the lives of four of them who were already in critical condition. Later, some parents also shifted their children from other wards to safer places.

Kamala Nehru Children’s Hospital is part of Hamidia Hospital, one of the largest government medical facilities in the state. Former Chief Minister and Leader of Opposition Kamal Nath termed the incident “very painful” and demanded strict action against those responsible. State BJP President Vishnu Dutt Sharma has also expressed grief over the incident by tweeting. He said that he is praying for the speedy recovery of the injured.

SDM Kshitij Sharma, CSP Nagendra Pateria, and officials of Koh-e-Fiza and Bagh Sewaniya police stations tried to convince the family but they kept demanding DNA tests and refused to sign the autopsy papers. They sat on dharna in the hospital.

ALSO READ: 50% of Covid deaths in Bhopal are Gas Survivors

“The family has refused to accept the body of the child. An autopsy will be done and samples will be sent for DNA testing to identify the biological parents. The body will be preserved till the procedure is completed,” said SHO Koh-e-Fiza Anil Bajpai. In the evening, the family agreed to sign the documents for the post-mortem and ended their protest.

Three top medical officers have been removed from their posts after the fire incident at Kamla Nehru Hospital in Bhopal. Dr Jitendra Shukla, Dean of Gandhi Medical College, Dr Lokendra Dave, Superintendent of Hamidia Hospital and Dr KK Dubey, Director of Kamala Nehru Hospital, have been removed from their posts, news agency ANI reported. Also, Awadhesh Bhadauria, a sub-engineer in the electricity wing, has been suspended.

The National Commission for Protection of Child Rights (NCPCR) has taken suo motu cognizance of the fire tragedy and issued notice to the state chief secretary on Tuesday. NCPCR in its notice has asked the Chief Secretary to submit the preliminary action taken report within three days. The panel has also demanded adequate compensation to the families of the dead babies.