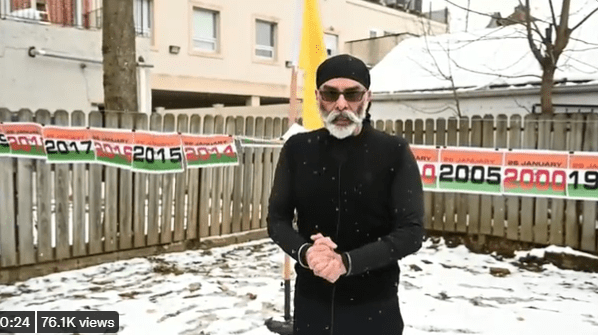 Ground Report | New Delhi: Gurpatwant Singh Pannu; Gurpatwant Singh Pannu, the leader of the Sikhs For Justice terror group, has posted another incendiary video focusing on the Republic Day celebrations in India, calling on his supporters to “block” Prime Minister Narendra Modi and withdraw the tricolor of the national capital on January 26.

In a viral video shared by SFJ chief Gurpatwant Singh Pannu, the banned outfit has announced $1 Million dollars as a ‘reward’ to anyone who would raise Khalistani flags instead of the Indian tricolour in Delhi on Republic Day.

“This is the matter of Sikhs and Hind. This time the tricolour will not be allowed anywhere in Delhi. The campaign to liberate Punjab from Indian occupation through ‘Khalistani Referendum’ will continue equal to 2022 Vidhan Sabha elections,” Pannu was heard saying in the video shared today. He also appeared to burn Indian flags in the video.

Who is Gurpatwant Singh Pannu

Gurpatwant Singh Pannu, founder of the banned pro-Khalistan group Sikhs for Justice. On July 1, 2020, he was declared an “individual terrorist” under the UAPA for promoting secessionism and allegedly encouraging young Punjabi Sikhs to take up arms.

In October 2020, just a week before the anniversary of the death of former Prime Minister Indira Gandhi, Pannu released a video message through his television channel urging Indian students to raise slogans in favor of Khalistán and to raise the Khalistán’s flag in exchange for an iPhone 12 Mini with pre-installed Punjab referendum apps and VPN to securely connect to SJF’s voter registration database bypassing the Interior Ministry’s ban.

In 2020, the Indian government seized Pannun’s properties under section 51A of the Illegal Activities (Prevention) Act (UAPA). Following the infamous flag-raising incident on Indian Republic Day, India’s National Investigation Agency (NIA) filed a charge sheet against six individuals, including Pannun, under various sections. of the IPC and the UAPA law. He has alleged that Pannun financed the incident and illegally sent money to fuel riots on Indian Republic Day in 2021.