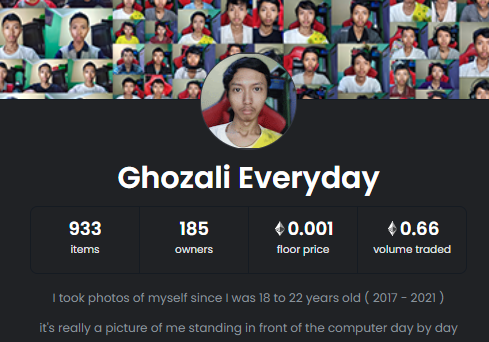 Ground Report | New Delhi: Who is Ghozali Who earned $1 million; A 22-year-old became a trend this week, after generating a wave of people interested in buying his selfies in the form of non-fungible tokens (NFT).

Ghozali, who is a computer science college student from Indonesia, took a selfie every day from the age of 18 to his current 22 years . The objective of this personal project was to make a video that collected all the photos to remember his growth. Although the idea changed a bit when he decided to sell them as NFTs on the OpenSea platform.

Ghozali, who goes by @Ghozali_Ghozalu on the NFT trading platform OpenSea, took selfies “standing in front of the computer day by day” for five years starting in 2017.

In recent days, a mind-boggling number of those selfies have been sold as NFTs in the “Ghozali Everyday” collection on OpenSea. To purchase a Ghozali selfie as an exclusive digital asset, you would need to spend at least 0.345 of the Ethereum (ETH) cryptocurrency, which is equivalent to US$1,155.

As of the publication of this article, hundreds of Ghozali selfies have been purchased and are in commercial circulation, with total trading volume reaching the equivalent of 293 Ethereum coins, or $986,485.

In case he’s thinking of NFTs for his selfies, it’s important to note that Ghozali basically caught lightning in a bottle here.

Through his Twitter posts, it is evident that Ghozali never expected his selfies to be worth a million dollars. In a tweet, he said that before he coined his selfies as NFT, his original intention was to use the photos to edit this video:

After meeting his expectations, Ghozali’s NFTs exploded as some distinguished members of Crypto Twitter confirmed their support by buying and advertising the options. Along with Ghozali’s selfies, his reputation is increasing, and because of this, one of his NFTs was offered for 0.247 Ether on January 14 (approximately $806). Along with the selfies of him, he would also detail the situation or scenario at the time, which adds to the weirdness of the NFT. (Who is Ghozali Who earned $1 million)

Ghozali started taking selfies in 2017 when he was just 18 years old, and continued until 2021, when he was 22. A total of 933 photos were compiled over five years. After making a photo roundup video for five years, Ghozali had the idea to sell each image. Sold an NFT-formatted selfie on OpenSea on Jan 10, 2022. The price ranges from Rp 47,000 to the most expensive Rp 3.1 billion.