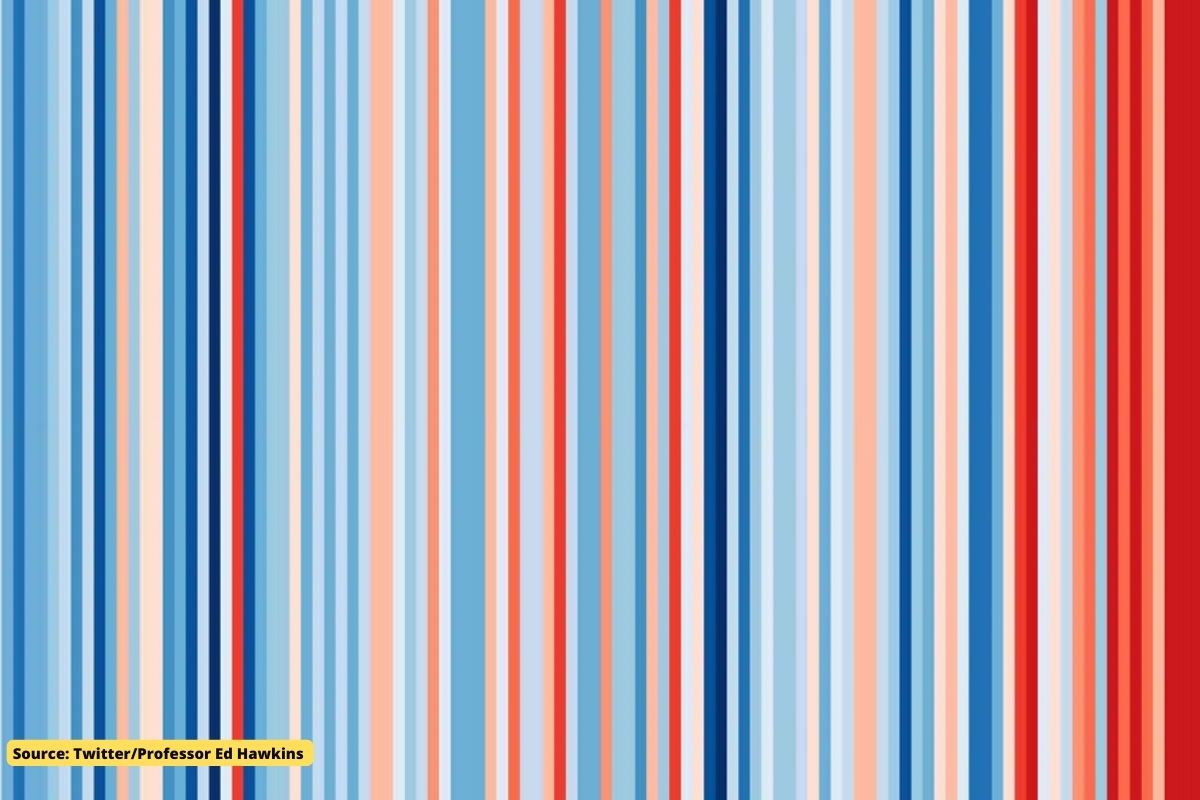 As extreme drought grips across the counrty and more intense storms brew in the tropics, climate-conscious people joined in a campaign that aims to lead the world’s attention to the climate crisis. The campaign under the hashtag #ShowYourStripes, which can be translated as “show your stripes”, is a visual proposal that is designed to illustrate something inherently difficult to portray: how much the Earth’s temperature has increased.

A climatologist at the University of Reading has designed images for each region or country, and the bands in the images change from blue to red in recent years, illustrating the average annual increase in temperature.

The graphics have been designed to be as simple as possible, in order to start conversations about the climate crisis, rather than overloading viewers with confusing information.

In a tweet, Professor Hawkins shared the world’s stripes for the period of 1850-2020 and said: “The planet is warming due to human activities, primarily burning fossil fuels & deforestation. “Climate change is happening here & now, and is already affecting everyone. The consequences will get worse for each bit of further warming.”

In another tweet, Professor Hawkins “Next Tuesday (21st June) is #ShowYourStripes day! We encourage people to use the warming stripes in creative ways to start conversations about climate change”.

“Graphics can help start local conversations about the growing risks of climate change wherever you live and the actions needed to avoid the worst consequences.”

The campaign is run in conjunction with Climate Central, an independent organization of leading scientists and journalists who research and report the facts about our changing climate and its impact on the public, and is supported by television weather presenters from around the world. world.

What is ShowYourStripes Campaign

The Show Your Stripes campaign is a collaborative effort with Climate Central, an independent organization of climate scientists and journalists who research and report on how the climate is changing and the impact these changes have on the public.

Weather presenters and the general public are invited to participate in the campaign by downloading the “Warm Stripes” for their country or region and posting them on social media using the hashtags #ShowYourStripes and #COP26. Out-of-the-box graphics have also been created for Facebook, Twitter, and LinkedIn.

The “Warming Stripes” charts are visual representations of temperature changes since the early 20th century. Each band represents the average annual temperature in a given country, region or body of water.

Data is available for most countries since 1901, and even earlier for the oceans, the UK, the US, Switzerland, Germany, and the cities of Stockholm and Vienna. The data comes from the Berkeley Earth temperature dataset, the UK Met Office HadCRUT5.0 dataset, and the national weather agencies of some countries.

The graphics have been designed to be as simple as possible, in order to spark conversations about the climate crisis, rather than overloading viewers with complex data and jargon.