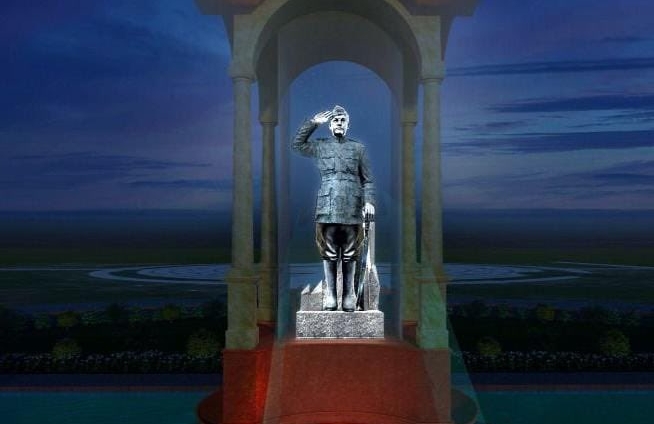 Ground Report| Statue of Netaji Subhash Chandra Bose illuminated in the form of a hologram, on Sunday 23 January in New Delhi. Bose, one of the figures of the struggle for the independence of India. He allied with the Axis against the United Kingdom during World War II. let’s understand what Hologram statue is, and how this works?

A contemporary of Mahatma Gandhi, Subhas Chandra Bose opted for armed resistance, judging peaceful resistance insufficient, and approached Hitler’s Germany and the Empire of Japan in the name of his anti-colonial ideals.

This Sunday, while presiding over the inauguration ceremony, Prime Minister Narendra Modi praised a “great hero of Indian independence”.

The hologram is located near the India Gate, a war memorial in New Delhi, designed by the colonial authorities. It was opened on January 23, 1897 to commemorate 125 years of Bose’s birth. It will remain illuminated until an idol is made.

Imprisoned several times by the British, Bose managed to get him out to travel to Germany in 1941, before moving to Japan in 1941. He won the support of Indians living in Southeast Asia and formed a rebel Indian army.

He is believed to have died in a plane crash in Taiwan in 1945. However, many Indians rejected this death and there are currently several theories, such as that he voluntarily hid at the end of the war so that the British could not judge him or that the Soviets were captured and sent to a Gulag.

Holography is a technique that uses a projector to create a virtual three-dimensional image. A holographic medium, for example an object produced by the holographic process (which may be referred to as a hologram), is usually viewed under indistinct ambient light.

A hologram simply depicts an image in such a way that it appears realistic and visible from all sides. If you look at the image some distance away you will feel as if the idol is there, although it is being shown through rays. In addition, the quality of the holographic screen also matters to give the impression that the 3D image is natural and not generated from the screen.

The hologram is a fixed image which is inscribed in relief on a support, using a laser beam split in two by a separation glass. One of the parts of the beam aims at the object to be holography, while the other part of the ray aims at the photographic plate on which the image of the object will be inscribed. It is the interference between the waves reflected by the object and the laser beam which gives the light amplitude and makes it possible to register a relief image on the plate.

A pane of glass was placed at an angle in front of the stage and made it possible to reflect a hidden room in which the phantom actor moved. Thanks to the association of the reflection and the transparency of the glass, the spectator could see the ghost being highlighted on the stage, like an apparition.

The hologram statue of Netaji is powered by a 4K projector capable of delivering brightness levels of 30,000 lumens. These projectors are expensive and usually cost upwards of Rs 15 lakh for one unit with a maximum projection capacity of around 13×13 feet. The size of the hologram statue is 28 feet in height and 6 feet in width.

How to create your hologram with your smartphone at home?

You may be surprised that it is quite easy to make a simple hologram at home using your smartphone and some common household materials. In fact, making holograms at home used to be one of the most popular topics for making YouTube tech videos about five or six years ago.

Technology continues to advance and research goes with it. What a few years ago we thought was pure science fiction is now part of our daily lives and is far from over. The hologram of the future still holds many surprises for us and progress does not stop.

The hologram of the future

Holograms are undoubtedly a resource of great interest for the technology of the future. The evolution of the main components and tools favors its inclusion in the most domestic environment. In fact, real-time holographic calls with a 5G connection are just a matter of time, as is the absolute three-dimensional television. The first tests in this regard are already underway with incredible results.

Soon, we will have autonomous holographic computers, in the form of helmets that superimpose virtual images on those of the real world. It will also be possible to touch a hologram thanks to Aerial 3D technology, to have holographic smartphones. These will make it possible to broadcast 3D images thanks to a specific backlight.

As you will have easily understood, although based on a relatively old process and technology, holography has won its letters of nobility thanks to numerous innovations enabling it to respond to the problems of many sectors of activity. We must therefore expect in the future to come across more and more holograms in our daily lives.