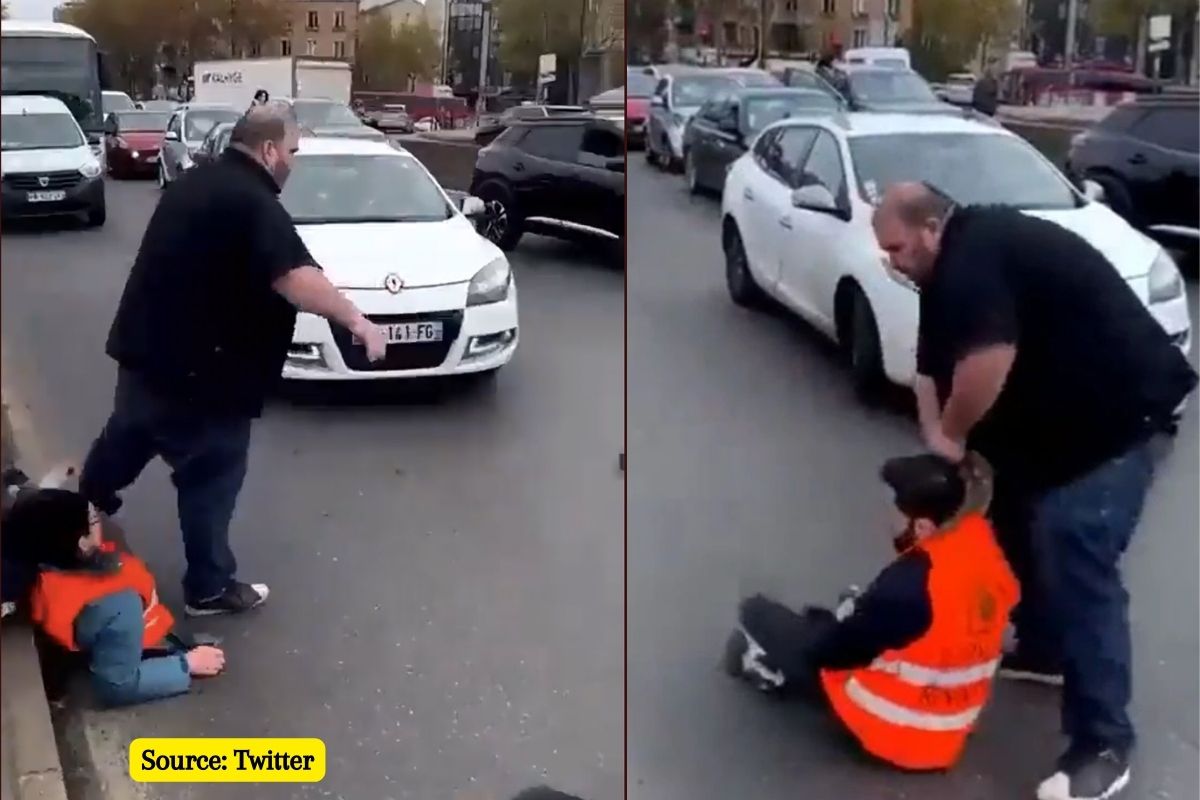 A demonstration by the Last Renovation environmental movement, which blocked roads in Paris, causing heavy traffic jams during rush hour, turned into a confrontation with motorists when they got out of their vehicles to clear the road for themselves.

The video shows how, initially, a group of protesters wearing reflective vests, similar to those used in civil works, were sitting on a public road holding a series of signs and blocking traffic in a vehicular corridor in France, without specifying the place or city.

A video recorded by one of the attendees at the protest event shows how a robust man addresses the protesters who remained sitting on the ground and, after snatching some banners carried by them and seeing that the protesters did not resist, but remained seated on the road, use their force against them.

Although the man does not punch or kick them, he does make an obvious display of force by lifting the “human obstacles” from the road to arrange them on the sides of the road.

Footage posted on social media shows some people dragging on the ground and beating protesters, before the police arrived on the scene, half an hour after the start of the demonstration, putting an end to collective action. The activists said they wanted to be part of the context of “social discontent” and multiply actions of civil disobedience in the coming weeks.

In another video viral on social media, A Angry driver was caught on film dragging a protester off the road. A user wrote “When the police won’t arrest climate narcissists for breaking laws, people will take matters into their own hands, a dangerous situation”.

The protest was part of a series of traffic blockades in different parts of Paris, over the past week. In a press release, “Last Generation” warned that other similar operations could be held in other German cities throughout the day.

The aim of the “civil disobedience” action on the motorway is to “force the government to adopt an ambitious plan for the thermal renovation of buildings by 2040, the first step towards a significant reduction in France’s carbon emissions”, according to a press release from the collective.

The Last Renovation collective claimed on Twitter this action of “civil resistance” attributed to “Victor, 25, committed citizen” who wanted to “alert on the danger of climate change”.

The collective has already carried out several actions of disobedience since the spring of 2022, during the Roland-Garros tennis tournament then by interrupting the Tour de France and blocking the Paris ring road.

However, the outcome of the struggle for public space between protesters and drivers could not be known, while there for the recording of the video that is spread through social networks.

Through social networks, the event aroused controversy, because although some question the violent nature that the drivers themselves resorted to clear the road, other Internet users support the action, warning that these protests have no basis since they do not affect those who make the decisions, but to ordinary citizens, who are the real losers of some protests that do not manage to have the desired echo and that, by affecting other citizens, the only thing they achieve is to lose the legitimacy of their causes.

Follow Ground Report for Climate Change and Under-Reported issues in India. Connect with us on