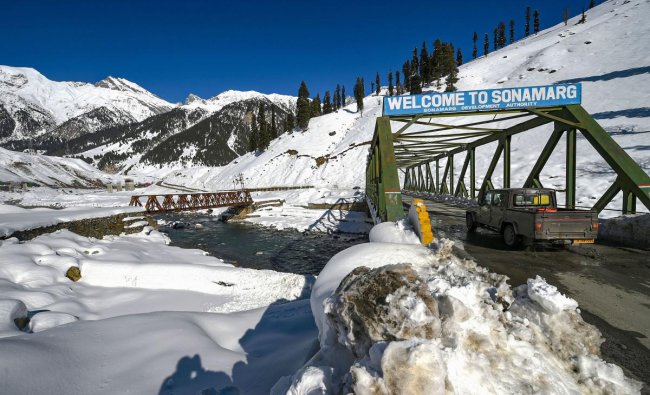 Ground Report | New Delhi: Vaccine workers trek mountains; A strong wind was blowing on a cold morning in January 2022. Snow scattered on the ground was blowing into the air with strong gusts. Even in this severe cold, the young health worker Masrat Farid deposited the bag on her. She is part of a team of health workers running a door-to-door campaign in the region to administer vaccinations to teenagers and boosters to older people in remote mountain villages.

Gagangir is a small town in Kashmir nestled among the forests. Hereafter the snowfall, the snow piled up to the knee. Making her way through this snow, Masrat said: “We have to fight the infection. We have to keep going, keep going.”

Last year, Masrat and her colleagues vaccinated thousands of people. Her vaccination campaign is mainly concentrated in the villages. Masrat and her fellow health workers have to travel difficult roads to reach these remote villages. You have to take long walks.

Bone-shattering cold, snowfall, and rough roads aren’t her only challenges. A major challenge is that many people still refuse to be vaccinated. More difficult than facing the winters of the Himalayas is to clear the doubts of these people and gain their trust.

“Most young girls are apprehensive. Due to misinformation and lack of trust, they don’t want to get vaccinated,” Masrat told AP during a recent vaccination drive in a snow-covered village.

There are many rumors related to vaccinations in these remote areas. According to a rumour, getting vaccinated not only affects a woman’s ability to have children, but because of the vaccine, pregnancy may not occur. Masrat says: “We are not only vaccinating them to protect them from the Covid. We also need to give them the correct information about vaccinations. They need to be aware so that we can earn their trust.”

As part of the new vaccination campaign that began this month, health workers are already vaccinating boys and girls between the ages of 15 and 18. Along with this, reinforcements are also being given to people over 60 with health problems.

Health officials said that the booster dose should be given as a precaution. People who are in the risk category for health reasons were vaccinated in the initial phase of the vaccination campaign that began in 2021. The immunity created by the vaccine may now weaken in them. Precautionary reinforcements are being installed for those people.

Jaffar Ali is a health officer. He says the biggest challenge ahead of this year’s vaccination campaign is bad weather. The situation is different from last year. During the 2021 vaccination campaign, some of Zafar Ali’s colleagues were harassed by the local population.

At that time many people thought that vaccination caused impotence. It was also rumored that the vaccine could have very serious side effects. Even life can be lost. Due to these rumors, many health workers had to suffer a lot. According to government data, health workers have so far administered both doses of the vaccine to more than 72 percent of the population.

Recently, health officials also reached out to some of these high-altitude towns, which had lost contact with nearby towns due to heavy snowfall. The officers reached these villages on foot and vaccinated the people. One of them is a village, Khag. Most of the residents here are from tribes. They live in houses made of mud, stone, and wood. The team went from house to house and vaccinated people.