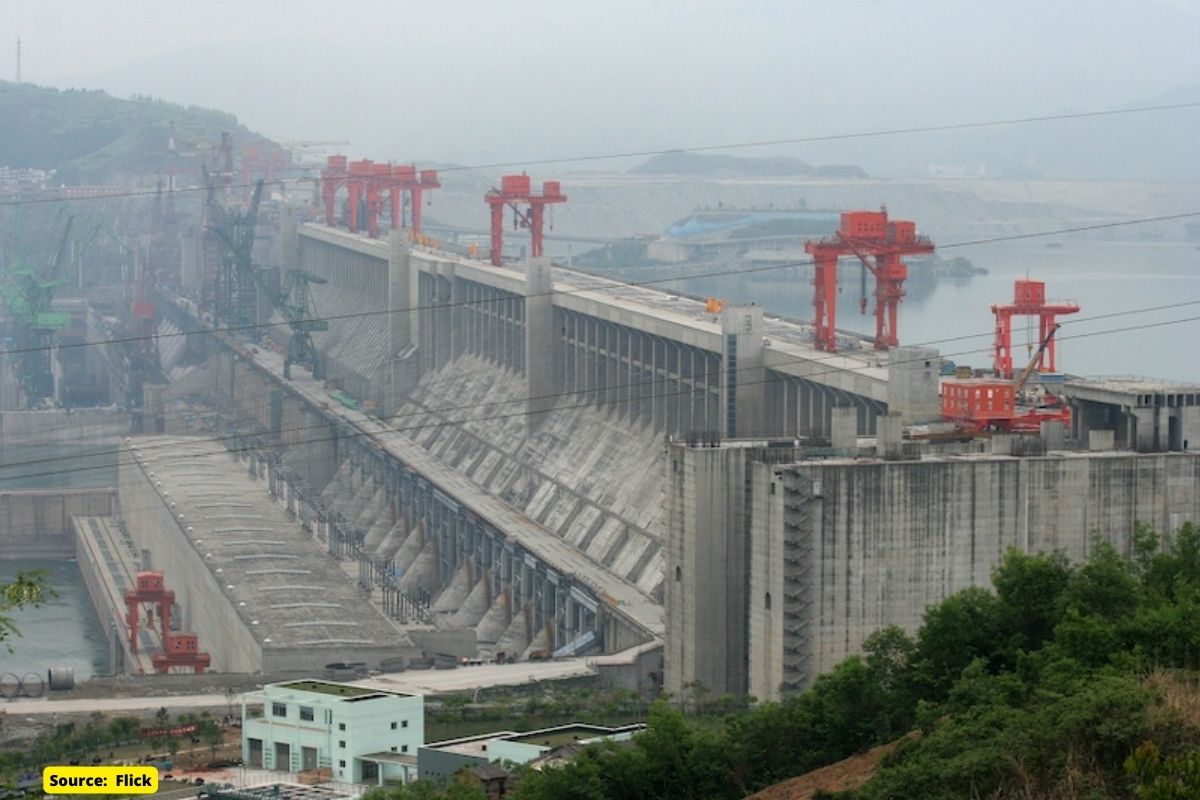 Twelve years ago, China completed the commissioning of the largest, most expensive, most powerful and most controversial dam in the world, the Three Gorges Dam. The figures make you dizzy: 185 meters high, more than 2 km long, 27 million cubic meters of concrete poured into a building that will have cost the record sum of 23 billion euros… But this site of excess caused a series of environmental and human disasters.

A symbol of China’s economic growth, the Three Gorges Dam worries about its likely human and environmental consequences.

The Three Gorges Dam has raised questions and protests from environmentalists since its construction. The consequences of the establishment of this dam on the ecosystem and the Chinese landscape are numerous.

Because of the dam, the landscape around the Yangtze River has changed. Upstream, it is estimated that 600 km² of forests and agricultural land have been flooded by the waters of the river. Downstream, there is a significant drop in the water level.

When they launched work on the Three Gorges Dam in 1994, Communist Party cadres made the dream of Sun Yat-Sen, the father of the Chinese revolution, a reality, who had imagined such a project in 1919. More than 70 years later, the project has finally been completed and the objectives are numerous: first, to improve maritime transport on the Yangtze River in central China, which is less economically developed than the east coast of the country.

Then, the authorities hope to take advantage of the dam to fight against the floods of the “Blue River”, which are often deadly and costly. Finally, and above all, Beijing wants to produce large quantities of hydroelectric energy to initiate the shift towards a greener China, less dependent on coal-fired power plants.

Changes made by humans to the landscape have an impact on the ecosystem. The Three Gorges Dam, for example, contributed to the extinction of China’s dolphins. The drying up downstream of the river leads to the drying up of the lakes and impoverishes biodiversity, this phenomenon mainly threatens migratory birds.

In addition to this questioning on the transfer of water, the development of the Three Gorges raises a wide controversy on its impacts. In the 1980s, the Academy of Sciences in Beijing carried out an environmental analysis unfavourable to the dam, whose international protest retained two arguments: the relocation of people and damage to the environment. The government responded to the first by asserting the protection of property and people downstream that the dam would allow, which the West had to admit.

The first dreaded environmental damage would result from sedimentation in the reservoir. Although the evacuation of sediments is provided by a lowering of the reservoir during the monsoon, sedimentation would be unavoidable during the highest floods. Eventually, it would increase the flood level in Chongqing and hamper boat traffic. In theory, proper management of the reservoir, which involves storing clear water and draining turbid water, would conserve 90 per cent of the lake’s volume in the next 100 years. But opponents point out that the efficiency of the flow of water during floods will be limited due to the large size of the reservoir, responsible for a strong slowdown in water, and estimate that ten cubic kilometers of capacity will be lost in 50 years before a balance is established.

Another concern is related to seismic risk. Records not exceeding 6 on the Richter scale, it can be assumed that future earthquakes will remain within the regional norm. But we do not know the effects produced by the impoundment of the reservoir.

Another fear: landslides in the reservoir. According to the historical archives, these phenomena are recurrent in the gorges and sometimes have dramatic consequences: a landslide that occurred in the year 1030 blocked navigation for 21 years; another, in 1542, for 82 years. In 1985, a landslide caused a 36-meter wave and wiped a small town off the map. The impoundment of the reservoir, its seasonal level fluctuations, ongoing road works and the clearing of new land on steep slopes increase the risk, which recent events have confirmed. In total, several roads and new towns would be threatened.

Fan Xiao, a geologist with the Bureau of Geological Exploration and Exploitation of Mineral Resources in Sichuan province, near several tributaries of the Yangtze, says the landslides are directly related to the filling of the reservoir.

Also Read:  One 100 million people are displaced in the world; what you need to know

The water first seeps into the loose soil at the base of the area’s rocky cliffs, destabilizing the land and making it prone to landslides. Then the water level of the reservoir fluctuates: engineers partially drain the reservoir in summer to accommodate floodwaters and raise it again at the end of the flood season to generate power, and the abrupt change in water pressure disturbs even the land.

In a study published in the Chinese journal Tropical Geography in 2003, academics at South China Normal University in Guangzhou predicted that such changes in water level could trigger activity in 283 landslide-prone areas.

One of the biggest fears is that the dam could trigger violent earthquakes, as the reservoir rests on two major faults: the Jiuwanxi and the Zigui-Badong. According to Fan, changing the water level makes them tired. “When you change the mechanical state of the fault line,” he says, “it can cause fault activity to increase and cause earthquakes.”

The weight and pressure of water accumulated upstream of the Three Gorges Dam cause landslides and cause earthquakes. Downstream, the decrease in the water level causes numerous droughts. Another consequence is the rise of saltwater in the river delta.

Natural disasters. The accumulation of too much water in the reservoir, 660 km long and with a capacity of 39 billion cubic meters, increases the risk of landslides and earthquakes, according to geologists. In its statement, the Chinese government acknowledged that the creation of the reservoir has increased the frequency of earthquakes, while denying, however, any link with the powerful earthquake which killed 87,000 people in the Sichuan region, in the northeast of the country, on May 12, 2008.

Displacement due to Three Gorges Dam

The dam is also wreaking havoc on China’s animals and plants. The nation, which spans 3.7 million square miles (9.6 million square kilometers), is home to 10% of the world’s vascular plants (those with stems, roots and leaves) and biologists estimate that half of China’s animal and plant species, including the beloved giant panda and the Chinese sturgeon, are found nowhere else in the world.

The Three Gorges region alone accounts for 20% of Chinese seed plants or more than 6,000 species. Shennongjia, a nature reserve near the dam in Hubei province, is so undisturbed that it’s famous for its sightings of yeren, or “wild man” – the Chinese equivalent of “Big Foot” as well as the only white monkey a little more prosaic.

In reality, the relocation affected between 1.25 and 2 million people, and more than 2,500 plant species and 330 fish species are threatened by the loss of their living space. To this are added 22 species of animals that, in addition, already appear on the red list of animals in danger of extinction. In addition, rising flood levels due to sedimentation and landslides will further require the relocation of tens of thousands of people. Not to mention that there will be a great temptation, during the rainy season, to keep the reservoir level high in order to exploit the energy to the maximum, to the detriment of local residents.