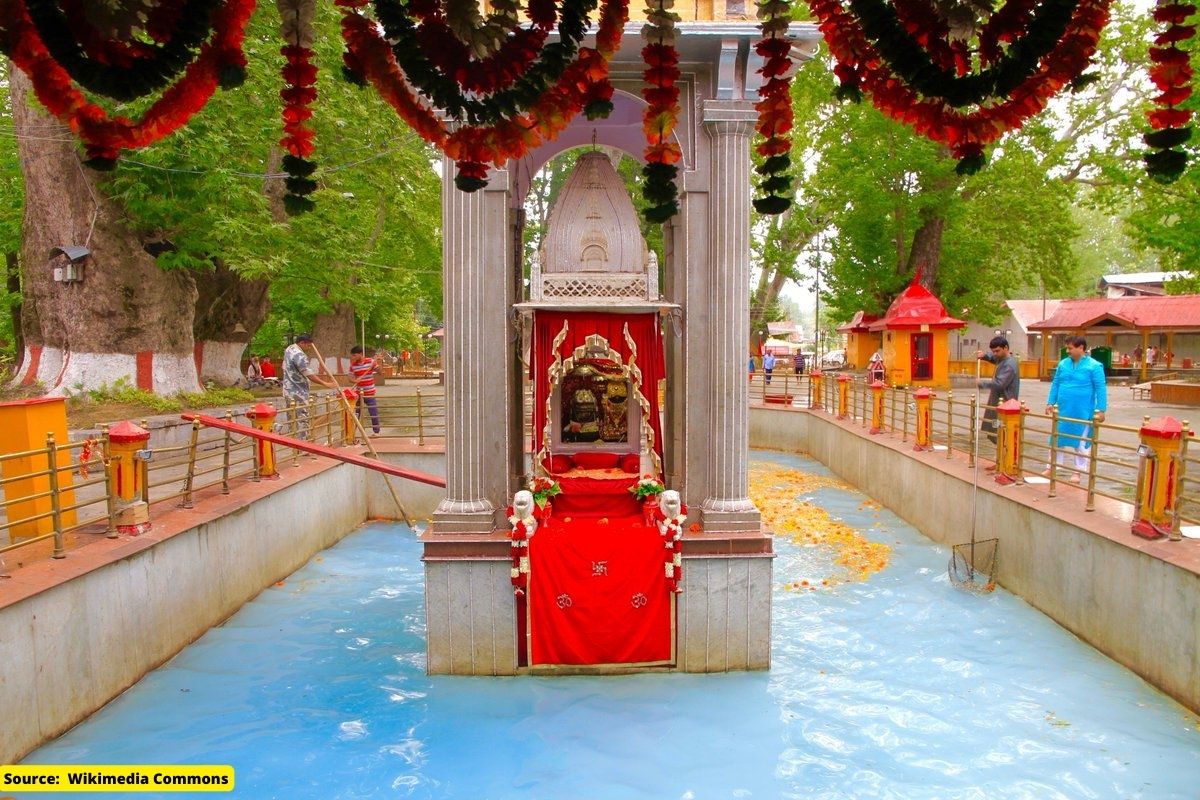 The devotees offered prayers and sang hymns in praise of the goddess at the temple situated among majestic chinar trees. Thousands of Kashmiri Pandits who started arriving since Tuesday, paid obeisance.

The government had operated special buses to bring the migrant Pandits from Delhi and Jammu to Tulmulla. However, most of them had used their own or private transport.

Organizations like Jammu and Kashmir Bank, J&K Women’s Helpline, People’s Welfare Society Ganderbal, and others set up stalls providing food and refreshments to the devotees, while Health Department had posted doctors and paramedical staff there.

District administration and police had made security arrangements to secure the passage of the devotees to the temple.

Scores of police and paramilitary CRPF personnel lined the route from Ganderbal town to Tulmulla area.

The devotees, including women, children and elderly persons, some of them participating in the Mela for the first time since their migration in early 90s from here, expressed happiness.

The fair has become a symbol of communal harmony as local Muslims make all the arrangements for the devotees. They set up stalls for flowers, prasad, sweets, and other eatables that the devotees offer and take as holy gifts.

“We are waiting for this festival for entire year as it gives us pleasure to be part of the mela which is real Kashmiriyat,” a flower seller at the fair said.

“Our festival is incomplete without the participation of local Muslims who set an example of brotherhood and amity in Kashmir,” said Mohan Lal, a Pandit who has migrated outside Kashmir.
“We are thankful to Muslims in Tulmulla who have welcomed us with open arms,” he added.

Rajinder Jatta told Groundreport.in, 65, a migrant Kashmiri Pandit has come from Faridabad. He spent the night at the Kheer Bhawani temple.

“We lived in Jawahar Nagar area of Srinagar city before migrating to Faridabad in 1989. I worked for the Archaeological Survey of India.
“Besides, our family had a shop called ‘Jatta and Company’ in Budshah Chowk. Our family traded in silk garments.” He said he has prayed for peace and development in Kashmir.

Also Read:  Who is Basant Rath and Why he wants to join politics?

“We must be able to return to our native places where we can live alongside our Muslim neighbours without any government security. I have prayed for the return of those glorious days when Muslim friends ate in my home and I dined at theirs,” Jatta added.

Another migrant Pandit, Ravinder Bhat speaking to Groundreport.in, 60, said he lived in the old city Sathu Barbarshah locality before migration.

“Our children living outside and the children of our Muslim friends and neighbours living in the Valley cannot imagine the traditional brotherhood Pandits and Muslims had in Kashmir.

“It is heartening to see Muslims, who are serving eatables and other materials for puja to us. We don’t see any change except concrete building everywhere, including in paddy and saffron fields besides in orchards,” said Rani Devi a Kashmir Pandit who visits the temple every year.

“We have come to attend the mela because we want to keep in touch with our roots and traditions,” another visitor S K Warikoo said.
Asked about the proposed resettlement of migrated Pandits in separate townships, Warikoo said government sometimes talks about separate colonies and sometimes says “we” will be settled at our ancestral places.

“These are all political talks because whosoever heads the government, Pandit community is only used as a political tool and nobody wants to address our problems.”

The fair culminated in the evening with Maha Aarti of goddess.