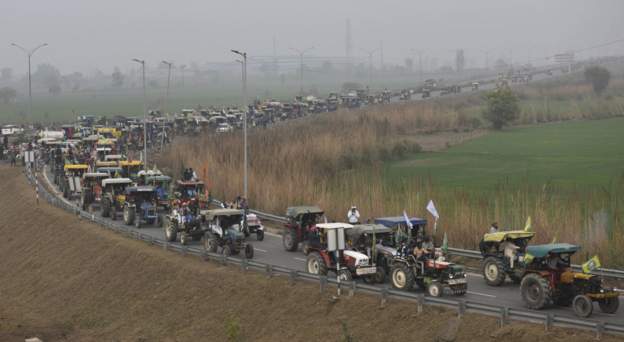 Farmers participating in the tractor rally on the expressway around Delhi said that it was just rehearsal for the parade on Republic Day.

The tractor march started from four different places at 11 am on Thursday and all the farmer groups returned to the starting point at four o’clock.

According to the United Farmers Front, more than five thousand tractors were involved in this march. Many protesters took part in the rally along with the bus and their personal vehicles. However, a fifth group Rivasan did not participate in it because their leaders were taken into custody by the Haryana Police.

Rakesh Tikait, spokesperson of Bharatiya Kisan Union-Tikait, said, “It was just the trailer, the whole picture will be shown on Republic Day.” He led hundreds of tractors from Ghazipur on the Delhi-UP border.

ALSO READ: Protest of farmers on Delhi’s borders amid rain and cold

He said that the government can test the farmers as much as they want, but the farmers will not go home without returning the disputed laws.

Several rounds of talks between the farmers have yielded no progress. The next round of talks will take place on Friday.Braving severe cold and sporadic rains, thousands of farmers from Punjab, Haryana and some other parts of the country have been camping at several Delhi border points for over 40 days, demanding repeal of farm laws, a legal guarantee on minimum support price for their crops and other two issues.

The seventh round of talks between protesting unions and three central ministers ended inconclusively on Monday as farmer groups stuck to their demand for the repeal of three laws, while the government listed out various benefits of the new acts for the growth of the country’s agriculture sector.