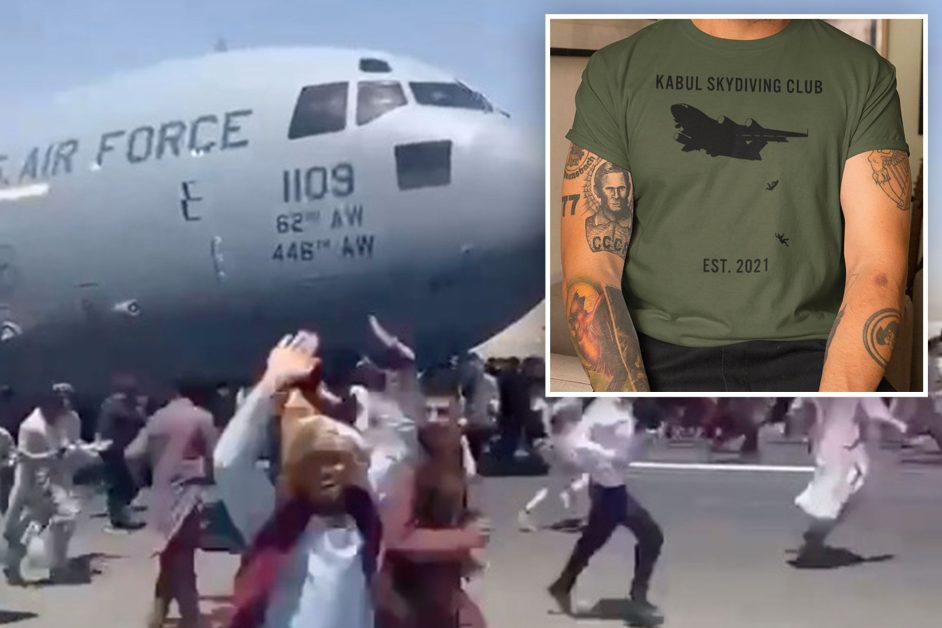 Ground Report | New Delhi: T-shirts of Afghans falling; An offensive T-shirt that appears to mock the deaths of people killed by a US military plane in Afghanistan this week is being sold online on several e-commerce platforms.

There was chaos at Kabul airport on Monday as thousands of people crowded the runway and attempted to board military planes that were evacuating civilians and their allies from Western countries, including the US. At least seven people were killed in the chaos that broke out a day after the Taliban seized the national capital, Kabul and the Rashtrapati Bhavan.

The desperation of people gathered at the airport to leave Afghanistan culminated in scenes of people chasing planes as they walked down the runway, and videos showed some people climbing and clinging to the wheels of a flying jet.

Some e-commerce websites have since started selling several T-shirt designs referencing the horrific incident, and they have faced almost immediate backlash. One of the designs featured an aircraft similar to a C-17 and two people in free fall, with the words “Kabul Skydiving Club” EST. 2021” printed with the image.

Social media users drew attention to the offensive T-shirt designs and sale listings on Twitter. While many were hosted by relatively specialized e-commerce sites, one was being sold through a link on the popular US shopping website Etsy, which serves as a platform for independent sellers to run their own shops.

“As Afghans are fleeing and clinging to planes out of desperation, someone decided to capitalise on their pain and misery with this repulsive T-shirt,” Holly Dagres, a senior fellow at the Atlantic Council think tank, said in a tweet.

ALSO READ: Afghan footballer among those killed in US plane crash in Kabul