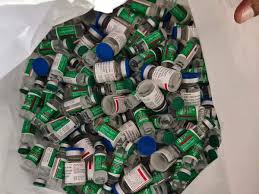 A thief stole the COVID-19 vaccine from the hospital at around 12pm on Wednesday night, but the thief returned the vaccine the next day to a tea shop outside the Civil Lines police station on Thursday.

The thief returned the vaccines and left a note, saying the contents of the bag was not known while it was being stolen. The cost of the stolen vaccine dose was stated to be around Rs 2.5 lakh.

A masked young man rode a motorcycle on a kiosk outside the police station and wrapped it in a cloth and left it stating that it contained a scribe bread.

A slip was also found in the cloth, on which it was written, ‘Sorry I did not know that Corona is a medicine’. Now the Civil Line Police Station is busy trying to find clues of the youth through CCTV footage.

“Sorry, I didn’t know it was medicines for corona,” the thief wrote in Hindi in the note that was attached to the bag full of Covishield and Covaxin doses.

However, no clue has yet been found of the missing files from the PP Center.

It is worth mentioning that 1710 doses of corona left from various vaccination camps were kept in the fridge there in the general hospital’s PP center on Wednesday evening.

At midnight, two thieves broke the center’s locks and stole the vaccine. Along with the vaccine, the thieves also stole the inquiry files kept in the other room.

The theft incident was discovered on Thursday morning when staff arrived at the PP Center. This incident of theft was captured in CCTV cameras.

Surprisingly, there is also a store of medicines in the PP center. No drugs disappeared from the store. Apart from this, cash of Rs 50,000 kept in PP center was also not unleashed.

The Chief Medical Officer, Dr. Manjeet Singh said that the stolen vaccine has 1270 covicshields and 440 covaciens.

He said that the vaccine deteriorates after the breakdown of the temperature. At present, orders have been ordered to investigate the matter.

DIG OP Narwal, along with CM Flying DSP Ravindra Amale, reached the spot and took stock of the situation as soon as the incident of vaccine theft was reported.

Narwal said that the theft incident has been carried out by some knowledgeable person. CCTV footage has been captured. The case is being seriously investigated.

However, the thieves are not getting relief even after returning the stolen goods. Police are trying to identify the thieves by examining the CCTV footage of the tea shop area.