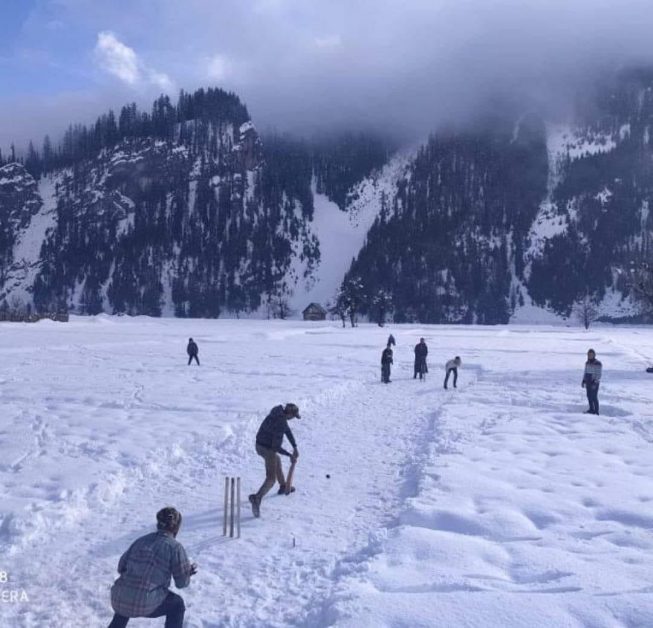 Ground Report | New Delhi: Snow cricket in Kashmir; After witnessing a heavy tourist influx in the summer for the first time, Gurez Valley in north Kashmir’s Bandipora district is once again attracting people from outside Jammu and Kashmir as some video clips have gone viral on social media platforms, showing youth in the area. can be seen playing cricket on the ice.

Cricket on the frozen grounds over the years has become popular among the residents of Gurez as the place has the potential to become a hotbed of winter sports. The people of Gurez say that when various winter sports events take place in other parts of the valley, why can’t similar games be organized in Gurez in the winter months. If the administration wants, he will remain the center of attraction even in winter.

Local sportsperson Gulzar said, “Winter sports have been organized here, many youths have participated in it because Gurez has the potential for winter sports, I want the J&K tourism department to organize such tournaments every year so that Gurez continues to be an attraction for tourists as well in winters.”

The main objective behind organizing these tournaments is to attract the attention of the government to the region as Gurez has great potential for winter sports activities. Last year the government opened Gurez for summer tourism and this place was also heavily promoted, which in turn attracted tourists throughout the summer.

The photographs and videos of snow cricket played on the frozen track at snow-bound Gurez valley, which is cut-off since December following the snowfall and is likely to remain disconnected for a few more months, are presently viral on social media and are attracting the attention of celebrities all over the world. (Snow cricket in Kashmir)

An Australian batting star, Marnus Labuschagne, who plays internationally for the Australian national team and domestically for Queensland also shared the video of young boys playing cricket over snow at Bagtore with a caption “how good is this”.

Fakhar-e-Alam, a famous Pakistani actor, TV host, and singer also shared the video of the cricket match played on a frozen track in Bandipora’s Gurez valley and wrote: “I wanna play cricket here with these guys….this looks so much fun..”

“Hope @BCCI @BCCIdomestic @SGanguly99 @IrfanPathan @ICC will support our younsters to perform on national and international level Gurez valley is full of talent needs little bit support from administration and Govt I assure starts will come from Gurez valley,” a local from Gurez wrote on Twitter.

The youngsters of three villages including Markoot, Achoora and Bagtore in the border valley of Gurez, have organized three snow cricket tournaments on the snowclad ground. According to locals, the only aim behind organising these tournaments is to attract the government’s attention to this area as there is a lot of potential for winter sports activities in Gurez.

With inputs from KNO