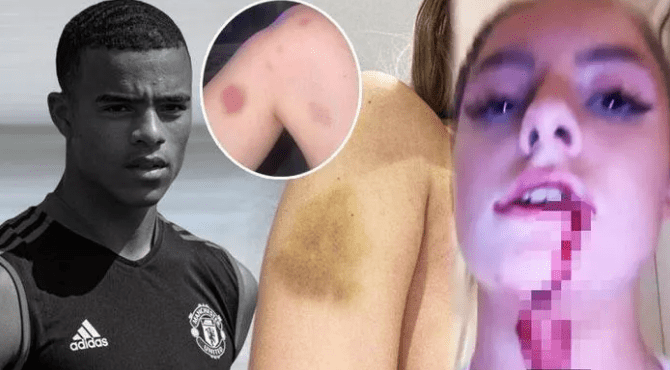 Ground Report | New Delhi: Mason Greenwood scandal Video; The Manchester United footballer, Mason Greenwood (20 years old), is being investigated for an alleged attack on his ex-partner Harriet Robson, after she published several images on her social networks of bruises and blood on her lip that allegedly caused her death. English player. The photos were deleted within hours.

Manchester United has published a statement in the British medium ‘Manchester Evening News in which it has stated that “we are aware of the images and complaints circulating on social networks” and that “we will not make any further comments until the facts”. However, the English club wanted to stress that “Manchester United does not condone violence of any kind.” Close sources point out that the English footballer will not play again with the United shirt until the situation is clarified.

United made the following statement in light of the posts: “We are aware of the images and allegations circulating on social media. We will not comment further until the facts have been established. Manchester United does not condone violence of any kind.”

The club followed that up by announcing that Greenwood had been suspended. “Mason Greenwood will not return to training or playing games until further notice,” his statement read.

Greater Manchester Police issued a statement to Mirror Football which did not confirm any names but said they were looking into the matter. The statement said: “Greater Manchester Police are aware of images and videos circulating on social media. Inquiries are underway to establish the full circumstances.” GMP has since confirmed that they have arrested Greenwood on suspicion of rape and assault.

A statement read: “Greater Manchester Police were made aware today (Sunday 30th January) of images and videos on online social media posted by a woman reporting incidents of physical violence. “An investigation has been launched and after inquiries, we can confirm that a man in his 20s has been arrested on suspicion of rape and assault. He remains in custody for questioning. Investigations are ongoing.”

Sportswear giants Nike, which sponsor the player, also issued a statement to The Athletic, which said: “We are deeply concerned about the disturbing allegations and will continue to monitor the situation closely.” In his first call-up to the national team, the striker snuck two Icelandic models into the team hotel along with Phil Foden despite strict quarantine instructions.

Three Lions boss Gareth Southgate ended up sending the United ace home, along with Foden. Greenwood is a rising star for United, where he earned the approval of club legend Sir Alex Ferguson, who considered him one of the best young players in the world.

He said: “He has the coolness and coolness of a great striker. “He never panics, his shots are always low, he’s always inside the posts. He has shown great qualities.”

The 20-year-old has made 24 appearances for the Red Devils this season, scoreng six times and has a contract until 2024, with an option to extend for another year. The striker has played once for England, coming on as a substitute against Iceland two days before his debacle at the team hotel.

He has not played for the Three Lions since Southgate said: “He is in our thoughts, I have spoken to him and his club, he is a player we like a lot.” Greenwood has been warned at United for a series of disciplinary offenses during his brief spell with the first team.

And this season there were rumors of a breakup with Cristiano Ronaldo, who arrived from Juventus last summer in a surprise reunion with the Old Trafford outfit. Reports emerged that the five-time Ballon d’Or winner had clashed with Greenwood over his reluctance to pass as the two seek to play the same position.