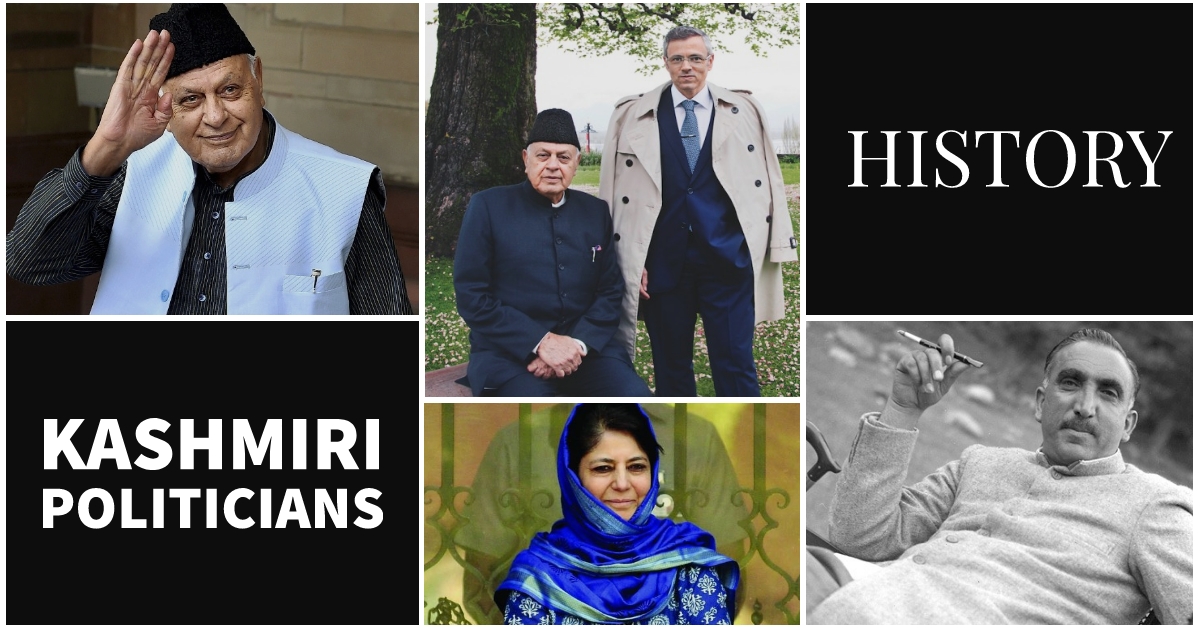 Kashmir politicians: Jammu and Kashmir neither have political nor religious problems, but the only issue is the mixed reactions of the residents of the state over the annexure of the state with Pakistan. Hence, many political leaders had their own way of doing things and brought in their own respective governments to handle the ever ongoing crisis in the state.

Following are the listings of some of the most famous and popular political leaders in the state of Jammu and Kashmir.

Bakshi Ghulam Mohammad was born in 1907 in the princely state of Jammu and Kashmir. He was educated at C.M.S Tyndale Biscoe School. He started his career as a school teacher in Jammu and Kashmir in areas like Skardu and Leh. He later served in the Kashmir branch of the All India Spinners’ Association.

In 1967 Bakshi was elected to the Lok Sabha on a National Conference ticket defeating the ruling Congress nominee, Ali Mohammed Tariq, by a big margin. He remained a member of the Lok Sabha till 1971.

(5 December 1905 – 8 September 1982) was a Kashmiri politician who played a central role in the politics of Jammu and Kashmir, the northernmost Indian state. The self-styled “Sher-e-Kashmir” (Lion of Kashmir), Abdullah was the founding leader of the Jammu & Kashmir National Conference and the 2nd Prime Minister of Jammu and Kashmir. He agitated against the rule of the Maharaja Hari Singh and urged self-rule for Kashmir.

He served as the 2nd Prime Minister of the Princely State of Jammu and Kashmir after its accession to India in 1947 and was later jailed and exiled. He was dismissed from the position of Prime Ministership on 8 August 1953 and Bakshi Ghulam Mohammad was appointed as the new Prime Minister. The expressions ‘Sadar-i-Riyasat’ and ‘Prime Minister’ were replaced with the terms ‘Governor’ and ‘Chief Minister’ in 1965. Sheikh Abdullah again became the Chief Minister of the state following the 1974 Indira-Sheikh accord and remained in the top slot till his death on 8 September 1982.

Sheikh Abdullah was born in Soura, a village on the outskirts of Srinagar, eleven days after the death of his father Sheikh Mohammed Ibrahim. His father was a middle class manufacturer and trader of Kashmiri shawls. He was a descendent of a Hindu named Ragho Ram, who was converted to Islam in 1722 by the saint Rashid Balkhi and after conversion changed his name to Sheikh Mohammed Abdullah, as per Abdullah’s autobiography Atish-e-Chinar.

As a student at Aligarh Muslim University, he came in contact with and was influenced by persons with liberal and progressive ideas. He became convinced that the feudal system was responsible for the miseries of the Kashmiris and like all progressive nations of the world Kashmir too should have a democratically elected government.

Farooq Abdullah was born to the veteran statesman and National Conference leader Sheikh Abdullah and Begum Akbar Jehan Abdullah. He studied at Tyndale Biscoe School, and subsequently received his MBBS degree from SMS Medical College, Jaipur. He subsequently travelled to the UK to practice medicine.

Abdullah was elected to the Lok Sabha unopposed from Srinagar Lok Sabha constituency in the 1980 General Election.

He contested the Srinagar Lok Sabha seat again in the 2014 General Election, but was defeated by the People’s Democratic Party candidate Tariq Hameed Karra.

In 2017, he won the closely watched by-poll for the Srinagar parliamentary seat by defeating Nazir Ahmed Khan from the People’s Democratic Party.

He has led the Indian National Congress, successfully in the 2002 Assembly Election in the Indian state of Jammu and Kashmir, and was appointed as the Chief Minister of J&K.

Ghulam Nabi Azad (7 March 1949) was the Minister of Health and Family Welfare. Presently, he serves as the Leader of opposition in Rajya Sabha.

He was born in the village Soti of tehsil Gandoh (Bhalessa) in Jammu and Kashmir’s Doda district. He was born to Rahamatullah Batt and Basa Begum. He went to school in his village. He moved to Jammu and finished his bachelor’s degree from G.G.M. Science College in science. Subsequently, he completed a Master’s in Zoology from the University of Kashmir in 1972

He is a poet and authored poetry book too and his poems featured in the poetry anthology, The Dance of the Peacock: An Anthology of English Poetry from India,[11] featuring 151 Indian English poets, edited by Vivekanand Jha and published by Hidden Brook Press Canada.

Omar is a scion of one of the most prominent political family in J&K, is also one of the most popular political leaders in Jammu and Kashmir. He was appointed 11th and the youngest Chief Minister of J&K. His party was in coalition with Congress party.

Omar Abdullah born 10 March 1970 one of the most prominent political families of Jammu and Kashmir, the Abdullah family.
He is currently the Leader of opposition in Jammu & Kashmir legislative assembly (Member of the Legislative Assembly from Beerwah constituency of Budgam district.)

He was a member of 14th Lok Sabha, representing Srinagar constituency of Jammu and Kashmir, India. He was the Union Minister of State for External affairs in Atal Bihari Vajpayee’s NDA government, from 23 July 2001 to 23 December 2002. He resigned from NDA government in October 2002 to concentrate on party work.

Omar joined politics in 1998, as a Lok Sabha member, a feat he repeated in subsequent three elections and also remained the Union minister; he took on the mantle of National Conference from his father in 2002, though he lost his own seat of Ganderbal during the 2002 state assembly elections, and so did his party, the political mandate; four years later, he contested once again from the same seat and won in the 2008 Kashmir State Elections.

One of the most powerful political leaders in Jammu and Kashmir, Mufti was elected as the Chief Minister twice. He was also the Home Minister of India from December 1989- November 1990. He is the founder of Jammu and Kashmir Peoples Democratic Party.

Mufti Sayeed was born on 12 January 1936 in Bijbehara town of Anantnag district to a family of clerics. He served twice as the Chief Minister of Jammu and Kashmir, from November 2002 to November 2005 and again from March 2015 to January 2016. He was also Home Minister of India from December 1989 to November 1990. He founded the Jammu and Kashmir Peoples Democratic Party in July 1999 to “persuade the Government of India to initiate an unconditional dialogue with Kashmiris for resolution of the Kashmir problem.

He completed his basic studies in Srinagar and earned his law and postgraduate degree in Arabic from Aligarh Muslim University before entering politics.

In 1989, within few days of taking office as the Union Minister for Home Affairs, his third daughter, Rubaiya, was kidnapped. She was released in exchange for the release of five militants. Sayeed also survived attacks on his life by separatists.

On 24 December 2015, Sayeed was admitted to the AIIMS hospital in New Delhi. He suffered from neck pain and fever. His condition gradually deteriorated, and he was put on ventilator support. He died on 7 January 2016 due to multi-organ failure at about 7:30, according to provincial Education Minister and PDP Spokesman Nayeem Akhter. He was just five days short of his 80th birthday when he died.

She was former Chief Minister of the state of Jammu and Kashmir. Being the President of Peoples Democratic Party she is also the first woman Chief Minister of Jammu and Kashmir. She is no doubt one of the most famous and powerful political leaders in Jammu and Kashmir.
She resigned on June 19 2018 after BJP withdrew support from the coalition government. She was the first woman to hold the office. Mehbooba Mufti is India’s second Muslim woman chief minister after Syeda Anwara Taimur of Assam. She is the president of the Jammu and Kashmir Peoples Democratic Party (PDP) and was a member of the Indian parliament, representing Anantnag in the 16th Lok Sabha; before she was sworn in as the Chief Minister of J&K. She had previously represented Anantnag in the 14th Lok Sabha (2004–09) but did not contest the 2009 election for the 15th Lok Sabha. She is a supporter of Jamaat e Islami.

She is the daughter of Mufti Mohammad Sayeed, born in 1959 in Akhran Nowpora. She earned her law degree from the University of Kashmir.

Her sister Rubaiya Sayeed was kidnapped (1989 kidnapping of Rubaiya Sayeed) when their father was appointed India’s Home Minister in 1989 and released after a few days in exchange for some terrorists. The release of the militants was condemned by the opposition and many hardcore nationalist of India.