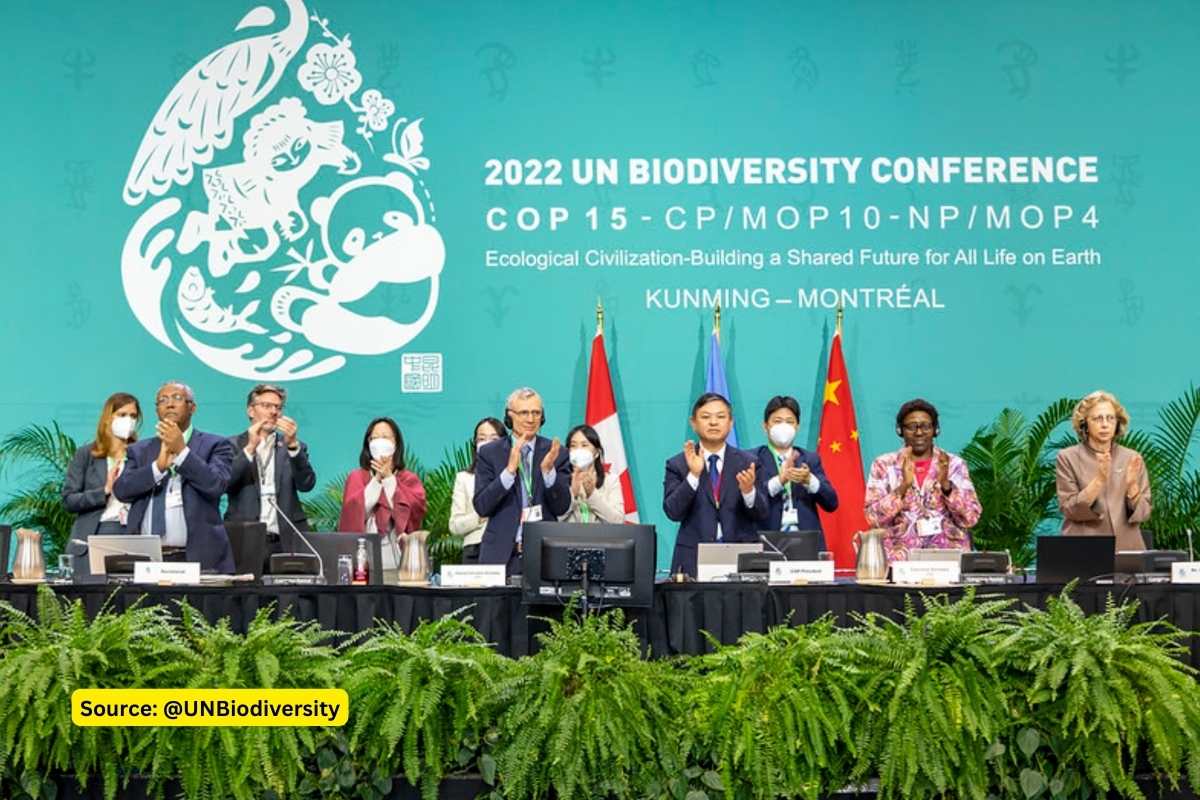 The COP15 adopted the Global Biodiversity Framework with 23 targets and 4 goals for 2030 in a landmark agreement. The Kunming-Montreal GBF replaces the Aichi Biodiversity Targets, which failed on a global level as no country met all 20 targets.

The Democratic Republic of Congo objected to the Framework, but it was adopted within minutes of the objection. Under Chinese presidency adopted the framework, without addressing the objection. This led to discontent among African delegates.

DRC mentioned that they can’t support the conservation efforts, and would require support from developed countries.

• Effective conservation and management of at least 30% of the world’s land, inland waters, coastal areas, and oceans.

• Have restoration completed or underway on at least 30% of degraded terrestrial, inland waters, coastal and marine ecosystems.

• Reduce to near zero the loss of areas of high biodiversity importance, including ecosystems of high ecological integrity.

• Reduce by half both excess nutrients and the overall risk posed by pesticides and highly hazardous chemicals.

• Countries made a commitment to enforce regular monitoring and reporting of the impact of operations by big companies in order to gauge the effects on biodiversity.

• “Harmful” subsidies that degrade the environment need to be identified by 2025 and subsequently reformed, phased out, or eliminated. Members committed to slashing them by $500 billion annually till 2030.

• Countries to ensure a reduced usage of pesticides by half and control of pollution caused by it.

• National action plans to be set up and reviewed, although no deadline has been provided as to the submission of these plans.

WHAT IS THE CBD?

The CBD was signed in 1993 in Rio de Janeiro. It is an international legally binding treaty for safeguarding biodiversity.  The governing body meets every two years to review past policies and formulate new ones.

The fifteenth meeting of the Conference of Parties (COP) to the Convention on Biological Diversity (CBD) was held in two phases. Phase I was held virtually from 11th to 15th October 2021, including a High-Level Segment (12th -13th October 2021), and Phase II from December 7th to 19th 2022 in Montreal, Canada.

OBJECTIVE OF THE MEET

According to WWF’s latest Living Planet Report, it has come to notice that wildlife has dropped by 69% since 1970. Millions of plant and animal species are on the brink of extinction. The planet is in the midst of a biodiversity crisis. Members of the CBD had gathered in Montreal for COP15 to give way to the Post-2020 Global Biodiversity Framework (GBF) and lay the path for the conservation of biodiversity worldwide by saving 30% of the planet by 2030.

PHASE I – The delegation heads and ministers adopted the Kunming Declaration during the High-Level Segment held during Phase I. The declaration mentioned the formulation, adoption, and effective implementation of a Global Biodiversity Framework to put the loss in biodiversity on a global scale on its path to recovery by the end of the decade.

After the parties failed to achieve most of their targets after CBD adopted the Aichi Biodiversity Targets, the Kunming Declaration laid specific focus on the implementation of the GBF.

PHASE II – The second phase of COP15 was concluded on 19th December 2022 with a global deal aiming to protect the rapid loss of biodiversity faced by the world. The conference was presided over by China and hosted in Montreal, Canada.