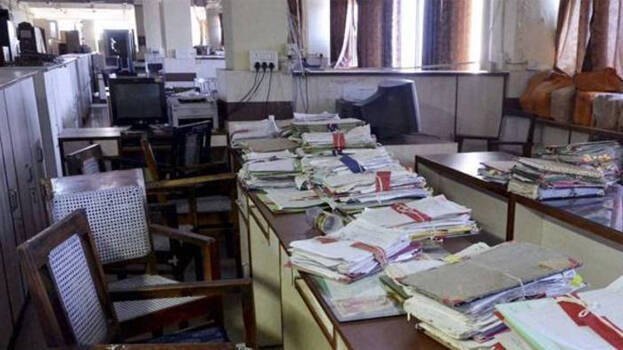 Jammu and Kashmir administration has begun a process to terminate services of 500-1000 of the employees allegedly involved in anti-national activities, posing threat to security and integrity of the Jammu and Kashmir”, could be dismissed in the next two or three months.

An order issued by the government announced the constitution of a committee headed by Chief Secretary BVR Subrahmanyam to take stock of all such cases that would be referred to it by the police and home departments.

Article 311 of the Constitution empowers the government to dismiss the employees on the basis of an enquiry. However, most of the government employees’ dismissal orders in the past, when Jammu and Kashmir was a State, had been quashed by courts as the aggrieved petitioners disputed the procedure or called the inquiry as ‘flawed’. Now the UT government has invoked Clause (2)(c) of Article 311 that dispenses with the prerequisite of inquiry in the matters where the President or the Governor, as the case may be, is satisfied that in the interest of the security of the State, it is not expedient to hold such inquiry.

Under the GAD order, the Government has constituted a 6-member committee which would be processing for dismissal or reduction of rank all the cases to be referred to it by any department or Police through Home Department after scrutiny. Chief Secretary, Secretary GAD, Secretary Law, Secretary Home, Director General of Police and Additional DGP Criminal Investigation Department have been appointed as its members.

This provision would be applicable to all those employees about whom there are cases of having taken part in the “anti-national” activities overtly or covertly. It will also apply to those who have served detention.

Government of J&K has learned that a section of its employees are proactively promoting anti-India hatred, assailing New Delhi’s decision of August 5, trolling and threatening politicians, government officers and business tycoons on social networking sites including WhatsApp, Facebook, Twitter and others.

As per the reports around 200 top officers from civil and police departments are in league with militants against whom legal action is pending due to some technical hitches since long. They said Government has now collected concrete evidences against these employees in this regard and soon a big chunk of government officers besides others will be terminated from their services.

“Concrete and tangible evidences have been collected by different agencies against employees who are promoting anti-India narrative and soon their termination orders from their services will hit the stands” local agency KNS reported.

He said in past there were some technical glitches in their termination but the present dispensation is determined to take tough action against such employees who are fanning violence and creating law & order troubles on ground by their physical participation.

In past there were some technical glitches in their termination but the present dispensation is determined to take tough action against such employees who are fanning violence and creating law & order troubles on ground by their physical participation.