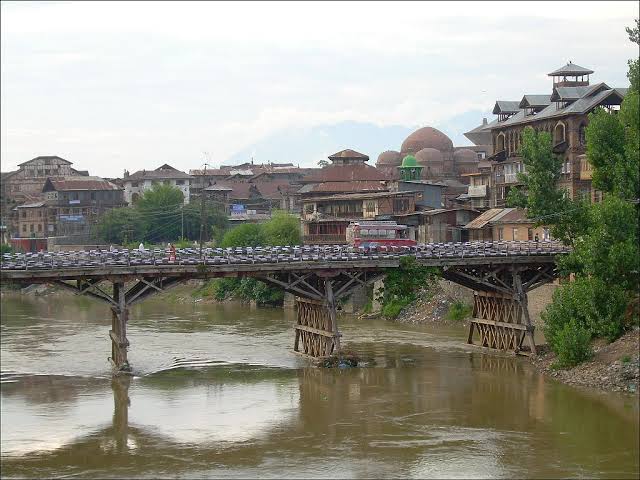 Srinagar, the summer capital of Jammu and Kashmir, was famous for housing seven bridges is fast losing its pride of being a city of seven bridges.

Out of the seven original wooden bridges that existed in the J&K, only two old wooden bridges while as alternative new bridges have come up parallel to the older ones.

Nonetheless, only two old bridges, which have been renovated from time to time including Habba Kadal and Zaina Kadal exist in Srinagar while the old bridges at other places don’t exist anymore and new bridges have come up at the places.

Maximum of the bridges as per locals have been damaged in fire incidents during the initiation of militancy in Kashmir, saying that the new bridges were constructed at a few yards far from the already existing old bridges.

Of two existing old bridges, Zaina Kadal has its own historical perspective as this bridge was constructed by Zainul Aabideen in the 15th century, Ghulam Hassan, an elderly man sitting on the old copper shop, said.

He added that this bridge was personally constructed by Zainul Aabideen, who was also known as ‘Badshah’ (King), saying that the base of this bridge was made of Deodar logs, which unfortunately was later replaced by some blue-eyed people while renovating the historical bridge.

“A new bridge was in consideration at the site of old bridge, but unfortunately a huge amount was wasted and no bridge was constructed,” the elderly shopkeeper said, adding that this bridge is not getting proper attention by the government as huge garbage could be seen piled up at the base of this bridge, which should have been frequently removed.

Zareef Ahmad Zareef in a video is describing Srinagar thoroughly in which he stated that the first bridge was constructed is Aali Kadal by Shah Miri Sultan, Ali Shah in 1415 AD.

He said that the second bridge was constructed by his brother, Zainul Aabideen , who ruled Kashmir from 1420-1470 (Fifty years three months and 21 days), the period known as golden period. He constructed the Zaina Kadal Bridge in 1427.

Later Fateh Shah constructed a third bridge known as Fateh Kadal in 1500AD, he said, adding that Habba Kadal was constructed by Habib Shah in 1573 AD.

These were seven bridges, which were famous and people in these localities were known to each other properly, he said, adding that later some more bridges were constructed by Bakshi Ghulam Muhammad including Budshah Kadal and Zero bridge in 1957 while Cement bridge was constructed during Sadiq rule.

The old Fateh Kadal, which was constructed in 1500 AD was turned into Foot Bridge during Mufti Muhammad Sayeed’s rule.

This reporter during a visit to the localities nearby these seven bridges told KNO that Old bridges like at Nawa Kadal and Safa Kadal were damaged in fire incidents following which new bridges were constructed at the nearby place.

Habba Kadal as per the locals was renovated in 2013 to 2015 to keep this wooden bridge preserved as heritage.

Nonetheless, the other old bridges including Nawa Kadal, Safa Kadal, Amira Kadal, Fateh Kadal and Aali Kadal doesn’t exist anymore as new bridges have been constructed by the successive regimes at the place. KNO