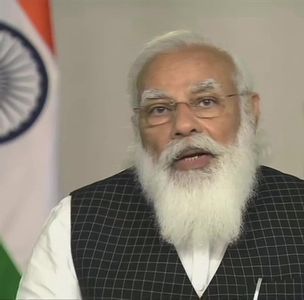 During the meeting on increasing cases of covid virus infection and vaccination, PM Modi said that India is one of the countries where the death rate is very low.

In the Chief Ministers meeting, PM Narendra Modi said, ‘More than 96% of Corona cases have been recovered in India. India is one of the countries where the average death from corona is much lower.’

PM Narendra Modi said that we have to stop the second wave of Corona. For this, we have to take swift decisive steps.

PM Narendra Modi said that we have to take fast steps so that people get relief from problems. We have to work using our past experiences.

PM Narendra Modi said, ‘Corona infection has increased in many districts, which till now were safe zones. In the last few weeks, corona cases have increased by 150% in 70 districts. If we are not able to stop the corona infection here, the situation may worsen again and there may be an increase in corona cases all over the country.

ALSO READ: Major Reshuffle In Bureaucracy In Jammu And Kashmir

PM Narendra Modi said that it is a matter of concern that why testing is less in some areas? Why has vaccination decreased in some areas? This is a time when there will be an examination of good governance. Our confidence should not be turned into overconfidence. Our success may prove useless by ignoring the threat of Corona.

In the Chief Ministers meeting, PM Narendra Modi said that we have to stop the second wave of Corona from emerging immediately. We have to take decisive steps immediately.

Anticipating the new wave of corona infection, PM Narendra Modi said that there are many countries where corona has emerged many times. In our country too, corona cases have increased again in some states.

Chief Ministers have also expressed concern about this. States like Madhya Pradesh and Maharashtra have very high positivity rates and the number of new cases is increasing rapidly.