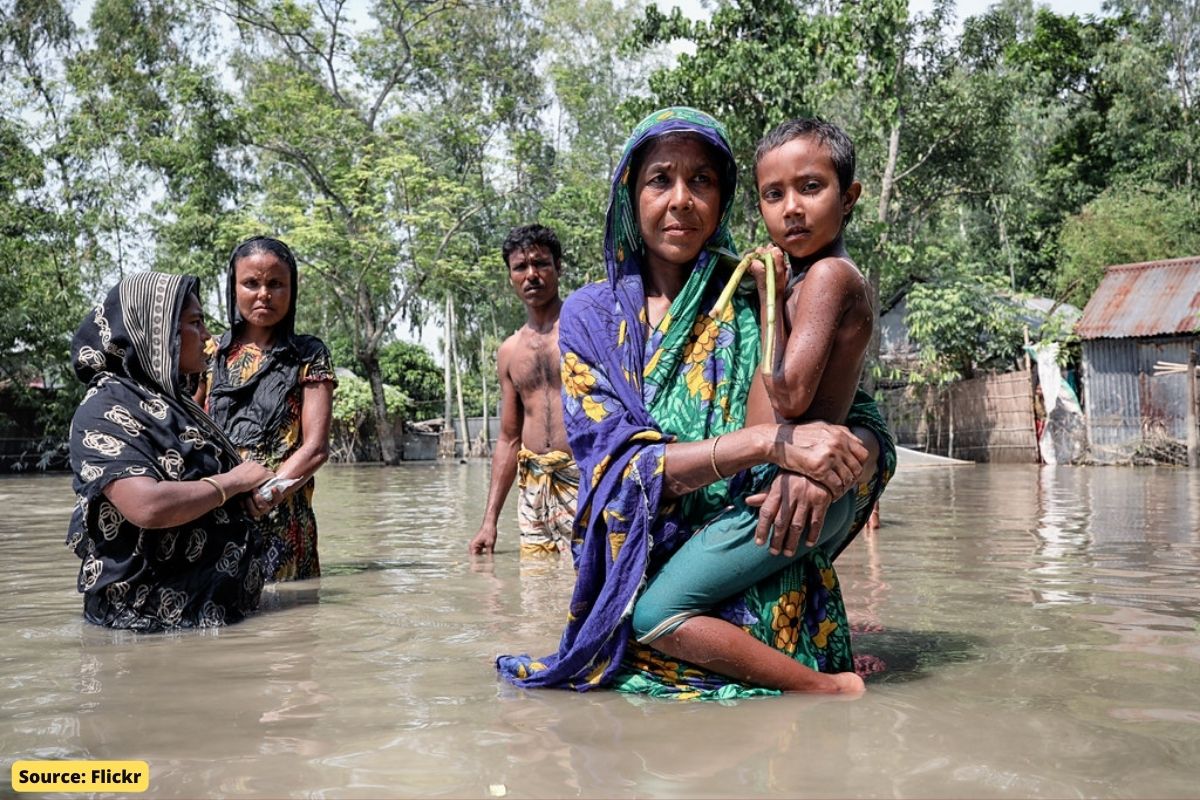 The consequences of climate change affect women more and in very different ways than men. This is pointed out by several reports from international organizations, which highlight the need to take into account the gender issue in order to deal with this environmental problem more fairly and effectively.

80% of refugees are women

The impact of climate change not only hinders access to natural resources and increases poverty, but also – and inevitably – gender inequality: 80% of climate refugees are already women. According to an analysis by the Boston Consulting Group, current strategies for adapting to the environmental crisis could still delay the achievement of gender equality by 15 to 20 years.

Professor Ruiz Ramos delves into this reality with two key explanations to understand why climate change widens the gender gap. On the one hand, she explains, there is the fact that some consequences specifically affect women to a greater extent, something that is especially evident in developing countries.

The effects of climate change work “like any economic stressor”, which enhances crisis situations and, usually, women are worse off in these contexts. All this means that, both directly and indirectly, women are much more affected by the situation.

Thus, for example, 80% of climate refugees are already women, as recalled in a study on climate change and gender by the Women’s Institute.

The United Nations itself also warns that climate change has already affected food security and food scarcity, access to drinking water and has caused a loss in biodiversity that affects the survival of those who live connected to it.

All these contexts have made the subsistence of the inhabitants of the affected areas more precarious and, above all, it has made women much more vulnerable.

“Poverty has a woman’s face,” says Tatiana Nuño. It is a reminder similar to the one launched by the United Nations: women are “the majority of the world’s poor.”

Women, most affected by climate change

The World Health Organization (WHO) has published the report “ Gender, climate change and health”, which it shows that many of the health risks that climate change could affect vary according to sex. Climate-influenced natural disasters, such as droughts, floods and storms, kill more women than men, especially young girls, according to the study’s authors.

Climate change measures that take women into account are fairer and more effective.

The differences between men and women in their life expectancy are usually greater in the face of serious catastrophes, especially in poor socioeconomic situations for women. Other climate-influenced health outcomes, such as malnutrition and malaria, also differ considerably by gender, the WHO says.

The NGO Oxfam International highlights the relationship between poverty, gender and climate-related disasters while maintaining that women are the pillars of societies. According to those responsible, when natural disasters occur, they affect the poorest communities first and with more intensity. And since women make up 70% of the population living below the poverty line, they bear the heaviest burden.

Women produce up to 80% of the food in most developing countries, since they are in charge of farming the land, and fetching water and fuel, issues that are highly affected by climate change, according to Oxfam. In addition, they deal above all with the family, educating children and caring for the elderly and the sick. Therefore, the experts of said NGO conclude that women are at the forefront of the disastrous effects of climate change and determine the ability of communities to adapt or recover.

Along the same lines, the WHO report recalls that women contribute considerably to disaster reduction, usually informally. For this reason, according to this international organization, many disaster response programs highlight the importance of having women as fundamental actors.

The increase in gender-based violence following a climate catastrophe was mentioned in all the presentations. According to input from the Geneva Center for Security Sector Governance, gender-based violence is prevalent in conflict zones, which, in turn, are also more at risk of extreme weather events. For example, women and girls in Colombia, Mali and Yemen are at particular risk of gender-based violence due to the combined effects of climate change, environmental degradation and conflict.

Also Read:  Why can earth's temperature rise 3.2 degrees before end of century?

Child marriage, also considered an act of violence against girls, has been observed in several communities as a means of coping with disasters, according to communications. In Bangladesh, Ethiopia, and Kenya, for example, child marriage is a way to secure funds or assets and recoup losses incurred due to climate-related disasters, such as drought, repeated flooding, and more intense storms.

“The world will be able to achieve the core goals of the Paris Agreement of limiting the global average temperature rise to 1.5 degrees Celsius unless all of humanity engages in the fight against climate change,” Newman said. “While it is worrying to see a reversal of recent gains on equality due to the COVID-19 pandemic, there are positive signs that climate policy is increasingly creating opportunities for women and girls to make invaluable contributions to climate change. climate action and benefit from it.

The report highlighted how women are agents of change. When they have equal access to decision-making opportunities, they make more sustainable decisions, for example, improving their children’s school attendance rates, increasing food security, greener mobility patterns and reduction of energy demand.

In addition, adaptation to climate change may lead to opportunities for women to access more resources and participate in decision-making due to changes in gender norms, so adopting an approach that takes these into account is crucial. issues in climate policy development. In addition, it has been shown that inclusive governance, promoted by international organizations and national governments, can lead to long-lasting and effective climate-resilient policies that lead to an improvement in social equity in general, and gender equality in particular, by integrating more women and marginalized groups into decision-making.

How climate change affects women the most

The negative effects of climate change on women are felt in many different ways. Most studies in Europe show that women are at a higher risk of dying in a heat wave, both in absolute and relative terms.

Differences are also shown in terms of indirect and long-term effects. In developing countries, droughts reduce the availability of water for drinking, cooking and washing. Women are also responsible for travelling long distances to fetch water, with the added risks that this entails.

The inefficient burning of biomass in homes without ventilation releases large amounts of black carbon into the atmosphere, one of the main contributors to climate change, according to the FactorCO2 consultancy specializing in offering solutions to global warming. The WHO recalls that black carbon causes about two million deaths a year, mainly among women and children in the poorest parts of the world.

Women are more likely to die in a catastrophe than men, they also point out Oxfam. According to this NGO, in general, they have more difficulty accessing resources and basic services before and after a natural disaster. For its part, the WHO report ensures that women tend to have much less access to essential information on weather alerts and farming methods, which affects their ability to respond.

Ultimately, evidence of gender differences in climate change should lead to responding to its consequences in different ways. If the policies and actions to combat this environmental problem ignore the gender issue, inequalities will inevitably increase.